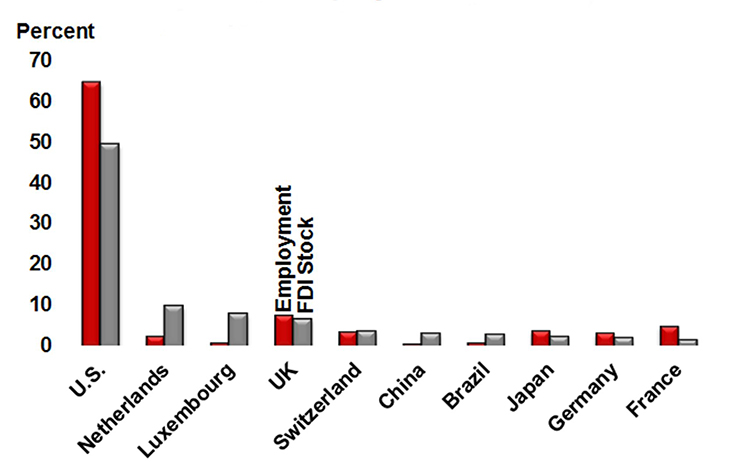 It is probably no surprise that most foreign‑controlled firms in Canada originate from the U.S. But, there is a substantial difference depending on if one looks at FDI (financial flows), which is what has traditionally be done, compared to employment, which is now possible. FDI data reflect that some countries are important conduits for investment flows due to favorable corporate and tax environments. Employment data, however, reflect the ultimate owner of investment.

Looking only at FDI stock in 2013, the U.S. accounts for less than half of foreign investment in Canada, and the Netherlands and Luxembourg are the second and third most important investors in Canada. These last two, however, are good examples of nations that are conduits for investment. Employment data show that U.S.‑controlled enterprises account for about two‑thirds of employment while the United Kingdom and France are the second and third‑largest foreign employers in Canada; they are important ultimate investors.

Newly available data allow us to get a clearer picture of the important role of foreign‑controlled firms for the Canadian economy and which countries are investing in Canada.

Learn more about the Office of the Chief Economist.