A place for Canadian infrastructure companies that like a challenge

Designing a new airport for the north coast of Bali in Indonesia has been a leap of faith for Airport Kinesis Consulting Group Inc.

The Montreal-based consulting company, which specializes in designing energy-efficient and environmentally sensitive airports around the world, got involved in the project a couple of years ago at the request of Bali’s governor. Airport Kinesis carried out feasibility studies and developed ten different business plans for individual aspects of the airport. It finally put forward an ambitious proposal to build the facility on the sea, using a land extension process and locating its second runway on a unique hydro-elastic floating platform that is very large. It then assembled a group of private equity investors, airport operators and venture capitalists to finance its development and construction. 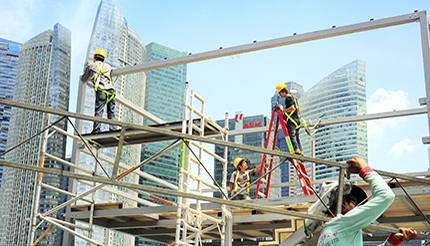 Airport Kinesis did all of this in only nine months with a team of 22 people at a cost that added up to $700,000. Yet it only recently got paid and was formally asked to work on the project, which will mean healthy revenues for the company going forward, says Shad Serroune, the firm’s vice-president and chief technology officer.

“It was an investment on our part,” explains Serroune, head of the airport and project engineering division for Airport Kinesis, which has 35 staff and 13 offices around the world. He notes that the situation is not unusual for infrastructure initiatives in Southeast Asia. “You definitely have to be prepared for complicated work there.”

His advice resonates among Canadian SMEs that are looking to take advantage of burgeoning infrastructure opportunities in the Association of Southeast Asian Nations (ASEAN), which comprises Brunei, Cambodia, Indonesia, Laos, Malaysia, Burma, Philippines, Singapore, Thailand and Vietnam. Prospects in the fast-growing region are lucrative but deeply complex, requiring presence, persistence, patience and fortitude from Canadians if they want to get involved in the giant infrastructure builds there.

“We’re seeing potential for huge success in ASEAN,” says Mark Nicol, Director of Sales and Operations in the Asia Pacific region for Echologics, a company based in Mississauga, Ontario, that specializes in developing technologies for the water industry. “ASEAN is too big not to look at.”

Echologics has established a regional office in Singapore, where it has a major contract with the municipal water department. It uses acoustics to non-invasively assess the condition of underground pipes and detect leaks. This allows authorities to better understand their water infrastructure and prioritize capital spending without breaking ground or disrupting service.

Studies show that in some countries more than 30 percent of treated water is lost through leakage or pilferage, says Nicol, and the World Bank estimates the cost to utilities of such “non-revenue water” at US$14-billion per year. He notes that his company is focusing on Southeast Asia because it presents “vast opportunities” and its markets are relatively easy to enter.

Serroune says that one important factor in Southeast Asia is the support of the Canadian Trade Commissioner Service (TCS). For example, it brought Airport Kinesis along on an airport-related trade mission to Indonesia and The Philippines in November 2013 that included meeting with the governor of Bali and hearing about the business opportunities associated with the planned airport. The trip and the encounter put his company on the fast-track for the project.

“They teach me a lot,” he explains, “because they know exactly how the country works” and provide help when he cannot always be on the ground there. “They are my eyes…It’s like I’m always in Indonesia.”

He says such companies are best to focus on smaller-scale infrastructure projects with challenging engineering issues to tackle. “That is our sweet spot; Canadian companies excel at solving problems,” he says. “Anyone can slap some concrete down and make a basic toll road; we look at ways to make it innovative and address specific challenges, whether it is engineering design, environmental or otherwise.”

Other things that Canadian companies are good at include implementing public-private partnerships, known as P3s or PPPs, where he says we have lots of experience, as well as acting in an advisory role and verifying projects. Companies like Airport Kinesis are “good news stories,” he remarks, because they identify niches, work with local partners and offer technologies and capabilities that fit.

Serroune, whose firm specializes in designing zero-energy airports, says that Canadian companies like his recognize the value of the unique solutions and high standards that Canada brings.

“I will use this airport like a showroom in Southeast Asia of what Canadians can do,” he declares. “For me there is no choice…Canadian companies are highly expert in the aerospace and infrastructure field, and there is no other alternative than bringing all of the Canadian companies and technologies in on the project.”

Nicol says that Canada has a “proven track record” of producing high-quality and long-lasting solutions that may require a higher initial investment but show a return in the long run. The leading-edge technology that Echologics offers is especially an example of this, he acknowledges. “Cost is often seen as a barrier by the client, but they do understand that it’s worthwhile to have access to leading technologies.”

Money in the region has tended to be directed toward creating new infrastructure, such as water treatment plants, as opposed to fixing the existing water pipes or stopping water theft, although “that attitude is changing,” he says. The World Bank and Asian Development Bank increasingly insist that countries improve the efficiency of existing infrastructure, as well as using better-quality materials and workmanship in their efforts.

Dodjie Fabian, a trade commissioner in Manila who co-ordinates a team of seven trade commissioners specializing in infrastructure across the Southeast Asia region, says it can be difficult for new players with more expensive solutions to enter entrenched low-cost markets such as The Philippines. Echologics has been successful there because water losses are costing the country, water districts and concessionaires tens of thousands of dollars, he says, noting that Canada has particular expertise in the field of leak-detection technology.

Serroune notes that countries like Indonesia can be frustrating to work in because they don’t have the funds immediately available for infrastructure work. “You need to provide a turn-key solution, including the money,” he says, which usually means some sort of PPP, which is a new concept so it requires education and time to be accepted. “You have people who want to do great things, but who don’t want to take all the risks, so we have to share the risks with them.”

Such efforts benefit from a local presence because “you need to build trust with people,” he says. “You need to be there all the time.” Indeed, Serroune stayed in Indonesia for two months simply to try to understand how the country works.

“If you can win the hearts and the trust of the Asian people, you can definitely do business there,” he observes, noting that “keeping your word is crucial.”

Reynolds says that many companies make the mistake of trying to be in too many ASEAN markets at once, for example, travelling to the region and visiting four or five countries for one or two days each. “You’ve probably just wasted a lot of your money and your time,” he warns, suggesting that companies instead focus on one market and “be strategic”, staying at least five business days in one place. “The most valuable business meetings will come on day four or day five.”

Such meetings usually end up including your client’s or partner’s extended family, a far cry from the “impersonal” way things are done in North America, he says. “Business done this way is more enjoyable and enriching.”

Francisco Goncalves, president director of McElhanney Engineering’s operation in Indonesia, which is currently carrying out a project in Cambodia using LiDAR (Light Detection and Ranging) and digital aerial photography to allow archaeologists to study the history of the Khmer Empire, says that it’s important to develop local capacities and be prepared for long-term projects.

He says the TCS can help find trusted local contacts and partners who know the territory. “They also know the ones you shouldn’t touch,” he adds.

Nicol says it’s critical to find local partners who are honest, open and fair. “We have to make sure we are working in an ethical and transparent way,” he says, as well as ensuring that health and safety standards are met. “You have to keep your eyes open at all times and be aware of what’s going on.”

Echologics chose Singapore as a hub and a first place to implement its water-pipe solutions in Southeast Asia because of its use of English and ease of doing business. The approach is also helpful because Singapore is a “technology adopter,” and is a good place for Echologics to develop solutions tailored to Southeast Asia as a whole.

The company is not looking at opening businesses in every Southeast Asian country but selected markets such as The Philippines and Malaysia, he says, where it can establish strategic partnerships and identify clients who are most likely to use its technology. The prevalent use of English in these two countries is also a plus factor in its choice.

Foreign companies have to be sensitive about not looking like they're rushing in to the region to “take over” and make money, Serroune cautions. “We are there to do business, to have a long-term relationship with them and to be strategic partners in nation-building,” he says. “We don’t come just to take. We want to be part of Southeast Asia’s success.”

There are also challenges associated with political risks; frequent turnovers in the various levels of government involved in a project can prove problematic. For example, a mayor who’s going to be challenged at the ballot box in six months is not going to take controversial decisions, Serroune says. “You speak with someone today and two months later the same guy is not in the same position. You have to start from scratch.”

Coming up with creative solutions and workarounds is also part of the equation in Southeast Asia. In the case of the North Bali project, he says, the airport is built on a new generation of platform, allowing the biodiversity and the environment not to be harmed. The project master-plan is designed in three phases; the first phase of the airport will accommodate 12 million passengers a year, while the second will increase the capacity to 24 million passengers. As it grows, other infrastructure such as the road network around the facility will need to be enhanced as well.

Transportation networks are especially growing in Southeast Asia as a new common visa and changing demographics bring added mobility, Serroune says, vastly increasing the number of travellers within and between countries.

The TCS connection means “we have the complete support of the Canadian government,” he points out, which helps when dealing with local officials and investors alike. “It gives you the credentials you need.”

Nicol notes that the TCS has helped Echologics understand legal requirements and tax obligations, providing feedback and “mitigating the risk to some extent.” The TCS has set up social networks and assisted the company in “promoting Canada’s brand,” he says. “It’s helpful to highlight to the region the value of Canadian companies.”

He advises those interested in working in Southeast Asia to “be committed to putting resources into it,” noting that the investment is paying off for Echologics. “We’re closing deals,” he says. “It’s a great position to be in.”

Getting involved in infrastructure in Southeast Asia is a good test of a company’s abilities in many ways, Serroune says, especially because it is a dynamic “greenfield” region that “likes to try things and is pretty open to new technologies.” Airport Kinesis pursued the North Bali project “because we love the challenge,” he adds. “If you can do business in Southeast Asia, you can do business anywhere in the world.”