This article is part of a special CanadExport series exploring the links between business and exporting, and Science, Technology and Innovation.

Average Annual R&D Expenditures by Foreign Enterprises in Canada,
2010-2013, by Country of Control (%) 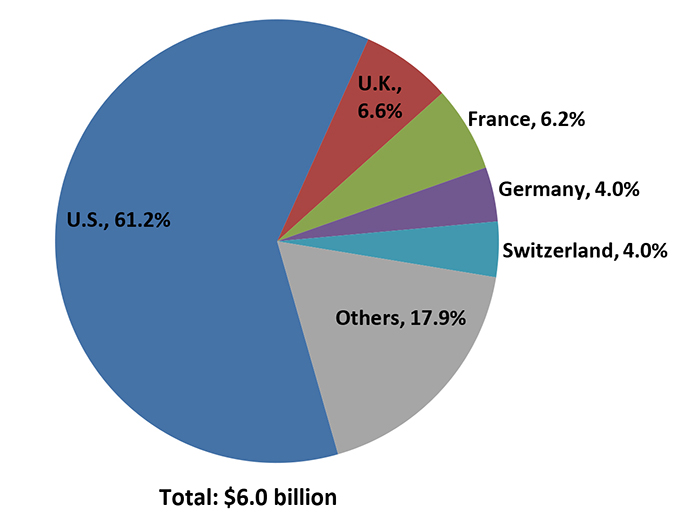 Foreign enterprises contribute a considerable amount to R&D spending in Canada, making up 36.6 percent—almost two fifths—of all R&D expenditures in the country on average, over the period from 2010 to 2013. The majority of the amount stems from United States enterprises, responsible for 61.2 percent of R&D spending in Canada by foreign entities. The figures come from a new set of data recently released by Statistic Canada related to the R&D activities of foreign enterprises in Canada. The data includes the total amount of money spent on R&D and the number of personnel employed in Canada.

In absolute values, an annual average of $6.0 billion was spent on R&D expenditures by foreign enterprises, with an average of 39,000 employees involved in R&D activities. Foreign enterprises were more R&D-intensive than domestic companies in that they employed 12.1 percent of all workers in Canada, but more than one quarter (27.6 percent) of all R&D employees.

Foreign enterprises in Canada refer to foreign majority-owned affiliates in which the majority of voting shares—that is more than 50 percent—are held by a person or entity in another country.

Foreign direct investment plays a significant and positive role in Canada’s economic development. In fact, from an employment perspective, foreign enterprises have been responsible for an increasing share of total employees in R&D—up from 26.5 percent in 2010 to 29.5 percent in 2013.