When Canadian space industry representatives met with their counterparts in Brazil during an event for the new Canadian International Innovation Program (CIIP), the results were out of this world.

The CIIP event—called the Second Canadian Space Mission to Brazil—took place in March 2016 in São José dos Campos, a major centre of the country’s aerospace industry. It focused on research and development (R&D) collaboration opportunities between Canadians and Brazilians in the aerospace sector.  The “mission” was a partnership development activity organized under the CIIP, a program that fosters and supports industrial R&D projects with high potential for commercialization between Canada and partner countries. 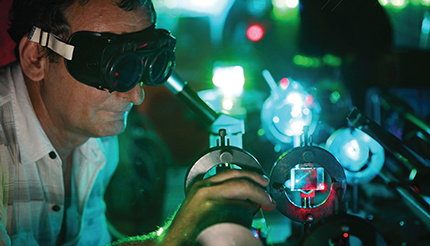 “These kinds of tools help potential research partners take the first step,” says Jean de Lafontaine, president and founder of NGC Aerospace, a company in Sherbrooke, Quebec, that makes guidance, navigation and control solutions for satellites and other applications, such as space landing systems and autonomous vehicles. NGC participated in the Brazil mission and is hoping that the CIIP will help finance its collaboration with Brazilian partners in fields such as satellite imagery, he says.

Announced in March 2015, the CIIP will fund industrial R&D projects between Canada and partners from countries with which we have bilateral science and technology agreements—Brazil, China, India, Israel and South Korea.

The bi-national initiative helps Canadians get their innovations out into the global market, says Vanessa Podgurny, a trade commissioner responsible for the CIIP.

“The goal is commercialization of Canadian innovations,” Podgurny notes, which can especially be challenging for small and medium-sized enterprises (SMEs).

The program will ultimately support the creation, adaptation and validation of technologies involving Canadian companies and their international partners. Calls-for-proposal have begun for projects in India and Israel, for example.

Meanwhile, Podgurny says, the CIIP is focusing on related “get-to-know-you” activities—like the space mission event in Brazil—facilitated by the Canadian Trade Commissioner Service (TCS). The companies attending events get one-on-one time to meet, for example discussing their business models and plans for innovation.

“It builds the environment to support collaboration later on,” Podgurny explains, adding some companies will end up working together without additional funding from the CIIP. For those that do get support, the CIIP provides $1 million per country per year, funding projects of up to $600,000.

“Canada has a huge capacity in technology; we have some of the best-trained engineers and the best science minds out there,” she says, although it is often challenging “to take that science and get it to market” because Canadians “are a little risk-averse,” and somewhat satisfied with the status quo.

“For Canada to grow and increase market share, they have to go abroad.” Programs like the CIIP help reduce some of the risk, while the TCS “does a lot of leg-work” on behalf of companies. “We put the right person in front of the right person,” she remarks.

The Canadian International Innovation Program (CIIP) may be right for your company if:

The CIIP can benefit Canadian companies by:

The TCS “acts as a matchmaker,” putting together partners to pursue such opportunities, she says, often working with other government agencies and departments such as the National Research Council, Canadian Space Agency and Agriculture and Agrifood Canada. The CIIP program is delivered in collaboration with the National Research Council of Canada Industrial Research Assistance Program (NRC-IRAP) for Brazil, China, India and South Korea.

Themed “Building Bridges,” the Brazil event included a session on the CIIP and a day of workshops and discussions with leading researchers at the Brazilian Institute of Space Research (INPE). Representatives of 24 companies from both countries—20 of them SMEs—attended the two-day event. The TCS organized side networking opportunities and site visits for 120 participants, including 86 one-on-one meetings between Canadian and Brazilian space companies. A total of 21 opportunities for R&D collaboration were identified between the INPE and Canadian participants, who were able to discuss, clarify and present their solutions to their research counterparts on the spot.

Alex Krell, a trade commissioner in São Paulo responsible for the aerospace sector, says that Brazil and Canada have established “a high level of dialogue” on space collaboration at the government, academic and business levels in order to respond to Brazil’s demand for space-related technology and expertise. The country is looking for strategic partners to develop its space capabilities, in order to address the challenges of border and maritime surveillance, telecommunications, natural disaster prevention and response and rainforest conservation, among others.

Jean de Lafontaine of NGC Aerospace says Canada and Brazil have much in common, such as their large land masses and natural resources to monitor, which means the two countries are looking for similar satellite-based solutions. At the same time, Canada and Brazil have different competencies in terms of satellite technology, he notes.

His company is developing techniques and software that correct the image distortions caused by satellite inaccuracies and imperfections. The technology is of particular interest to a Brazilian company called AMS Kepler, with which NGC already is collaborating, without an exchange of funds, as well as to the INPE. NGC is interested in having access to the satellite images produced by AMS Kepler to test and validate its software, de Lafontaine says. Cooperation between such entities is a good application of the CIIP program, allowing partners to share in the development of technologies, he notes. “It’s a give-and-take situation.”

While the mission allowed NGC to present its products and meet key people in the industry, deals take time, de Lafontaine says. “You have to be patient.” The TCS is “always ready to help,” from knowing the players to keeping links with key personnel in the sector.

“In Brazil the human relationship is even more important than the business relationship,” he comments, and programs such as the CIIP can assist in breaking the ice. “It helps when you have this card in your hand that you can play.”

Krell says the CIIP can assist companies like NGC both by potentially funding research and also by supporting their overall international R&D partnership and commercial initiatives. The TCS in turn adds value to the CIIP “by leveraging its deep understanding of the market and extensive local networking to further new partnerships and accelerate the commercialization of research and development.”

NGC is a perfect example of Canada’s leading-edge expertise in space science, research and engineering, Krell says. “We are also proud of NGC’s targeted commercial internationalization and active approach to new growing markets such as Brazil.”

The TCS has supported NGC in each market where it does business, including Brazil, by providing the company with qualified contacts, market analysis, problem solving and, most importantly, identifying and creating opportunities. The CIIP is an excellent tool both for companies and the TCS, fostering important international R&D partnerships “that will be the vectors of commercial opportunities in the future,” he says.

The CIIP also helps build bridges at a government-to-government level, Krell notes, by engaging science, technology and innovation counterparts on both sides “and thus creating the perfect framework for private-sector collaboration and mutually beneficial commercialization.”

Bridging the gap in terms of finding specific projects of mutual interest for SMEs in Brazil and Canada is a critical task for the TCS. “With a deep understanding of both Brazilian and Canadian companies’ capabilities, needs and business plans, the TCS can identify complementary capabilities that can be leveraged to achieve common results,” he explains. “It takes more than a mere introduction for that kind of strategic partnership at the R&D level to really take off.”

Other partnership development activities under the CIIP similar to the aerospace event are planned in Brazil, for example in the information and communications technologies (ICT) and health sciences sectors, he says.

The TCS can assist at every turn to bring about a positive outcome for both parties, Krell says.

“In most cases, building trust with the help of the TCS is the first step.” As a result of initiatives like the CIIP, he adds, “we have managed to position Canada as a leading partner, given the competence of our space industry.”