There are many twists and forks in the road from idea to export and while taking the right path can lead to global markets, a wrong turn can lead to a dead end. 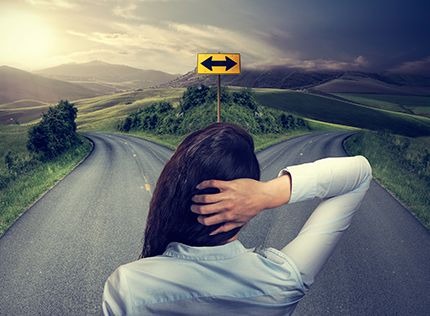 “That’s how entrepreneurs and inventors think: they are trying to solve a problem, they see a gap and they create a solution  to fill the gap,” says Drisdelle, who works out of a satellite office nestled in MaRS Discovery District in downtown Toronto, the world’s largest urban innovation hub.

“The challenge many entrepreneurs face is how to effectively ‘tell the story’ of their technology’s value proposition to their target audience—for example, how it increases efficiencies, saves money, or enhances measureable outcomes that mean something to the buyer. Focussing on product features does not necessarily demonstrate value in business terms.”

Working with the TCS can be like having a road map—or even better: a global positioning system (GPS), guiding companies through some business challenges. While some entrepreneurs may go straight to the TCS in one of more than 160 offices around the world, fuelling up at one of the regional offices across Canada can make the journey go more smoothly. The TCS has regional offices in Vancouver, Calgary, Toronto, Montreal and Halifax, and several satellite offices.

“Being ready to go international usually means having a prototype with demonstrated traction, and a business plan that identifies target markets and customers. An understanding of the competition, and how their solution is different or better, also helps,” says Drisdelle. Support is available from other sources—such as Regional Innovation Centres and incubators—to help entrepreneurs with the early stages of getting an idea off the ground, including putting together a business plan, getting seed funding, getting a patent, creating a company and “getting an idea out of the laboratory,” she adds.

In preparing for international markets businesses need to hone in on their market access strategy and on how their value proposition will resonate in a foreign market. “They need to be able to clearly articulate their value proposition,” Drisdelle says. “A company may want to go into seven markets right away but if they don’t have the capacity we help manage expectations and prioritize.”

Having data and statistics to show how a product or technology solution will fill a gap or unmet need will go a long way in selling it and raising capital to grow the company.

“Compared to more traditional business leaders, entrepreneurs tend to be risk-takers, and many ‘serial entrepreneurs’ thrive at the challenge of growing and scaling a new start-up that has high potential.”

Drisdelle says the steps for exporting technology and “ideas” are not that different from selling a more traditional consumer product. “You need to be willing to take advice and shift your business model.”

The TCS can help companies better understand a market—but companies have to be open to feedback. When a scientist or tech-savvy person refuses business advice it can be detrimental and the company may not survive, trade commissioners say. Not giving the right pitch can mean lost opportunities. It’s important to “work out the kinks” before getting in front of contacts and potential investor, trade commissioners say. Initiatives such as Canadian Technology Accelerators (CTA) can help by providing support such as mentoring.

“There’s no traditional sector now that doesn’t rely on technology,” says Alia Dedhar a trade commissioner who leads the innovation team in New York City which is also becoming  known as “Silicon Alley,” one of the “hot spots” for companies with high growth potential.

Dedhar’s team works with the regional offices to help a wide range of Canadian companies ensure they are market-ready. Most of her clients “already have some traction in Canada or elsewhere,” she adds. “They are looking for market support, strategic partners, client acquisition, and to access funding opportunities.”

There are “synergies” between New York and eastern Canada, and proximity helps make it an accessible market, Dedhar says. While venture capital funding is limited in the Canadian market, New York, which has long been known as the centre of finance, she adds, is experiencing a “shift from traditional finance to technology, with a lot more innovation coming and a lot more funding for innovation.” New York comes with many experienced venture capitalists, Dedhar says, many of whom are “entrepreneurs who have worked with start-ups before. They come with greater networks—not just the capital, but potential partners and contacts as well.”

Thierry Weissenburger, a trade commissioner heading the commercial program in Boston, says that while there are a lot of great ideas in Canada, there is not enough being done to take them to global markets.  He encourages entrepreneurs to “think big,” and seek out the business advice and resources necessary for growth.

“In Canada we punch above our weight in terms of scientific funding and publications but the same cannot be said of research to commercialization,” Weissenburger says, adding researchers are not necessarily entrepreneurs with business skills.

Typically a start-up is a small company with a great idea that began implementing the idea as a business concept, Weissenburger says, adding it is “rare” to innovate and remain independent. Researchers or inventors-turned entrepreneur can work on a start-up for years before the idea gets off the ground, then “someone comes along and offers you millions—a lot of entrepreneurs will ‘take the bait’.” His advice: “Don’t let go so quickly.”

“We don’t have enough entrepreneurs who think: ‘my intention is not to sell quickly—I want to build a global business’,” Weissenburger says, though he cautions there is a risk to waiting because in some cases an entrepreneur may pass on an offer then go bankrupt. The pay-off can be higher for those who can resist temptation and wait, he adds.

Vanessa Podgurny, a trade commissioner with Global Affairs Canada’s science, technology and innovation division, says Canadians are generally more “risk-averse” than their American counterparts, and that is reflected in a lack of willingness to “take a chance” on a great idea—including for venture capital funding.

“We have a legacy, yes— we’ve done some great stuff—but it’s really hard to grow an innovation company in Canada—outside of specific clusters, Podgurny says. “If you’re an innovator in a small market you could have the coolest product but if you don’t get the right people on your board of directors, and get the right funding, where is it going to go?”

Canadian entrepreneurs are often “shocked” by the pace at which their American contacts agree to something, Podgurny says. They might show a prototype to a contact and that company immediately wants to buy 500 units—but the start-up has only their prototype.

Global partnerships are becoming increasingly important and businesses have to be open to the idea that they may only have one part of the picture. Companies can help position themselves to take on global markets by expanding their networks, Podgurny says. This means identifying the capacities within their networks to be ready to meet manufacturing, testing, labelling, shipping and other requirements— “map it out.” Ensuring the TCS is part of that network is a “quick way for companies to bump up their market intelligence. Trade commissioners should be key people in your network,” she adds.