Putting CO2 Emissions to Good Use

Finding beneficial uses for materials that would otherwise have gone to waste or could even be harmful, such as CO2 emissions, is a virtuous goal in these results-driven and environmentally conscious times.

Carbon Upcycling Technologies (CUT) is a Calgary clean technologies (cleantech) start-up that is an offshoot of an oil-field service company. CUT has found the perfect example of such novel technology and innovative thinking: it converts CO2 emissions into nanoparticles that have a wide array of purposes, such as reinforcing concrete, increasing the strength of plastics, manufacturing high-performance electronics and producing more efficient solar cells. 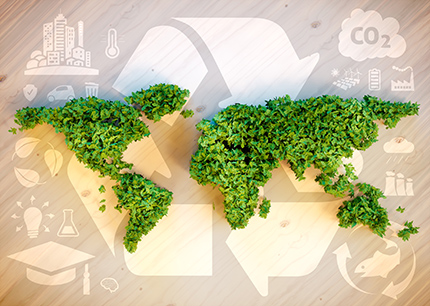 “We’re making a solid product from a pollutant, CO2, to create materials that will make us more sustainable as a society,” says Apoorv Sinha, who is CEO and founder of CUT and research manager of zEroCor Technologies, its parent company. With the assistance of the Canadian Trade Commissioner Service (TCS), CUT has entered into a contract with a Denver, Colorado company to use the substance to develop a corrosion-resistant coating for concrete tanks.

CUT was formed in August 2014 as part of a competition staged by Emissions Reduction Alberta. The competition, known as the Grand Challenge, has participants convert CO2 emissions into new carbon-based products. Sinha, a chemical engineer, says the company has found partners in academia and industry to move its innovative coatings and additives forward.

“We’ve really sought out whatever opportunities came our way, including reaching out internationally,” he says, noting that CUT has made inroads across the United States and in Europe, Algeria and Kuwait. During an annual oil and gas Conference in Denver in 2014, Sinha met representatives of the TCS, who invited the company to participate in Denver’s Canadian Technology Accelerator (CTA) in 2015.

Stephen Davis, a trade commissioner in Denver who covers cleantech, says the CTA offers a “unique and valuable set of resources” for Canadian small and medium-sized enterprises (SMEs) in the sector. It is built around the National Renewable Energy Laboratory (NREL), a one-of-a-kind global energy resource in Golden, Colorado, the only U.S. federal laboratory dedicated to researching and developing renewable energy and commercializing related technologies.

The accelerator program helped CUT define the markets best suited to their products in the Denver area, Davis says. As a part of the program, CUT was introduced to potential strategic local partners. One of these was Oldcastle Precast Inc., a manufacturer of precast concrete, polymer concrete and plastic products. CUT representatives visited the company in November 2015. In June 2016 the two firms signed a contract for CUT to develop a corrosion-resistant coating for some of Oldcastle’s concrete tanks. These are designed to hold oil and gas, which can eat away at the concrete over time, but with the coating they can last two to three times longer.

Davis says cleantech continues to gain momentum as an industry in both Canada and the U.S., and has become a “cross-over” sector. “Companies that have traditionally worked in other sectors such as oil and gas are using their technologies and services for the cleantech sector, and vice-versa,” he explains.

“Technologies that create a cleaner, more efficient way of doing a traditional operation are increasingly sought after,” adds Stan Pence, a trade commissioner in Denver who specializes in the oil and gas industry. “It is not just about solar, wind and hydro anymore; traditional energies are looking at innovative ways to become cleaner.”

CUT is a good example of a company that has product applications that cover several markets, Pence says. “CUT is a shining star of Alberta’s innovation ecosystem. It is constantly coming up with ground-breaking technologies that can improve the ‘clean’ footprint of the oil and gas industry.” The company has won several grants and awards, “and is extremely well-known in the industry.”

CUT, Pence observes, is continuously looking at new, innovative ways to improve existing operations. “Their strategies can be summarized by saying: ‘How can we make this better, cleaner and more efficient?’ Constant innovation to fill a direct need of the industry, while helping the environment, is CUT’s recipe for success.”

CUT looks for innovation in academia and brings it to the industry,” Sinha says, noting that there is often a “rough” interface between the two.

“Academia doesn’t appreciate the full magnitude of the challenges that industry has, while industry doesn’t understand the various things that are necessary to make technology work,” he remarks. “The interaction doesn’t move forward.”

Going abroad also means finding bigger markets and greater diversity in thinking than in Canada. “It makes a lot of sense for us to look into bigger waters, because the problems are more diverse elsewhere and the returns are much higher,” he explains. “We’ve seen more progressive behaviour and a higher inclination to try out new processes in the U.S. and Europe than in Alberta.”

Oldcastle Precast, a huge company headquartered in Littleton, Colorado, with 55 locations across the U.S., promises to be an important client for CUT. Each year, it makes 4,000 concrete tanks, which are used for oils and grease in the food industry.

“Denver is an exciting place to do business,” Sinha says. “I believe the inroads we have made and success at initiating projects is directly attributable to the effort the TCS made to reach out to industry and academia and make connections for us,” he remarks, crediting the TCS with generating leads for his company. “There’s nothing that’s been as useful as the trade commissioners. They’ve been pitching for us within their network. It gets us all these leads that we wouldn’t have known about.”

One such opportunity is with Eurovia, a massive asphalt producer based in France, which has 400 plants and produces $40-billion worth of asphalt a year, Sinha says. It has a contract to work on the new ring road around Regina and is looking at using CUT’s carbon additive to improve the durability of the road surface in freezing conditions.

Sinha sees many possibilities for the concrete coating and the asphalt additive, especially through exporting, which is a “pleasant surprise” given that the company is less than three years old. “If we get those two product lines going, it would be huge.”

Future focuses for the company include China, France and Mexico. Challenges, meanwhile, include the need to massively scale-up, to prove the effectiveness of its product and to tell its story—and the TCS is helping with that, Sinha says.

His advice to others like himself seeking to break in to international markets with an innovative idea:  have an “economic case laid out with a lot of detail,” and to do the necessary research to show why others should invest in it, backed by solid facts and numbers.

The technology accelerator program goes a long way in helping companies prepare for international markets, Davis says, adding the CTA helps trade commissioners better understand client needs and abilities and to match those to local resources and the local market. “We encourage more Canadian companies to look into this program, as well as to the wide array of support provided by the Canadian Trade Commissioner Service.”

For companies that participate in the CTA, it’s critical to hit the ground running, he advises. “These programs require a significant investment in time and motivation for Canadian clients, if they want to maximize their experience and their return on investment,” he says. “It is time well-spent. All our alumni see their company kick-started by new knowledge and strategic contacts, and several have enjoyed direct contracts resulting from the program.”