A new partnership of some 50 incubators, accelerators, universities, investors and industry associations throughout British Columbia, Washington State and Oregon will support entrepreneurs, innovators and researchers across the Pacific Northwest region known as Cascadia.

Called the Cascadia Venture Acceleration Network, (CVAN), the organization was established in December 2017 through an initiative led by the Canadian Trade Commissioner Service (TCS) in Seattle. The group acts as a springboard to launch new strategic, regionally focused efforts targeted at entrepreneurs, innovators and academic researchers there. 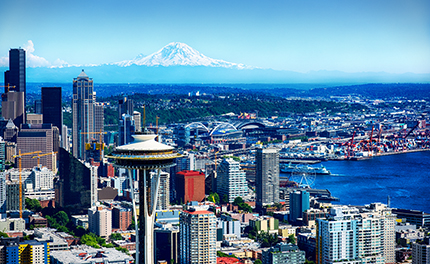 “This partnership brings together key elements of the Cascadia region’s innovation ecosystem,” says Lewis Coughlin, a trade commissioner and the innovation and investment officer at the Canadian Consulate General in Seattle.

Coughlin conceived and headed‑up the one‑year intensive project to establish what he calls the “mega innovation partnership” of organizations recruited from across the three jurisdictions. “This will help entrepreneurs, start‑ups and researchers here that need support to commercialize, scale up and prosper at the international level,” He says.

CVAN will initially focus on life sciences, information and communications technologies (ICT) and clean‑technology industries, then expand to other sectors in the future. This initiative was undertaken in the spirit of the innovation partnership that was formed in September 2016, when B.C. and Washington State entered into an agreement calling for increased collaboration in a zone known as the Cascadia Innovation Corridor. A memorandum of understanding establishing CVAN was signed in Seattle in December 2017.

Coughlin says TCS clients that will benefit from the CVAN partnership include Canadian start‑ups, primarily in B.C., at all stages of development. These can be organizations that need access to market‑ and sector‑specific information or researchers with which to collaborate on product development and validation. Others may be looking for venture capital investment, international business development events or cross‑border “soft‑landings” and can benefit from spending time in incubators and accelerators from other jurisdictions.

Coughlin says it makes sense to form such alliances in Cascadia, a geographic region bounded by the Pacific Ocean to the west and the Cascade mountain range on the east, encompassing much of B.C. as well as Washington and Oregon. CVAN’s activities and initiatives will benefit companies on both sides of the border. For example, the B.C. TECH Association and entrepreneurship@UBC  will offer “soft‑landing” space to select companies from Washington and Oregon, while New Ventures B.C. and CVAN investment partners will run a Cascadia Venture Pitch Competition open to early‑stage tech ventures across the region.

The anticipated results of the partnership include the fact that more TCS innovation business clients and academic researchers will establish meaningful business or academic partnerships with counterparts in Washington and Oregon, Coughlin says. They will also participate in mentoring and acceleration programs in Washington and Oregon through CVAN members. Additionally, the goal is for more United States Pacific Northwest venture capital (VC) investment to flow to Canadian start-ups and for more TCS companies—especially those in the early‑stages—to export to the region, he says.

Dr. Samudra Dissanayake, director of business development and strategic initiatives at Innovation Boulevard, a B.C. health technology accelerator that is part of CVAN, says the partnership will be “hugely valuable” to innovators in Canada looking for connections and capital to commercialize their products in the U.S. “There’s lots happening down there,” she says.

Dissanayake, who is on CVAN’s interim executive steering committee, hopes that through the network, at least one Canadian start‑up per month will get access to a business technology incubator or accelerator in Washington or Oregon in order to enhance its investment and commercialization prospects.

“We do very well when it comes to innovation and the research and development piece—including support from the federal and provincial governments,” she says, but commercializing the resulting products requires significant private investment. Through CVAN, she expects that cross‑border VC and angel deals will be made possible for Canadian firms, allowing for the rapid advancement and commercialization of their innovative technologies and/or products.

“It’s important to go beyond the press releases” and deliver results, Dissanayake adds. “We are talking about inventing technologies that will solve real‑world problems.”

Abhijit Banerjee, senior director of business development at the Oregon Health & Science University in Portland, Ore., a leading medical school in the U.S. that is part of CVAN, says that “tangible partnerships” bring important interactions rather than simply raising money for start‑ups.

“When we talk about an entrepreneurial ecosystem, it doesn’t come from the air, people have to make it happen,” says Banerjee, who is involved in academic‑industry partnerships and start‑up companies at his institution, which he says especially comes through developing academic and regional affiliations. Coughlin and the TCS were instrumental in taking the lead on setting up CVAN, he says, and pulling together its different partners in Canada and the U.S.

“Cross-border exchange is so important for the economy on both sides. It’s people‑to‑people interaction; that’s how business actually happens,” Banerjee says, noting that Oregon, Washington and B.C. together have better “bandwidth” to compete with California, for example. “If we come together as a region, we can be a force.”

Cascadia: a burgeoning centre of entrepreneurship

Sean Lumb, director of life science ventures for a venture accelerator at the University of British Columbia called entrepreneurship@UBC, says the organization is interested in “breaking down barriers” and collaborating on common goals through CVAN.

“It’s important to build relationships and capitalize on what each individual organization or ecosystem has to offer the others,” he says. “The business that we’re in is difficult enough; being able to aggregate scarce resources makes so much sense.”

Lumb says the Cascadia corridor is a “real burgeoning centre of entrepreneurship,” with roots in fields from software to aerospace, although it’s not as well‑known as traditional centres such as Boston and San Francisco. He says Coughlin’s work in starting the CVAN network and bringing it to fruition was critical.

“As word of it grew and got around, the membership exploded,” he says, noting that the partnership’s first year of operation will be important. Its activities will include information sharing, setting out strategic goals and activities as well as demonstrating results.

“This is where the rubber really hits the road,” Lumb adds. “Good things come out of people working together rather than being embedded in their silos.”

A wealth of opportunity

Coughlin says there is a lot of opportunity for Canadian companies in the U.S. Pacific Northwest, which includes Washington, Idaho, Oregon and Alaska. It represents 25 percent of the country’s total land area, with 13.5 million consumers and a GDP of more than one trillion dollars (US$790 billion). Canada’s annual two‑way trade with the region in 2016 was more than $44 billion, of which 58 percent was exports from Canada to the four states.

The Pacific Northwest leads the U.S. in climate change and clean technology policy and program development, involving cross‑border cooperation with Canadian provinces. Among the region’s promising elements, Seattle has vibrant ICT, life sciences and aerospace sectors and is home to some large private family venture capital and philanthropic charitable foundations.

He says there are some “mega business opportunities” for Canadian exporters and investors in the U.S. Pacific Northwest, given its “friendly business environment, which shares a lot of commonalities with Canada.” These include its transportation and logistics, its ties to the Asia‑Pacific region, its tech‑talented and highly educated workforce, its leading universities and its “sizeable” venture capital pool.

Help from the TCS

Canadian companies operating in or with the region should get to know the TCS representatives there to explain their export/investment plans and priorities and to solicit help as needed, he says.

“Visit the market and meet with prospective business partners and clients, ideally several times in a year,” Coughlin suggests. “Small companies should seek partnerships and a local presence within the U.S. from which to do business. Do your own research on the market and ensure you have the commitment to pursue the market by your management and that the required human and financial resources are allocated to pursuing expansion into the territory.”

From Seattle, United States, this story is one example of how trade commissioners located in more than 160 cities around the world help Canadian companies succeed.