Persistence and a long-term strategy have paid off for a Canadian space and defence company, which has won a $15 million contract to build a new system for NATO’s maritime command and control operations.

MDA signed a deal with NATO in December 2017 to support the military alliance’s Project TRITON. The contract comes with the prospect of significant follow-on opportunities at NATO and many of its member countries, proving the value of perseverance in pursuing work with the organization. 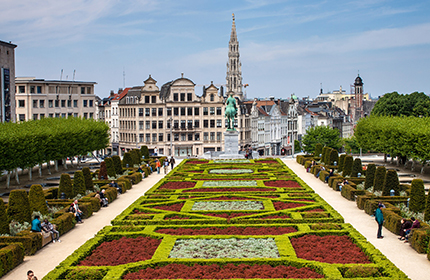 “It’s a long game,” says Mike Greenley, group president of MDA president of MDA, part of Maxar Technologies, a public company listed in Canada and the United States, formerly known as MacDonald, Dettwiler and Associates. MDA first became interested in the TRITON contract almost a decade ago, when it heard that NATO had plans to replace and update the command and control, or C2, system in its maritime operations centres, he says. “It’s a big effort. We had a team working on this project for several years.”

MDA, which was founded in 1969 and today has 1,900 employees in several centres across Canada, is best known for innovations in space robotics, such as the development of the Canadarm. It is also involved in satellite antennas, surveillance and intelligence, defense and maritime systems and geospatial radar imagery.

NATO—which stands for North Atlantic Treaty Organization—is a military defence alliance signed in Washington D.C. in 1949, by several North American and European nations in the North Atlantic area. Canada is a founding member of NATO, which is headquartered in Brussels.

Greenley says the three-year Project TRITON contract—which is under the NATO Communications and Information Agency (NCIA) in Brussels—uses MDA’s core expertise in maritime domain awareness and digital mapping to present a “maritime picture” that locates, tracks and analyzes the movements of ships at sea. This helps NATO and its member counties improve their situational awareness and decision-making processes.

It was critical for NATO to recognize MDA’s capabilities in the field, he notes, but the company also had to “stick with it” over a long time to be successful in its bid.

“This is a demonstration that a Canadian firm can compete in full and open competition and win a NATO program,” Greenley comments, noting that European firms especially find it more convenient to compete at NATO than those overseas. “There’s not a lot of history of Canadian companies being successful there.”

NCIA general manager Kevin Scheid said in a statement that “NCIA is delighted to have an opportunity to work with a Canadian company that brings the depth and breadth of Canadian maritime command and control experience to NATO for the TRITON project.”

Kerry Buck, the Permanent Representative of Canada to NATO, noted, “NATO is at the core of Canada’s national security policy. We are proud that NATO will leverage Canadian technology and expertise to contribute to enhanced communications and support interoperability in NATO.”

Lieutenant-Colonel Jim Bates, the former national expert, or NATEX, for Canada at NCIA, says that “MDA did everything right to win the TRITON contract.” Bates, who returned to Ottawa in 2017 to take up an assignment at National Defence Headquarters, calls it “an excellent case study” for Canadian firms interested in getting work at NATO.

Bates first became aware of MDA’s interest in the TRITON contract when he first started at NATO in 2012. “MDA had been tracking that project from the earliest days,” he recalls. “MDA made regular visits to NATO to meet with key stakeholders. It pursued and won other smaller NATO contract opportunities prior to the TRITON award, so it had a foot in the door and was able to introduce NATO personnel to MDA’s services and expertise. That made a positive impression.”

The company kept in regular contact with Bates to get business intelligence, and it attended each annual NCIA Industry Conference, where MDA officials could engage agency staff and completely understand NATO’s procurement process.

“There were no surprises when it came time to bid,” says Bates, adding that is not always the case. “Companies big and small agonize over whether to bid,” because it’s a substantial commitment with no guarantee. “It was the norm during my time at NATO that Canadian companies would track NATO opportunities but rarely bid. But you can’t win if you don’t bid…MDA was confident in its position on TRITON and it won.”

Greenley says that in dealing with NATO and its member countries, it’s important to present the right price as well as the right technical solution. “In NATO you have to get the entire team comfortable with your approach.”

Future contracts related to the TRITON deal could “highly likely” include adding functions and features to NATO’s C2 systems, he says, while NATO member countries could adopt MDA’s TRITON solution for their own maritime operation centres.

“There’s every reason to expect there will be solid follow-on business,” Greenley says. “This could easily become a persistent work story in our company for a decade or more.”

He credits the Canadian representatives in Brussels at all different levels of Canada’s mission to NATO, as well as in key NATO member countries, with MDA’s success in winning the contract. “All the right people in the right places at the right time worked with us to win this opportunity.”

MDA exports regularly and has started to become operationally present in other countries, Greenley says. Its business development activities are supported by the Canadian Trade Commissioner Service (TCS), along with Export Development Canada and the Canadian Commercial Corporation.

“We use the full suite of export tools available to Canadians,” Greenley comments. “International business is based on having a good solution, it’s based on having your country as a buyer and then you need whole-of-government support.”

MDA will be using the Canadian Trade Commissioner Service (TCS) to promote its TRITON technology among NATO members looking to replace and update their own C2 systems, Greenley says. “We will certainly be out there working in NATO countries with the TCS encouraging those countries to adopt this solution.”

Gregory Rust, the senior trade commissioner who is head of the trade program at Canada’s embassy in Brussels, says “one thing that I’ve observed following the NATO contracting process over the years is that it’s important to be persistent, patient and thorough.”

Rust says MDA displayed all of those critical characteristics, and the TCS “was available to support the company’s ongoing interests by offering key core services.”

Jane Li, First Secretary in the Joint Delegation of Canada to NATO, who is Canada’s representative on the Investment Committee that oversees the NATO Security Investment Program, says it’s important to be proactive in researching and understanding NATO’s needs.

“Patience is also a virtue,” she says, adding that as with many large organizations, it takes time to get to know NATO and how it functions, and for the organization to understand what industry has to offer. “Taking a long-term view is necessary.”

MDA took such an approach “and spent a lot of time working towards this,” she says, adding that it’s important to “respond to opportunities early and often. Tracking and signalling interest to receive invitations for bids will help you understand what NATO needs and improves familiarity with its processes, which in turn can help increase your chances of success.”

Greenley says now that MDA has the TRITON contract, “we want to have sustained business relationships with NATO,” but it’s still not going to be easy to get contracts there.

“It takes a long time for any NATO program to be organized and executed, so to stick with it is challenging,” he says, while the distance to Brussels and the extra investment needed to have a presence there is an added hurdle for Canadian firms.

Canada is joining other countries in having governments and companies form partnerships to lobby for NATO work, which makes sense given the revenues that NATO contracts can bring, he says. “We’re starting to step up and ensure that we get our fair share.”

Greenley advises companies interested in NATO work to beware of how long the process can take. “I would not put a NATO project in my core business plan,” he says. “You shouldn’t assume it’s going to happen. It’s a strategic, incremental business growth opportunity.”

He says it’s important to stay “fully engaged” with the TCS and work with Canada’s delegation to NATO as well as member countries. “NATO by its definition is based on the participation and collaboration of many participants,” he explains. “You need to use Canada’s relationships with multiple NATO countries to build a base of support for your solution.”

Greeley hopes MDA’s success “leads to other companies in Canada seeing it can be done, and adding to the list of Canadian-based NATO programs.” As the company now executes the TRITON contact, “we’re going to work hard to make the most of this opportunity,” he adds.

From Brussels, Belgium, this story is one example of how trade commissioners located in more than 160 cities around the world help Canadian companies succeed.