The Canadian mining industry can be very conservative when it comes to new technology and very few are early adopters but fortunately for a Vancouver, B.C., company, global partners were keen to latch on. 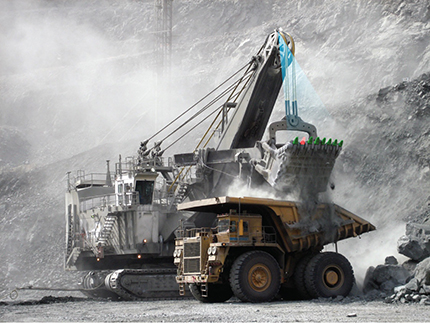 While many mining companies might talk about innovation, most are cautious, and likely to wait until a new technology has already been deployed by someone else before they will seriously examine it, says Nicole Van Hove of the Canadian Trade Commissioner Service (TCS).

“It is usually a challenge to get a company to be the first adopter of a new technology. Once you get over that hurdle, everybody wants to be the second or third, but few want to be first in case something goes wrong,” says Van Hove, who covers mining and oil and gas for British Columbia and the Yukon.

Fortunately for Motion Metrics, many global partners are keen to embrace the Canadian company’s technology if it will bring better safety and efficiency. The firm has built‑up a successful array of digital‑analysis and sensing technology, and they’ve done it almost entirely by exporting abroad, where the early adopters are easier to find.

“We’re one of the only companies that apply advanced distributed AI for camera and sensor‑based monitoring of equipment and rock sizes in mining. We want to leverage that and expand our offerings to other areas,” Tafazoli says. “The goal is to grow Motion Metrics much bigger.”

Tafazoli started Motion Metrics in 1999, two years after he received a PhD in robotics from the University of British Columbia, where he conceived the early technology and product idea the firm has commercialized over the years. In 2004, the company started exporting its innovative products, and Tafazoli continues to try to capitalize on emerging technology.

Motion Metrics biggest success has come by way of saving lives. Its ShovelMetrics™ and LoaderMetrics™ technologies analyze conditions of the mining equipment and the contents coming out of the mine and generate a warning if something goes wrong that can harm other workers in the mine.

Tooth breakage, for example, is a serious problem that can maim or kill other workers if such hard metal pieces (commonly referred to as Ground Engaging Tools or GET) end up in the crusher. Motion Metrics systems are designed to monitor those issues by applying embedded and cloud‑based AI to camera images.

“An engineer from Syncrude (an Alberta oil‑sands processor) Research told me about the problem back in 1998,” says Tafazoli. “I started a project with a camera‑based system. Ever since it has evolved with technology and has been made better and better to reduce false alarms.”

Motion Metrics has since expanded into analyzing rock sizes (commonly referred to as rock fragmentation) using a handheld device, inside the shovel buckets or on top of conveyor belts. “Comminution, which is the action of reducing rock sizes in mining, can be a very expensive problem if not optimized. By sensing rock fragmentation, one can optimize blast parameters and therefore reducing crushing energy that means saving millions of dollars,” he says.

Motion Metrics’ first international sale was to a diamond mine in Botswana. Since then, the company has grown to 60 full‑time employees, mostly in Vancouver but with offices in Chile, South Africa and soon, Australia. About 95 percent of its revenue comes from abroad, about $10.3 million in 2017, and Tafazoli claims his firm’s sales are growing by 30 percent a year. His track record and ongoing success made Motion Metrics a finalist for B.C. Exporter of the Year.

Tafazoli had gone out on his own to sign export deals in the company’s early days and did not start really utilizing the TCS until 2008. The TCS has since been instrumental in opening doors for Motion Metrics’ ever‑expanding catalogue of products, he says.

“Back then I was new in the business environment as my background was primarily technical” Tafazoli recalls. “Trade commissioners start you off with high‑level contacts. Canada is very well‑received in that sense, and that facilitates getting new deals happening. You have these (TCS) experts who are familiar with the particular market in that particular geographic area. They can help you connect with the right people. They can help you connect to local tech agencies. There are events where they bring high‑level people from the mining industry and provide you with a pleasant setting for networking.”

Several TCS services have been useful to Motion Metrics in various markets include market research, due diligence on potential clients, expanding offices, recommending banks, lawyers and professional services, and general trouble shooting such as looking into distribution and delivery delays, Tafaxolio says.

Van Hove has worked with Motion Metrics for the last 18 months, while the company was on its way to deploy AI algorithms to its product line. She says it’s unusual for a Canadian company servicing in the mining industry to be getting that much of their revenue from exports.

“They have a suite of products that possess a great competitive advantage in terms of making mining a lot safer for the people doing it and improving efficiency,” Van Hove says. “When you look at the number of countries and the number of mines, it’s pretty impressive. They’re not just in Chile, but Latin America, all over South America, Australia, Mexico, and Africa. To see someone take something from an academic setting to commercial success internationally is very exciting.”

Van Hove adds that mining technology firms tend to become more interested in exporting when there is a downturn in the Canadian sector—but if commodity prices are high, they will focus on the domestic market.

It makes more sense to have an aggressive export strategy always in play, and Canadian firms are always at an advantage around the world in mining, she adds.

“In Canada, we’re known for having decent mining protections for workers and environmental remediation versus a lot of other countries,” Van Hove says. “I think that helps a lot of Canadian exporters that have a solution and they want to take that same reputation for safety and quality and apply it somewhere else.”

Many other leading mining jurisdictions are importing Canadian expertise, she adds. Chile, for example, is expected to spend $8 billion on mining this year, with about 80 percent of that on goods and services coming from outside the country, including from Canada.