Sales of Canadian goods and services by foreign affiliates in global markets have recently exceeded direct exporting and the trend is likely to continue as the economy shifts towards services and market diversification. 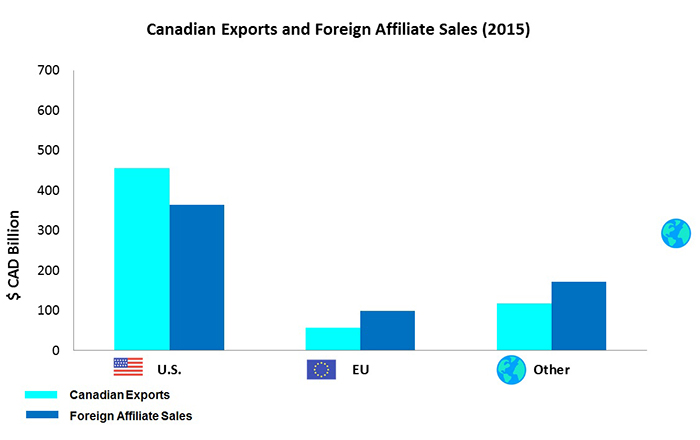 Statistics for 2015—the latest available data—shows sales by foreign affiliates’ exceeded exports of goods and services for the first time that year, totaling $634 billion, $5 billion larger than exports. Foreign affiliates are majority foreign-owned companies operating in a market with ties to a source or parent company in the country of origin. Canada’s foreign affiliates operating in the United States accounted for 57.3 percent of all sales, compared to 15.6 percent in the European Union (EU), and 27.1 percent in other countries.

Sales growth was particularly strong in Sweden where there was a 400.0 percent increase since 2011, and in and Germany with an increase of 44.3 percent.

Canadian direct investment abroad is an important means to reach distant markets, especially for services. Many countries even require Canadian companies to have an affiliate in their country before services can be provided there.

Sales by foreign affiliates now exceed exports and will likely continue to grow at a fast pace as the economy shifts to become more service-driven and Canadian companies continue to diversify their export markets. As newer trade agreements such as the Canada‑European Union (EU) Comprehensive Economic and Trade Agreement (CETA) and the Comprehensive and Progressive Agreement for Trans‑Pacific Partnership (CPTPP) gain momentum, Canadian companies will likely continue to access new markets thus further diversifying their trade interests and contributing to the growth of sales by foreign affiliates.

This article was submitted by the Office of the Chief Economist.