If you’re asked to name some of Canada’s top exports, you might suggest natural resources, manufactured goods or those maple syrup-laced treats that are iconic around the world.

But try taking an educated guess. 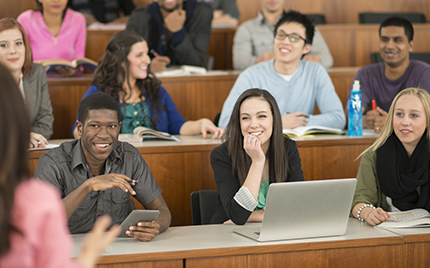 Exports of Canadian education, with international students studying in educational institutions all across the country, represent a major part of Canada’s market abroad and contribute significantly to Canada’s economy, according to a recent report. With the assistance of the Canadian Trade Commissioner Service (TCS), such exports as well as lucrative sales and licensing of Canadian education services offered by Canada’s educational institutions around the world are very much on the rise.

“Canada has an excellent reputation for education,” says Andreas Weichert, a trade commissioner and former director of the international education and tourism division of Global Affairs Canada. Education is a key export service sector for Canada, he notes, and Canada ranks eighth in the world as an education destination.

“There has been a huge upswing in the number of international students coming to learn in Canada and being trained abroad through commercial agreements and contracts with Canadian institutions.”

International students in Canada are spending more money than ever here, according to the two-year study done for Global Affairs Canada by Roslyn Kunin & Associates Inc., released in December 2017. The study, which updates a report done twice before, this time includes validation by Statistics Canada, examines the impact that international students in Canada in 2015 and 2016 had on the economy.

The expenditures of international students, including their visiting families and friends, were $12.8 billion in 2015 and $15.5 billion in 2016, the study found, and they contributed $10.5 billion and $12.8 billion to our GDP in 2015 and 2016, respectively. Between the two years, the international student population in Canada grew by about 18 percent, with most of that growth related to students who are here long-term.

There is a significant positive value associated with international students studying in Canada, according to a study conducted in 2015 and 2016 by Roslyn Kunin and Associates for Global Affairs Canada. The report, released in December 2017, focuses on the direct and indirect impacts of such spending. Among its findings:

“The numbers continue to rise,” says Weichert, pointing out that education is considered a “service export,” much like tourism. As well as students coming to Canada, our post-secondary institutions are finding commercial opportunities around the world, from colleges and universities setting up campuses abroad to the sale of systems and expertise and leasing of curriculum.

Commercial opportunities are not strictly educational exchanges, because they involve funds changing hands, he notes. Canadian expertise in the education sector extends to the energy sector, forestry, mining and aerospace as well as language and teacher education, he says. “We have a wealth of experience in these areas and we can train others in them.”

Canada has especially benefited from the fact that countries such as Australia have tightened their rules for international education, while uncertainty in countries like the United States and the United Kingdom are “making Canada a more attractive option,” he notes. “The stars are aligning.”

Britta Baron, former vice-provost and associate vice-president for international studies at the University of Alberta in Edmonton, says that “international student recruitment is the name of the game” for Canadian colleges and universities because it brings revenues, provides recognition and visibility as well as “creating a totally global environment” within the institutions. “That’s a huge learning experience in itself.”

Baron, who is originally from Germany, says that U of A is among the most “internationalized” universities in Canada and ranks 40th in the world. That’s because its leadership is committed to using global ties to promote the university’s brand, she says. “It’s about reputation building.”

For U of A and other Canadian institutions looking for international markets, “now, the actual delivery of courses is, indeed, more often moving abroad,” she says. For example, her university has established a relationship with Mexico’s ministry of energy, valued at approximately $14 million, with the help of the TCS, to offer training there as Mexico overhauls its energy industry from a state-run to a more private system.

“They need better technology and know-how as well as better-trained people,” Baron says. “Our Mexico collaboration addresses both.” U of A is helping the National Autonomous University of Mexico build its training capacity in geosciences, geophysics and geo-statistics, for instance, and has involved partners in Alberta in the effort.

The TCS “has been key” in forming relationships in Mexico, she remarks. “Without their support and networks, we wouldn’t be able to do what we’re doing…We’re constantly looking for new opportunities.” The TCS has also been helpful in areas such as risk management, helping U of A ascertain the integrity of potential partners and establishing the university’s credibility at the same time, Baron says. “It’s door-opening for us.”

The university is also working extensively with educators in China, which already accounts for 10 percent of U of A’s student population, to develop research collaborations, partnerships and joint projects to help that country modernize its institutional culture.

Weichert says that U of A is “doing all the right things” to attract international students and other commercial opportunities. “It’s a shining example,” he comments, noting that Canadian post-secondary institutions especially can offer other countries expertise on setting up and modernizing their colleges and universities. “We’re just scratching the surface.”

One big advantage of students from abroad studying in Canada or receiving Canadian training is that they can graduate with Canadian credentials and can end up working in companies here, becoming a diverse group of new residents who support Canada’s global integration. “That’s huge,” Weichert says, while those that return to or remain in their home countries will always have a connection to Canada. “We can’t measure the economic benefit of that.”

He says that “the number of export opportunities continues to grow” in the education sector, although “there’s much more to be done in terms of getting the word out.”

Baron says there is significant competition for international students and contract training from countries such as Japan, Turkey and Russia. Meanwhile it’s challenging for Canadian educators to “understand the real opportunities” and scale up their initiatives. She’d like to see better collaboration among different colleges and universities in Canada, with coordination by the TCS, rather than everyone vying for the same international opportunities.

“We could benefit from our synergies, work with each other and share resources,” she says. “We could do better if we joined forces. The competition should be with institutions in other countries.”

She recommends that universities and colleges focus on their teamwork, for example U of A has 60 full-time staff in its international division who mesh in terms of their expertise, languages and intercultural skills.

“It’s very much a contact sport and all about human relationships,” Baron comments, adding that success will mean more jobs for Canadians, as well as research and alumni links with other countries. “This is good news for the university—and for society.”