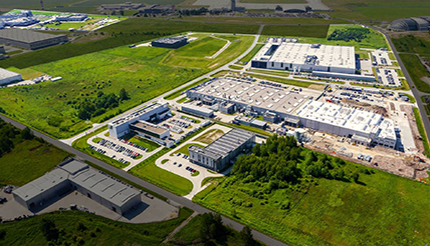 Establishing a presence abroad is no small matter for a small business in Canada, requiring the kind of resources, time and energy that make the company expect some significant returns. When Nétur Inc., an aircraft parts manufacturer in Saint‑Hubert, QC, opened a customer service, design and engineering office in Poland in 2017, the decision wasn’t taken lightly.

With the assistance of the Canadian Trade Commissioner Service (TCS), Nétur Polska is up and running in Podkarpackie, an area in the southeastern part of the country known as the Aviation Valley. The company is even adding a manufacturing shop in Poland in the coming months, its first foray into making aircraft engine components outside of Canada.

“I don’t think we would have made these moves if we hadn’t talked to the TCS,” says Stéphane Turcotte, president of Nétur, which was started by his father in 1978 as a machine shop in the community on the outskirts of Montreal. It grew significantly over time and came to focus exclusively on supplying high‑precision aircraft engine components for large, world-renowned aircraft engine manufacturers such as Pratt & Whitney Canada. Today the company has 56 employees, including four in Poland, with annual sales of US$12 million, split evenly between the Canadian and international markets, including US$1.5 million in revenues in Poland and growing.

This strong Canadian presence is reflected in healthy trade statistics: total aerospace exports to Poland in 2017 were more than $170 million, representing 25 percent of Canada’s exports to Poland. Canadian imports of aircraft engine components from Poland totalled about $358 million, representing 19 percent of Canadian imports from Poland.

Poland is the fourth‑largest exporter of aircraft parts to Canada after the United States, Germany and the United Kingdom, says Wysocki, who advises Canadian companies in the aerospace and automotive sectors “to look at Poland as a European country where the global supply chain in both sectors has established hubs.” He notes that the Canadian Trade Commissioner Service (TCS) helps Canadian companies identify business opportunities there and will facilitate introductions to key contacts locally.

Nicolas Lepage, the senior trade commissioner in Warsaw, says that Poland is the eighth‑largest economy in the European Union (EU), with a population of just over 38 million, the EU’s sixth-largest member, and it is the largest recipient of EU structural funding. It is Canada’s largest merchandise trading partner in Central and Eastern Europe, with bilateral trade increasing by more than 23 percent over the last two years. In 2017, bilateral merchandise trade reached a record level of more than $2.6 billion, with Canadian exports reaching close to $700 million and Polish imports reaching $1.9 billion.

The Organisation for Economic Co‑operation and Development (OECD)’s latest economic analysis projects that GDP growth in Poland will exceed four percent in 2018, as domestic demand accelerates and investment recovers. Poland has benefitted substantially from its integration into global value chains, Lepage says, with a government development plan that includes stimulating private research and development spending as well as improving university‑industry collaboration.

There are opportunities for Canadian firms large and small in a variety of sectors in Poland, he says, from aerospace and automotive to information and communication technologies, extractive industries, clean technologies, life sciences and agriculture and agri‑food.

“Innovation is a cross‑cutting theme,” Lepage says. “Given the strong interest for building linkages between our innovation ecosystems, specific initiatives are also focusing on this interest for increased innovation collaboration.”

The business and investment climate in Poland is good and has been improving, as a result of recent reforms, he says. “Canadian companies are not facing specific challenges, even if some companies active in the marketplace note there is still room for improvement, especially to speed up business transactions and improve governance in public procurement.”

Canada and Poland have friendly ties, Lepage adds. Canada became home to hundreds of thousands of Polish emigrants after the Second World War, who were instrumental in developing trade with Poland. The first major Canadian trade delegation went to Poland in 1999. Since then, bilateral trade has been growing year‑on‑year to its 2017 record level.

Turcotte first was encouraged in 2012 to locate in Poland, the third‑largest aerospace cluster in Europe, by customers looking to improve their supply chain there. He strongly considered it, but Nétur had been undergoing a major expansion of its facilities in Canada at the time, he recalls. “We put it on ice.”

His relationship with the TCS goes back to 2012, when Nétur was part of an aerospace trade mission to Poland led by the Government of Quebec. It was then that he first encountered Arkadiusz (Arek) Wysocki, the trade commissioner in Warsaw who covers the aerospace, automotive, mining and transportation .

Wysocki continued to support Nétur’s market entry in Poland and encouraged Turcotte to consider an actual Polish location for his business. In 2015, the trade commissioner brought the welcome news that a special business incubator was starting in Jasionka, near Rzeszow, the capital of the Podkarpackie region, which would lower the company’s risk and help it to learn about the market there. In late 2016, Turcotte decided to move ahead and start a regional office there. Nétur Polska started operation in August 2017, a move that Turcotte credits the TCS for making possible.

Wysocki notes that “Poland has become an important hub for aircraft engine manufacturing and maintenance, repair and overhaul operations, and it is really vital for Nétur to be close to its key clients.” He says the company “made the right first steps by starting its international business development with the TCS,” beginning with getting advice from the service’s Montreal regional office and joining the Quebec mission to Poland. Then Turcotte followed up with 16 visits to Poland, he notes.

“Nétur’s strategy was to follow its key client, Pratt & Whitney Canada, which was already well established in Poland,” Wysocki says. “Establishing Nétur Polska is the right way to gather and process business leads in the region, feeding the manufacturing facility in Canada with contracts.”

For small family businesses such as Nétur, “the support of the TCS is vital in remote markets like Poland,” Wysocki says. “The support continues along with the company growth, because the TCS is constantly developing its network of local contacts and generating new business leads.”

Turcotte says the TCS “really helped us a lot,” putting Nétur in touch with the right lawyers, accountants and other professionals to set up its operation, and helping it deal with issues such as understanding Poland’s different labour regulations.

Its staff there for now includes customer support, mechanical engineers and a quality engineer, who all deal with issues in Europe and expand Nétur’s functions in Canada. “It extends the time zones; it’s like we have a night shift,” Turcotte says, noting that the new production floor in Poland will help the company do jobs for customers in the region.

Having the remote facility is especially doable for the small company with today’s technologies such as video conferencing and of course the internet, which allows Nétur to instantly see the efficiency of each machine in Poland, for example. “It’s really plug and play for us,” Turcotte allows. “We don’t need to build a big infrastructure. I’m not sure that it would have been as possible to manage 10 years ago.”

Poland is a good hub for companies such as his, Turcotte says, with a highly educated workforce, a good deal of English spoken, reasonable prices for materials and labour and a strategic location amidst major European clients. He recommends that SMEs looking to locate abroad take their time and consider all the upsides and downsides.

“You need to be patient. You don’t take the decision with the flip of a coin,” he advises. “You need to see really long term what will happen in the future and whether it will pay off.”

Wysocki says the key challenge for Netur is its limited size, with Turcotte “trying to do everything by himself,” although having a team in the Polish office will allow the business to grow. “The TCS will continue to help by offering Nétur opportunities to participate in major trade events and by introducing it to new key contacts locally,” he adds.

Turcotte says that having the TCS connection is helpful. “When you’ve got your embassy with you, it’s definitely more powerful,” he says, noting that he continues to stay in touch with Wysocki. “He’s really watching out for us.”

Coming up to a year since Nétur established its office in Poland, “I don’t regret my move,” Turcotte says. “Now we just need to stay focused on the market,” he adds. Indeed, the company expects to pass US$5 million in sales in Poland by the end of 2019.

From Warsaw, Poland, this story is one example of how trade commissioners located in more than 160 cities around the world help Canadian companies succeed.