Canada’s WATERAX is putting out fires and seeking new opportunities in Europe. With forest fires on the rise, and the year‑old Comprehensive Economic and Trade Agreement (CETA) between Canada and the European Union eliminating 98% of tariffs, the company turned to the Canadian Trade Commissioner Service (TCS) for support to expand into new markets on the continent. 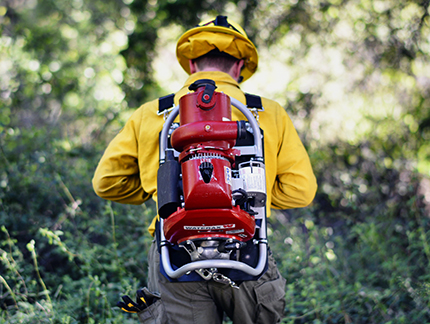 The Montreal-based company, which manufactures portable water pumps, was founded in 1898. However, it wasn’t until three EMBA students bought the company in 2010 and rebranded it as WATERAX that it began exporting its outdoor firefighting equipment abroad.

Forest fires have become an issue throughout Europe as temperatures rise. An intense heat wave swept the continent this past summer, triggering deadly fires. In Greece, a state of emergency was declared as forest fires killed 74 people and sent thousands running to escape flames. Sweden lost an estimated 25,000 hectares of forest due to fires, while in Finland, fires devastated forests in the Lapland province.

“What used to be an anomaly in the fire season is now the new normal. It’s no longer a fire season, it’s a fire year,” says Marcello Iacovella, Vice-President of Sales and Business Development, WATERAX.

Today, 25% of the company’s business comes from markets beyond Canada and the U.S.—with Latin America and Southeast Asia accounting for most foreign sales. WATERAX has its sights set on Europe for further growth.

“Demand has certainly spiked in the last few years,” says Iacovella. “But competition in Europe is ferocious. Sometimes we struggle to get attention.”

Fortunately, WATERAX has been able to lean on Canadian trade commissioners for support. Iacovella says the TCS has been instrumental in providing WATERAX with on‑the‑ground intelligence, as well as identifying potential partners and customers.

“The TCS helps identify who the players are in a given market. They do a lot of the vetting for us before we spend any money.” Iacovella says.

As a result, WATERAX has been able to sell its products to customers—primarily governments—in countries such as Italy, France, Sweden, Norway, Greece and Portugal. The combination of market intelligence and contacts has enabled WATERAX to raise its share of business in Europe to nearly 10% of global sales. Now, the TCS is assisting WATERAX as it pushes into Eastern European countries starting with Romania.

As the global market leader in portable water pumps for wildland firefighting, WATERAX will continue its push into Europe and many other markets abroad, working in conjunction with the TCS. “The service we get is second to none,” says Iacovella.