A Canadian company that uses big data, artificial intelligence and geographic information systems to track and predict the spread of infectious diseases around the world is looking to help governments as well as businesses and individuals respond to these public health threats.

BlueDot Inc., which was founded by Dr. Kamran Khan, a physician and scientist at Toronto’s St. Michael’s Hospital, has developed an infectious disease early-warning system. It can help public health agencies, airlines, insurance companies, hospitals, health-care workers and travellers to deal with the global spread of influenza and diseases such as Ebola and the Zika virus. 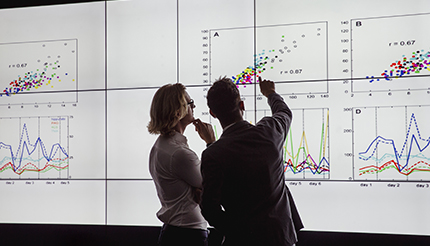 “We are using 21st century solutions to solve 21st century problems,” says Khan, the company’s CEO, who recently won the Governor General’s Innovation Award. With research interests that focus on human migration, international air travel and the globalization of newly emerging and re-emerging infectious diseases, he spent a decade studying global outbreaks following the deadly SARS epidemic in 2003 and started BlueDot in 2013. The company’s name was inspired by Carl Sagan’s description of Earth captured by the Voyager 1 space probe while it left the solar system.

Today BlueDot has 40 staff based at the Li Ka Shing Knowledge Institute—at St. Michael’s, who have developed a web-based platform that creates “situational awareness” of infectious disease threats around the world and how they can move through air travel. About 20 percent of the company’s market is in Canada, with the rest abroad, Khan says. “Our goal is to get our technologies and the insights they provide into the hands of as many people as possible.”

Working with Global Affairs Canada over the last four years under Canada's Weapons of Mass Destruction Threat Reduction Program, which supports the Global Partnership Against the Spread of Weapons and Materials of Mass Destruction, BlueDot formed a partnership with the 10 countries in the Association of Southeast Asian Nations (ASEAN) to improve their capacity to predict and respond to disease outbreaks.

Looking to improve the health of your company by expanding your leading technology into new markets abroad? The Canadian Trade Commissioner Service (TCS) can help you hone your message and find the right audience for it.

Daniele Haddad, a trade commissioner in Dubai who covers the ICT, life sciences and innovation sectors for the United Arab Emirates, assisted BlueDot Inc. in obtaining an overall sense of the UAE’s health-care sector, as well as the key health authorities and their priority areas of interest.

She also gave Matthew German of BlueDot additional context around the Canada-UAE relationship in the health sector. For example, the Government of Canada, through the Canadian Commercial Corporation, recently signed a memorandum of understanding for collaboration with the Dubai Health Authority (DHA), allowing for bilateral exchanges. “I believe this context was helpful to zero in on some of the opportunities that may be available currently. Indeed, following an introduction to the DHA, the team there was instantly receptive to having a conversation with Matthew andlearning about BlueDot's innovative technology,” she says.

Maude Kostine, a trade commissioner in Toronto in the life sciences sector, suggests that companies look for non-traditional partners and buyers in target countries. The TCS can tap into its broad network to identify multilateral partners that are interested in connecting with companies that have solutions to global problems, she says. “It is important to identify opportunities that advance Canada's global agenda and brand Canadian companies that have a truly global impact.”

Patience and persistence are critical for companies working in the sector, says Haddad, adding that the TCS can help to make important connections that move things along.

“It can often take time for clients on their own to identify where the right local channels might be in order to pursue an opportunity or to assess the viability of a given solution,” she says. “We can help bridge this gap by being on the ground with access to key intelligence and people.”

The company’s current focus is finding new foreign markets for its products with the assistance of the Canadian Trade Commissioner Service (TCS), beginning with targeting governments in busy travel and financial hubs that are more likely to encounter such threats.

Matthew German, program manager at BlueDot, says the idea is to “channel” its leading-edge technologies to different audiences such as public health agencies, the security sector and businesses.

He says the TCS was helpful in advising BlueDot to “keep the conversation focused,” refining its messaging and zeroing in on such specific audiences. “You need to reach out to the right people in the most timely way, with the most succinct product and message,” he says. “We’re bringing new technologies into the market, so this is a bit of a learning curve. This is where trade commissioners can be very helpful.”

The company’s BioDiaspora Explorer product is oriented to risk assessment, public health information and intelligence groups doing “horizon scanning”. It uses a digital tool that tracks outbreaks around the world, backed with data on how they are likely to spread. The company is in the early stages of its efforts in specific markets such as the United Arab Emirates, France and South Korea. “There is a lot of interest,” German says. “We are definitely pleased with the traction that we've had to date.”

Maude Kostine, a trade commissioner in Toronto who helps Canadian companies in the life sciences sector find markets abroad, says that BlueDot “seems to have a niche, a cross between security and health outcomes, and it is being strategic in selecting countries that are important travel hubs.” It also helps that BlueDot now has connections with major global players through its work in ASEAN, she remarks. “The company is well positioned to enter new markets on a bilateral and multilateral basis.”

Khan says that having the TCS involved means that connections are “curated” for BlueDot and potential customers. “It’s the difference between a cold call and a warm introduction. It does help,” he comments. “Having the weight of the Government of Canada behind you lends gravitas to the message.”

BlueDot has started working with businesses such as airlines to better prepare for infectious disease threats that can have economic consequences. Khan also wants his data to help individuals through digital technologies such as smartphone apps for travellers, so that they can make smarter decisions to protect themselves.

“We’re just scratching the surface,” says Khan, noting that population growth, climate change, urbanization and the boom in air travel make the technology all the more relevant and necessary. “There’s a huge unmet need and an unmet opportunity out there to create a healthier, safer and more prosperous world.”