The time for clean technologies has arrived.

As the world adapts to a more sustainable future, Canadian exports of clean technologies and applications have soared over the past five years and the world is taking notice. 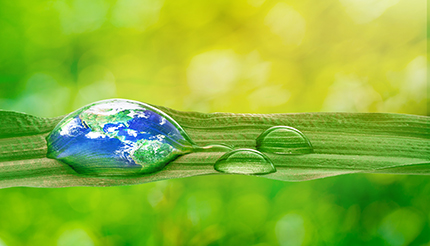 Several Canadian companies are now among the top global firms exporting clean technologies (cleantech) around the globe. Canadian cleantech exports continue to rise, and the country’s cleantech sector is rapidly expanding, bringing innovative new technologies to market at a brisk pace. Beginning in 2014, the Government of Canada has taken several steps to make it easier for Canada’s cleantech companies to export abroad. A government-wide strategy, partnerships and various programs and initiatives are helping position Canadian firms as global leadersin the fight against climate change and pollution.

Global Affairs Canada’s Canadian Trade Commissioner Service (TCS) has a significant role to play in helping Canadian companies get their cleantech products, applications and services to global markets. Trade commissioners in Canada and around the world are ready to help.

“Clearly the investments in the last four or five years are making an impact and we are seeing more and more cleantech companies going international,” says Yvonne Gruenthaler, a trade commissioner based in Calgary, Alta., who covers cleantech.

Between 2012 and 2016, Canadian cleantech exports increased by 22 percent, amounting to more than $11.5 billion in revenue and accounting for two percent of Canada’s total exports. As the world boosts its efforts to halt climate change and meet commitments set in the United Nation’s Paris Agreement on climate change, cleantech innovation and exports are poised to grow steadily over the next 20 years.

The demand is so great that the TCS has designated several trade commissioners in Canada and around the world to focus solely on recruiting and supporting capable cleantech firms to export. One of the challenges is the sector consists of many emerging cleantech firms that are often young and small—with fewer than 50 employees for which launching global exporting and competing on the world stage can be daunting. Most emerging businesses are dependent on new technology in a competitive field and tilt toward building a secure foundation of cash flow and steady customer base domestically. But cleantech is a field where the path to commercial success might start in international markets, Gruenthaler says. The TCS goal is to ease this path.

Cleantech Global workshops will get you to the right organization, program and key contacts.

Calgary-based trade commissioner Lauren MacLennan advises the companies with which she works to see global trade as a hedge against sinking domestic commodity markets.

Many of Canada’s western-based cleantech leaders have grown out of Canada’s fossil fuel industry, where oil and gas downturns are a part of the business cycle, MacLennan says. This volatility has driven firms toward innovation and developing new technology around small-scale hydro, solar, energy storage and smart-grid energy efficiency, where extended growth is forecast.

“They all generally tend to be small,” she says. “Where there might not be the client base for them to grow in Canada, they’ve looked abroad for opportunities.”

Gruenthaler likens her job to missionary work: demystifying the international trade scene for business leaders who might think they’re still a few years away.

“I have had companies in the first year or two say: ‘no we are not interested in exports.’ Three years later, ‘Now we’re interested in exports,’” she says. “Maybe they’ve seen a peer achieve success in international market. Maybe they decided they needed to diversify their customer base. It’s like taking a horse to water. You can only continually provide the business case for export sales, and encourage companies to consider this as an option.”

Canada’s cleantech industry is as diverse as the country, trade commissioners point out. Sub-sectors include carbon capture, clean resources, e-mobility, energy storage, fuel cells, industrial bio-products, renewable energy, smart grid, and water technologies. Firms and researchers in all these sub-sectors are active in every corner of Canada, in small towns and large cities, making the benefits of this cleantech boom something we can all share.

In 2016, cleantech, clean energy and environmental goods and services accounted for three percent of Canada’s gross domestic product and provided direct jobs to 274,000 Canadians. Now that our cleantech sector is becoming more widely known on the world stage, four out of every five firms are exporting.

“They don’t really know how much time and effort it takes to chase down a certain segment until they try, because they’re small companies with limited bandwidth,” says Tsui. “Through this process we help them along, they can figure it out through experience. We bump heads into walls with them.”

Gruenthaler and Tsui both cover the cleantech sector exclusively, and circulate through the business community to connect firms and researchers with international opportunities and partners. When a firm commits to an export initiative, the Canadian-based trade commissioners will pull in a team of commissioners based in the region where they are seeking a deal.

At this point, companies begin to really absorb the full value of having the TCS in their corner. Many cleantech firms have made significant investments in patented technology, intellectual property, engineering processes and hardware. They are very conscious of the risk they might take in losing their competitive advantage due to unfair treatment in a foreign market. The TCS helps manage and overcome these risks, as well as gain access to financing and compliance with local regulations.

“It brings a whole different level of confidence on the foreign buyer’s side when the Canadian government is involved and excited about making this deal work out ,” Tsui says.

This has been extremely useful for Cypher Environmental, a Winnipeg, Man.-based firm that has become hugely successful exporting clean water and soil protection solutions. Cypher’s chief executive officer, Todd Burns, has ventured into the export scene both with and without TCS support. He says their involvement always pays off.

“If we are working on a large project, vetting a new potential distributor who has contacted us, or searching for a new distributor or agent in a territory of interest to us, we almost always utilize the Trade Commissioner Service,” Burns says. “We primarily use them for market intelligence and due diligence processes, so when we move forward without them, it is like moving forward blindly, without any boots on the ground support. When we have had TCS involvement, we are more confident and comfortable moving forward.”