One person’s trash is another’s treasure

As a young boy in Greece, Peter Tsantrizos dreamt of owning a garbage truck. Today the chemical engineer is getting rid of waste with environmental technology solutions that turn waste into energy and usable water. 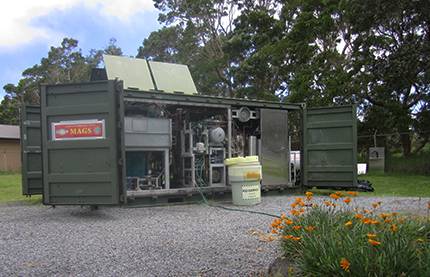 His mother was accustomed to having to reduce waste through re‑purposing and re‑using. When he saw his first garbage truck, young Peter was delighted. He would climb on board and ring the bell to call his neighbours. It was here that this future entrepreneur’s lifelong fascination with waste management began. Dr. Peter Tsantrizos is now a chemical engineer and the founder of Montreal‑based Terragon Environmental Technologies Inc., a company seeking to enable sustainable “zero‑waste discharge habitats” through technologies which transform waste into energy and water that is usable within the habitat.

Terragon’s resource recovery appliances are opening up new off‑grid sustainability options for remote communities, military outposts, factories and cruise ships in markets from the Middle East to the Arctic to the Hawaiian Islands. This disruptive technology provides an advanced solution that could change the way we look at garbage.

Terragon’s Micro Auto Gasification System (MAGS™), uses its patented technology to break down hydrocarbons in waste as wide‑ranging as solid waste, sewage sludge, biochemical waste, pharmaceuticals and packaging. It transforms this waste into a small volume of inert biochar and energy in a treatment reactor the size of a 208 litre drum. Its Wastewater Electrochemical Treatment Technology (WETT™) solutions purify sewage, and oily and greywater for environmentally secure re-use and disposal. The WETT‑O™ appliance is specifically designed to treat marine bilge water. It breaks down the oily emulsions contained in bilge water, removing pollutants from large and suspended solids to oil, organics and heavy metals.

A tour of the Terragon facility reveals a hive of activity, as technicians work to assemble the MAGS and WETT units, customizing them according to their clients’ needs. One such client is the United States military and former Marine Fighter Attack squadron commanding officer and instructor Russell Emons. He has partnered with Terragon to roll its solutions out to the American market.

Located on the Hawaiian island of Moloka’i and surrounded by cliffs that rise 600 metres above the sea, Kalaupapa National Park is so remote that the community’s garbage must be either airlifted by helicopter or removed by the ship that visits once a year.

The island only recently disposed of pallet loads of hazardous materials that had been stored in the community for decades, including car and truck batteries, waste oil, waste fuel, and chemical waste. Those days will soon be a distant memory, as 2018 marks the year Kalaupapa receives its first MAGS™ unit from Terragon Environmental Technologies Inc.

The United States National Parks Service was looking for an economically viable waste management solution that would treat waste produced by the area’s 125 residents, from paper, food and plastic to oil and sewage sludge. Not only will MAGS meet all these criteria, but it will also generate enough energy to provide the community with its first laundry facilities. Eliminating the need for environmentally damaging waste management solutions previously in place, MAGS is allowing the U.S. National Park Service to live up to its mandate to protect residents and the sacred ground on which they live.

“We’re not a solution for the garbage truck or the sewer,” explains Terragon CEO Peter Tsantrizos. We are the company that is trying to look at waste not as waste, but as by‑products that we need to re‑purpose. This creates not only a different technology, but a different approach to the market.”

MAGS can serve communities by creating biochar from cardboard which can be mixed into food waste‑generated compost to produce rich soil. WETT can purify water from contaminated sources for agricultural or greywater use. Together, MAGS and WETT can create clean energy and clean water which can serve the needs of a community and make it increasingly self‑sufficient.

Turning waste into useful matter forms the basis of Peter Tsantrizos’ vision for communities like Kalaupapa. “Giving people the ability to use the things they previously considered to be waste in order to generate heat, food or water is a novel approach not currently offered by any other company,” claims Tsantrizos.

Kalaupapa National Park is home to 30 federally listed threatened and endangered species. Monk seals, humpback whales, giant sea turtles and a coral reef can be found along its shores. It is accessible by foot or mule, by way of an extremely steep and challenging 5.6 kilometre‑long hiking trail. The community’s commitment to sustainability, which now includes the MAGS solution, represents significant and lasting change for its members and the ecosystem that surrounds them.

As CEO of Sustained Turn Corp., an affiliate of Power Ten Inc., Emons says he recognizes the value of the MAGS and WETT solutions for his military clients. The MAGS unit being designed and built for the U.S. Military will allow this client with highly specific needs to be more operationally independent on-the-ground.

Military units currently use what’s called a “burn pit”. This practice is known as “this generation’s Agent Orange,” Emons explains, referring to the defoliant which was in widespread use during the Vietnam War. All waste is essentially burned using jet fuel in an open air pit, which is a danger both to the environment, and to the health and safety of military personnel who must tend to the fire. With MAGS, the military will generate energy while significantly reducing its footprint and increasing the efficiency of its waste treatment.

“I’m so impressed by Terragon’s mission focus and can‑do attitude,” says Emons. “They have dreams of smaller‑yet appliances that are even more efficient and more applicable to day‑to‑day life. They really are focussed on making the world better and that’s the kind of mission that anyone can get behind.”

Thanks to their partnership with Emons and Sustained Turn Corp., Terragon secured two demonstration contracts with the Marine Corps in Hawaii, including one that operated at the headquarters of the marines on the island of Oahu. Together, they developed a portable version of MAGS, nicknamed MAGS‑in‑a‑box, which was containerized in an ISO or intermodal container and tested in training environments in Hawaii and the Philippines. Sustained Turn Corp. is helping Terragon through the arduous process of moving MAGS from what the military considers to be a research and development program into one that is ready for full-deployment and unrestricted use.

Terragon has already enjoyed much success commercializing MAGS for industrial clients, including the maritime industry. Producing high volumes of waste that can often be complicated to unload, cruise ships are ideal clients for Terragon. MAGS units are compact, and because they produce energy, are virtually self‑sustainable.

Other Terragonclients include remote habitats in places such as Nunavut and the United Arab Emirates, research stations in Northern Canada, airports in Alberta, industrial and contaminated by‑product producers in Canada and the United States and a hazardous and medical treatment facility in Costa Rica. Terragon’s solutions appeal to a variety of clients around the world, and the company has begun the process of strategically breaking into key markets with the assistance of an important ally: the Canadian Trade Commissioner Service (TCS).

With TCS assistance, Terragon has made inroads into some important markets, including Germany. There, the company was awarded the prestigious 2017 GreenTecAward honouring “innovative products and projects which lead the way to a more environmentally friendly future”. The TCS also made introductions which led to the securing of a contract from the German government to install Terragon equipment on the RV Sonne geoscience research vessel, which was retrofitted to accommodate its units.

In late 2017, Terragon joined a government trade mission to China, creating many opportunities with potential clients and commercial partners. Terragon sold its first system to the City of Shenzhen and has at least three orders in final negotiations.

Tsantrizos credits the success of the mission in large part to TCS. He says the advantage of developing a relationship with trade commissioners is clear: “Beyond opening doors, the Trade Commissioner Service also offers credibility, which is a big factor,” he explains. “Potential clients, partners and investors perceive you differently when you arrive accompanied by a government representative. It sends a strong signal to the other party that you’ve been vetted by the Canadian government, and are a legitimate company. This is incredibly powerful in terms of opening doors and being recognized internationally, particularly in markets that are culturally different from Canada.”