Sweden has a long history of filmmaking, as the home of director Ingmar Bergman and stars of the silver screen such as Greta Garbo and Ingrid Bergman. Today the country is looking to Canada for training in the speciality field—and beyond. 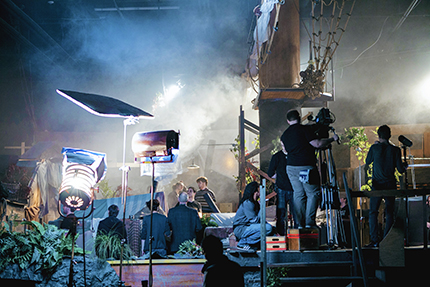 Swedish students are being trained at the Vancouver Film School (VFS) in disciplines from film and television to high‑technology entertainment arts. With the assistance of the Canadian Trade Commissioner Service (TCS), Sweden is a vibrant source of international student recruitment for Canada’s educational institutions and has become a healthy market for the well‑known school.

Jon Bell, managing director of the school, says that it offers intensive one-year courses that stress hands‑on experience in areas from film production and acting to game design and 3D animation and visual effects. VFS, which was established in 1987, has an effective international strategy that brings 40 to 50 per cent of its more than 1000 students from abroad, with about two dozen Swedish students attending each year.

He says that number was “considerably lower” before the school started participating in Sweden’s huge Saco Student Fair, in partnership with the TCS. The annual fair is held in late November and early December in Stockholm and Malmö.

The school has also organized workshops with its faculty in Sweden with the support of the TCS, events that are helpful in introducing its specialties such as script‑writing to new audiences abroad. “It generates awareness so people are talking about us out there,” Bell says.

Christian Ekstrom, a trade commissioner in Sweden responsible for the education sector, says that with the school’s involvement in the fairs and special events, as well as making key contacts in the country, “VFS is a well‑known name in Sweden now.”

The links between Canada and Sweden are strong, Ekstrom points out, and the two countries have relatively similar cultures. It helps that Vancouver is a safe, highly liveable city and the school has an excellent reputation, he says. “You have to get the students, but in order to do that you have to get buy‑in from the parents.”

VFS is located in the heart of downtown Vancouver, which is known both as “Hollywood North” and “Silicon Valley North” for its vibrant and thriving creative economy, Bell points out. Sweden and Canada are alike in their climates, he says, and Swedish students at the school tend to be highly fluent in English.

One of them is Mimi Fürst, 29, a student from Stockholm who is currently studying game design at VFS, learning about all aspects of the game‑creation process. A graduate of a university film animation program in Sweden, she first heard about the school from a friend who had gone there, and especially loves its practical nature.

“It is really similar to industry and you get so many tools, you learn so much…I want hands-on courses that lead to a job,” says Fürst. She hopes after she graduates in April to work as a 3D modeller for games, and she dreams about being involved in creating concepts and narratives for games.

She says that Vancouver, which has a number of game design studios where she would like to work, is a safe, comfortable and friendly city, with a highly global environment. “It’s so international that I never feel like a stranger here," Fürst comments.

Michelle Thorén, an education specialist for the TCS in Sweden, says the country’s education system fits with Canada’s. Students there typically spend one year studying abroad and are looking for English programs, she says. Meanwhile, the UK and U.S. are declining in popularity as education destinations, with political issues and higher costs there. “The interest in Canada has increased greatly in the last couple of years.”

Bell says that the TCS plays an integral part in the school’s success in Sweden and other markets. “My experiences with the trade commissioners have been phenomenal,” he says, noting that the service works well in tandem with BC Trade & Investment. “We try to make inroads through those offices wherever they exist.”

The TCS particularly helps to “validate” VFS and makes introductions to contacts at companies and local schools that can become partners on the ground, Bell says. “Trade commissioners know the lay of the land wherever they are. It’s a quicker way for us to get our footing and find inroads wherever we go.”

VFS finds interest in the different specialties and programs that it offers country by country, Bell says. Sweden and indeed all of Scandinavia are especially well known for their video and mobile gaming industry and are looking for training in that field, for example.

International recruitment brings a “rich diversity of experiences and stories” to the student body, Bell says. Classmates share their global perspectives and especially become important contacts for VFS all over the world after they graduate.

Alumni of the school spread the word about their positive experiences there (and the excellent jobs that many find after graduation.) And they are also an important element of future student recruitment, Bell adds. “Word of mouth is the best advertising that you could ever hope to have.”