Having suffered from below‑average precipitation for two years out of three this century, it’s no surprise California is thirsty for Canada’s innovative water solutions. 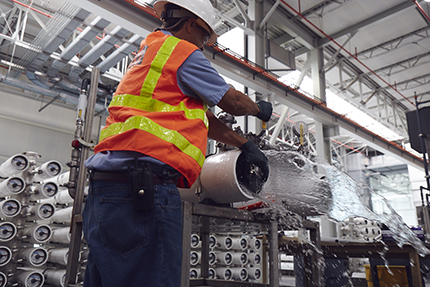 Difficult climate conditions have made it an on‑going challenge for the state to fill its municipal groundwater basins. The basins have seen production losses roughly equivalent to the annual needs of an entire city. Unsurprisingly, “dry California” has been eager to find innovative solutions that will ensure a safe, stable and reliable water supply for its population of nearly 40 million. Several of those solutions belong to Quebec City’s H2O Innovation Inc., and its subsidiary, the Vista, California‑based Piedmont Pacific Corporation.

H2O has enjoyed strong and rapid growth within the international water and wastewater management industry of more than $100 billion. H2O now ranks among North America’s top membrane filtration system providers, and its Piedmont division dominates 50 percent of the world’s anti‑corrosive couplings market. The Canadian clean technologies (cleantech)company has set its sights on taking the pole position in certain niche areas. Indeed, through its handful of divisions and acquisitions, H2O positions itself internationally as a well‑rounded partner for the development of water management projects.

Orange County, California’s groundwater basin provides 2.5 million people with approximately 75 percent of their potable water supply. As it has rolled out each phase of its Groundwater Replenishment System (GWRS) facility, the Orange County Water District has turned to H2O and its subsidiary company Piedmont to provide the expertise and solutions needed to ensure it remains state of the art.

One such technology is based on reverse osmosis. The membrane filtration technology provided by H2O in the first phase of the GWRS facility’s development plays a critical role in sifting impurities such as dissolved salt, chemicals, pharmaceuticals and organic matter, including suspended solids, protozoa, bacteria and some viruses, from Orange County wastewater.

This is done in large part by reverse osmosis spiral wound elements made from layers of small‑pore semi‑permeable polyamide membrane, permeate and feed spacer rolled around a perforated core tube. Water pressure is measured in pounds per square inch (PSI). Small pores of 0.0001 microns, combined with pressures operating between 125 and 1000 PSI mean that the reverse osmosis membranes filter out almost everything, resulting in nearly pure water. Water that has passed through the membrane is collected by the core tube and travels to the permeate stage of treatment. H2O’s reverse osmosis system also includes feed pumps, piping and valves.

Preferred by the Orange County Water District for their anti-corrosive properties the couplings produced by H20 subsidiary, Piedmont, are an important component of the facility’s phase two expansion. Piedmont offers four types of couplings: plastic composite, stainless steel, duplex and super duplex. The choice of coupling is determined by the type of water being purified and the pressure at which it must be treated.

The GWRS facility takes treated wastewater that would previously have been discharged into the ocean and purifies it using a three‑tiered system of microfiltration, reverse osmosis and ultraviolet light with hydrogen peroxide. H2O’s membrane filtration reverse osmosis equipment and expertise are key components of the GWRS facility. Its Piedmont mechanical couplings were considered by OCWD executives to be so indispensable, that they insisted they be used in place of inferior quality components produced elsewhere, which were initially proposed for use in the plant’s expansion.

As  OCWDdirector of water production Mehul Patel explains, their relationship with H2O as suppliers of reverse osmosis equipment was invaluable in starting up the Groundwater Replenishment System.

“In any large indirect potable re-use project, the reverse osmosis system is the workhorse. It provides the contaminant removal that is needed, specifically organic and emerging contaminant removal. It has to be well‑built and operate in a way that will produce the water we need. Without the reverse osmosis system there is no project,” he says, adding that the district’s relationship with Piedmont and H2O has led to the successful expansion of the world’s largest indirect potable re‑use facility.

OCWDis a model for water recycling in the United States, and H2O plays a key role in that success by helping to counter the impact of severe drought conditions in the state of California through its innovative, state of the art water and wastewater treatment technology. OCWD is working towards a system that will recycle all possible available treated wastewater to help replenish the local groundwater aquifer.

That’s music to the ears of Guillaume Clairet, H2O’s chief operating officer, who is passionate about helping the water sector evolve by changing industry and public perceptions.

Clairet is an advocate for the kind of direct‑to‑home technology that will allow municipalities to bypass the costly and risky step of re‑introducing treated water into the ground, where bacteria could potentially re‑contaminate it. Given modern water treatment methods, Clairet considers that this environmental buffer is no longer relevant.

Water treated in the GWRS facility using H2O technology currently meets or exceeds all U.S. state and federal drinking water standards. Clairet is convinced that as the population becomes more familiar with these systems over time, as well as increasingly comfortable in the knowledge that they are secure, they’ll overcome their reluctance to drink recycled water. And that, Clairet says, will make all the difference.

University paid off in a big way for Guillaume Clairet.

The chief operating officer of the Quebec City‑based H2O Innovation Inc. credits an encounter with Canadian Trade Commissioner Service (TCS) representatives while a student at Université Laval with sparking a business relationship that has helped the company he would later join secure multi‑million‑dollar contracts in 26 international markets.

The trade commissioner Guillaume Clairet has worked with in the years since joining H2O in 2004 have opened access to various trade missions and roadshows, as well as to a robust network of local contacts in the United States, South America, Asia and the Middle East. These contacts would become H2O’s clients, partners and suppliers.

“When we talk about wastewater treatment companies in Canada, H2O is a name that always comes up,” says Emilie Roy, a trade commissioner based in the TCS regional office in Quebec City. “The company has successfully executed large projects around the world, and we’re very pleased to have helped H2O open markets since 2010.”

Winner of the prestigious Water Technology Company of the Year at the 2016 Global Water Awards against formidable competition from large multinationals, H2O was tapped for its many innovative technologies. While its FiberFlex membrane module system and remote monitoring solutions caught the judges’ attention, the company was more specifically recognized for its use of smart technologies as a means to bridge the roles of systems integrator and chemical supplier.

Clairet, a native of Québec City, says he hopes to see H2O Innovation grow into a source of national pride and become the “Bombardier of the water industry”. The fact that H2O Innovation ranks among the top Canadian companies in the world in a sector Clairet qualifies as “noble” would seem to indicate that this clean technology company is well on its way.