From 2011 to 2017, women‑owned small and medium‑sized enterprise (SME) exporters have gained traction as their share of all exporters doubled from 7.4 percent to 14.8 percent, although their share of all SMEs has remained relatively constant at around 15.6 percent of SMEs over the same period. 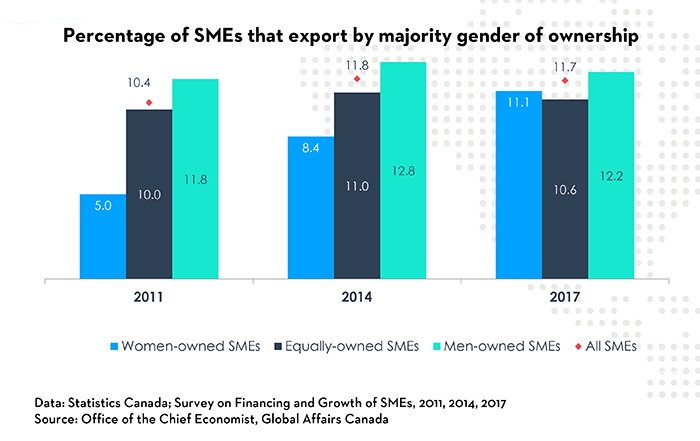 Indeed, while women‑owned SMEs lagged behind the average of all SMEs by 5.4 percentage points in 2011, the gap was consistently reduced over the years and now stands at 0.6 percentage points. According to the Global Entrepreneurship Monitor, the number of women‑owned businesses is growing at an unprecedented rate compared to the historical figures, even outpacing that of men.2 For women‑owned SMEs, internationalization appears to be one of their strategies for success.

While women‑owned SMEs may experience a number of gender‑specific challenges3 to grow their businesses and reach foreign markets, the data suggests they are taking their place on the international stage. Visit the Canadian Trade Commission Service website to learn more about programs available to Business Women in International Trade (BWIT).

1 SMEs are Canadian businesses with one to 499 paid employees and at least $30,000 in annual revenues.

3 Orser et al., Exporting as a Means of Growth for Women‑owned Canadian SMEs, 2004.