When Patrice Mousseau started looking six years ago for a natural product to treat her baby daughter’s eczema, she never dreamed where the search would take her.

Mousseau, an Ojibway out of Fort William First Nation who was raised in Sioux Lookout, Ontario, couldn’t find anything that worked for her then eight‑month old girl. Her daughter’s skin was so dry and sensitive that it bled, but medical treatments involved topical steroids, which had issues such as worrisome side effects. So Mousseau headed to her kitchen to cook up a home remedy. 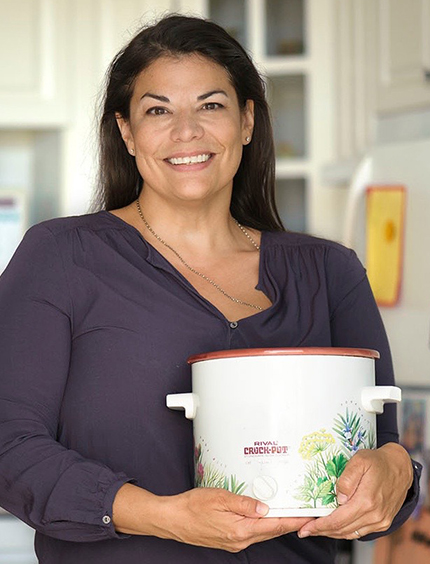 With a background in journalism, she did an extensive investigation, looking into medical research, academic studies and traditional medicines. “I took all that information and put it in my crockpot and had something that cleared up my daughter’s eczema in two days,” Mousseau recalls.

There were just five organic ingredients with proven anti-inflammatory properties. Once her daughter’s condition went away, she took the balm that was left from that first batch and gave it to women in her mom‑and‑baby Facebook group whose children were having similar eczema issues.

“I had to make three more crockpots full because everybody needed some,” says the single mother, who lives in Coquitlam, B.C., outside of Vancouver. Within a year she was selling the product at area farmers’ markets, and in 2014 she went retail, calling her startup Satya Organics Inc. “It was a proper business,” remarks Mousseau, the company’s founder and CEO, explaining that Satya is a Sanskrit term that means “to pursue a higher truth”.

Her product, Satya Organic Eczema Relief, is sold today in some 800 stores across Canada as well as online. It is also beginning to find a market overseas, with the assistance of the Canadian Trade Commissioner Service (TCS) and Trade and Invest B.C.

An international market “wasn’t even a plan of mine,” Mousseau says, when she attended a local trade show in Vancouver and someone approached her and bought a jar of the cream. That buyer was Janet Cho, the manager for Hong Kong in B.C.’s Ministry of Jobs, Trade and Technology, who was looking for products that might make good export candidates.

“I used it myself and I thought it worked quite well,” says Cho, who saw a market in the Hong Kong region for the eczema cream. Her team assisted Mousseau with issues such as sourcing glass jars for the business and put her in touch with colleagues in the Hong Kong office of Trade and Invest B.C., as well as the TCS. “We have a great working relationship,” Cho says.

Mousseau’s main contact in the TCS in Hong Kong is Kitty Ko, the trade commissioner there responsible for consumer products such as beauty and skin care. Ko helped her identify local distributors interested in products like hers and to deal with details such as labelling and packaging, as well as regulatory matters.

An initial step for Satya was to “build up the confidence to consider exporting in the first place” through educational sessions, says Ko, who works closely with the B.C. trade reps in Hong Kong to find customers for Canadian companies. She notes that skin‑care items are “very popular” there, as are organics and “mother‑and‑baby” products like Mousseau’s. Hong Kong is a relatively open market as well as a hub for online and offline sales in Southeast Asia, she says.

Mousseau reports that her research shows that Eczema is a growing problem in Hong Kong, and notes that the TCS there has been “super helpful” with all kinds of matters. “They’re such cheerleaders, it’s just great,” she comments. “There’s not a lot of bureaucracy, which I loathe, they’re just people and they’re trying to help you and help your business grow.”

She says that “if I have questions, the trade commissioners answer them…They’re very personal, very human.” Ko helped her find and contact potential distributors. She looked for those with the best networks and reputations who gave her the “gut feeling” that they would be the “right fit”.

The distributor she selected is the Trinity Trading Company, which has been in business in Hong Kong for more than 50 years and specializes in medical equipment, pharmaceuticals and consumer health products.

Richard Chen, the firm’s director of pharmaceutical and skin care products, says he was contacted about Satya by the TCS, which “created a bridge” to the company. He then began corresponding with Mousseau and quickly saw Satya Organics Eczema Relief as a good product for Hong Kong, Macau and other parts of Asia Pacific.

He says the fact that it’s pure and organic is “definitely a selling point,” and it can be sold through doctors’ offices as well as health food shops and specialty retailers. He notes that “Canada has an excellent reputation” for such products and the fact that the cream has been given a natural product number by Health Canada is “another plus for Satya.”

Mousseau, who’s been winning kudos and awards and secured some funding to further develop her organic eczema relief through CBC TV’s Dragons’ Den program, says that today she’s “all about slow growth, I’m not rushing into anything.” She considers Hong Kong a test market, and is approaching this as a soft launch. “I’ll see how it goes.”

Exporting has been a steep learning curve, she says, and the fact that she could talk to TCS and B.C. trade experts “about making that leap has been instrumental.” She tells entrepreneurs like her that “it’s your business, so you make the decisions,” and cautions them to be sure that they’re ready to take advantage of what’s out there internationally.

“This thing has been moving so fast I’m just trying to keep up with the opportunities,” says Mousseau, who’s grateful that “steroids are no longer the only line of defence” against eczema. She sees endless markets around the world for her cream. “I’m not making it in my crock pot any more.”

Get prepared for the Hong Kong market

Hong Kong has interesting opportunities for small companies such as Satya Organics Inc. that are planning to go global, but it’s important to look for resources, line up partners and approach the market there in the right way, experts say.

Kitty Ko, a trade commissioner for the Canadian Trade Commissioner Service (TCS) in Hong Kong who is responsible for consumer products such as beauty and skin care, says the service offers Canadian companies advice and assistance to establish themselves there and beyond.

“We can help them get prepared for this market,” she says.

Janet Cho, the manager for Hong Kong in B.C.’s Ministry of Jobs, Trade and Technology, says that once companies like Satya are in the Hong Kong market, it’s important that people are aware of them. She recommends that firms “tell the story” of their product, offer evidence about its effectiveness and show that it is successful in Canada.

Identifying a product as Canadian is a critical selling feature. “The Canada brand goes a long way. A maple leaf on your packaging will add that signal,” she says, noting that Hong Kong particularly has a large expatriate Canadian population that is interested in products from here.

Emily McLaughlin, a trade commissioner and consul in Hong Kong, says that it’s a good place for companies looking to diversify to “come and start trying out different markets,” especially for niche items and new and innovative technologies. “Hong Kong is a good testing base for the rest of the region,” she says, and it’s not as complex to enter as markets such as China or Indonesia.

Hong Kong has a common law system, English is spoken in business, it’s easy to get logistics support and the TCS and organizations like Trade and Invest B.C. are very active there, she says. “It expands your network when you have boots on the ground, both in Canada and working with companies in Hong Kong.”

McLaughlin says there are “a lot of things that people just don’t know” in small companies with little export experience. “They need a lot of hand holding.” As well as the TCS, a partner in the region “can do things for you,” but it’s important to do your due diligence to find the right one, she says. For instance, get a sense of who they are and their lines of business. “There’s no one size fits all.”

Challenges for small firms going to Hong Kong include their production capacity and marketing abilities, McLaughlin says. “Companies need to have enough budget or a good partner who can assist with making sure the product is going to be sold once it’s here,” she says. “You don’t want to put in the time and investment and then forget that last piece.”

She cautions small businesses not to “stretch yourself too thin too quickly,” for example to have enough product on hand. “You have to be able to meet demand or people will move on,” she says. “It’s about introducing new things and sustaining the momentum.”

Hong Kong is considered a “springboard” and people from the wider area come there to check out such products, she says, so it’s helpful to have the TCS network across the region working on your behalf.

“We have experts such as Kitty in markets all over Asia helping companies sell their goods and services,” she says, noting that it’s also helpful for firms to have a presence in the region. “You have to dedicate time and money and a person or people to the effort. It requires a commitment and follow through, but it will be worth it.”