Representation of women in management is on the rise

In Canada, the growth of women in management positions from 2014 to 2018 has surpassed that of men by 2.0 percentage points, reaching 7.5% compared to 5.5%. Although there are still twice as many men in senior management positions as women, women and men are almost on par in specialized middle management occupations.1 Moreover, women are more likely to hold a management position in an industry in which women are well represented, i.e. services-producing sectors, such as finance and insurance. Canada’s national goal is to have women comprising 30% of board directorships across the country by 2019. Figure 1 presents the share women directorships across various types of corporations. As of 2018, women comprised 27.8% of Canadian corporate boards according to the Global Diversity Tracker, slightly below but within striking distance of the 30% target. 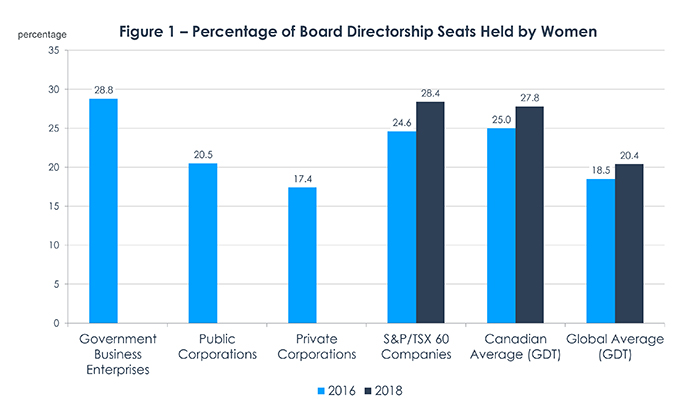 In 2016, 42.3% of Canadian corporations had at least one woman on their board of directors, although women accounted for only 19.4% of all directorships in Canada (see disaggregation by sector in the first three columns of Figure 1). According to the latest study by Statistics Canada of this subject, women are better represented on boards in industries such as finance, management of companies and enterprises, and utilities. Canadian financial services are notably gaining significant traction in international trade.2 However, women are under-represented on boards in mining, oil and gas, and manufacturing—industries with some of the highest shares of exporting firms in Canada.