Flying Kraken is the brainchild of husband‑and‑wife team Greg Huculak and Rose‑Ann Tisserand. The duo has a talent for cooking up whimsical cartoon characters—as the company’s logo, which features a legendary sea monster in a striped scarf, suggests. 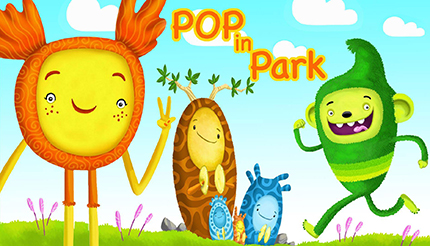 Tisserand and Huculak spent over 20 years working with big names in animation before deciding to focus on their own intellectual property. They co‑founded Flying Kraken—an animation studio based in Vancouver—in 2012.

Just six years later, the company’s client list includes heavy hitters in children’s entertainment such as Nickelodeon and PBS Kids. The company also has an original pre‑school comedy, POP in Park, which is in development with TVO in Ontario.

Flying Kraken decided to take POP in Park outside North America in 2017. “We felt it had international reach,” says Tisserand. “So, we attended le Marché international du film d’animation (Mifa) in France. It’s the place to go for people in our industry.”

Trade commissioner Clément Thiébault, based in Paris, also had plans for Mifa 2017. The Trade Commissioner Service (TCS) was collaborating once again with Telefilm Canada to manage a Canadian business presence at the event—but, says Thiébault, “what was missing was the matchmaking element.”

Fortunately, new funding meant the TCS was increasing its investment in the cultural sector. Thiébault identified Mifa as a priority. “It’s one of the most important events for the global animation industry,” he notes, adding that, “France is ranked third worldwide for animation production. Collaboration with Canadian companies is encouraged through mini treaties, which give access to funding and tax rebates.”

Thiébault hired a consultant—Justine Bannister, who specializes in the animation sector, to facilitate B2B meetings at Mifa. He also worked closely with Telefilm Canada to promote the matchmaking to Canadian attendees.

The TCS contacted Flying Kraken and advised the company to apply for the matchmaking service. “They were an ideal client for this program: small, new to the French market and based in a location that’s often overlooked by French buyers,” notes Thiébault.

Tisserand and Huculak began preparing for Mifa with the TCS consultant. “She was fantastic—she emailed us night and day to set up meetings with potential partners attending the event,” says Huculak.

The team was greeted by Bannister and Thiébault when they arrived at Mifa. “Justine was everywhere and in constant contact. Our trade commissioner was very supportive and met up with us several times. They made the trip very productive for us,” says Tisserand.

The business met with six distributors, producers and broadcasters—including major names such as France Télévisions. The team had the opportunity to pitch POP in Park and learn how broadcasters operate in France.

One of the organizations Flying Kraken met was APC Kids—the children’s entertainment arm of About Premium Content (APC). APC is a boutique distributor and co‑producer of international TV programs, with offices in the UK and France.

Flying Kraken entered negotiations with APC Kids shortly after the event. The two companies agreed to a licencing and distribution contract for POP in Park worth up to $7 million.

“The team’s focus was critical to their success. They listened carefully, prepared a good pitch and adapted it to each business,” reflects Thiébault.

He adds, “Our matchmaking service resulted in plenty of partnerships for Canadian and French animation companies. We’re hoping to repeat this success again in 2019 for the third year running.”