“Digitalization” is changing the way Canadians trade. Non‑comprehensive evidence shows the positive impact of “digitalization” on Canadian exports. Between 2006 and 2016, Canadian exports of potentially ICT‑enabled servicesFootnote 1 grew 67%, compared to 37% for ICTFootnote 2 services exports, 30% for not potentially ICT-enabled servicesFootnote 3 exports, and 17.4% for merchandise exports. 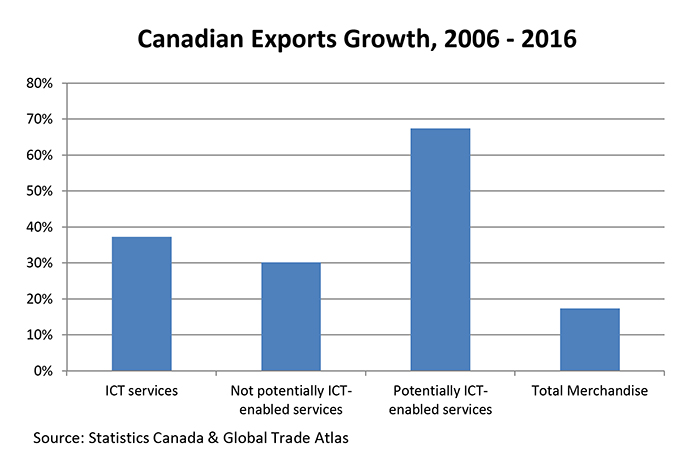 Why is the evidence non‑comprehensive? First of all, there isn’t an agreed upon complete definition of “digitalization”, but there is emerging consensus that digitalization is a process that is spreading throughout the economies rather than being just a sub‑sector of the economy. Secondly, the data on digital trade is incomplete and cannot measure certain transactions in the digital economy. For example, while merchandise trade statistics contain merchandise that has been ordered through e‑commerce and other digital platforms, it does not distinguish whether or not the merchandise was ordered digitally or non‑digitally. Similarly, some services delivered by individual Canadians to foreigners over the Internet: for example, a Canadian delivering language training services over the Internet to foreigners could be missing in current services trade statistics since current services trade statistics focus on transactions by businesses.

Digital technologies are one way for Canadian exporters to access foreign markets. Strong growth in ICT services and potentially ICT‑enabled services indicate that Canadian firms are already leveraging these technologies to grow their services exports abroad.

1 Defined by the United Nations Conference on Trade and Development (UNCTAD) and Statistics Canada as “services that have the possibility to be delivered remotely over ICT networks but that could also be delivered otherwise.”

3 Defined by UNCTAD as services that cannot be potentially delivered over ICT networks.