The world’s population is aging. The number of people aged 60 years and above is expected to more than double by 2050, with two‑thirds of the increase occurring in China. Healthcare systems and younger generations face an unprecedented burden of care as a result. 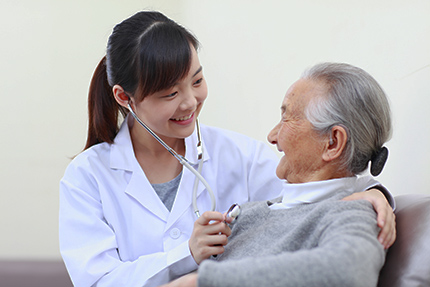 In China, one in three adults will be aged over 65 years by 2050 compared with around one in eight today. The country’s rising life expectancy and falling birth rate have created a phenomenon known as the 1‑2‑4 family, where one child must support two parents and four grandparents. This often proves an impossible challenge, leaving seniors more vulnerable to health problems and loneliness.

“Seniors aged over 80 years often have chronic health problems. The hospital isn’t usually the best place to send them, yet it’s the main point of care in China,” says Raymond King, an independent senior care advisor and former Vice President of Business Development for the Toronto‑based Baycrest Global Solutions.

He adds, “Seniors need access to care in the community — clinics where they can get their blood pressure and heart rate checked, and receive rehabilitation for injuries. They also need stimulation to prevent loneliness and depression, and to slow the onset of dementia.”

The Chinese government is investing in community‑based programs to close the gap in senior care and lift the burden on hospitals. Canada is no stranger to this issue. The structure of our healthcare system is closely aligned to those in China and other North Asian countries, so we understand the challenges they face. This is evident in partnerships between Chinese organizations and Canadian universities, such as Dalhousie University in Halifax and the University of British Columbia.

Born in the late 19th century, Dr. Norman Bethune is a world‑famous Canadian surgeon and medical innovator. He brought modern medicine to rural China during the Second Sino–Japanese War, treating wounded soldiers and sick villagers alike. Bethune’s service made a profound impression on the Chinese people, who erected statues in his honour throughout China. His story continues to be a constant reminder of the bonds of friendship and cooperation between Canada and China, notably including the founding of the Norman Bethune International Peace Hospital.

Baycrest Health Sciences, the research and training hospital affiliated with the University of Toronto, has focused solely on care for the elderly for more than 100 years. In 2011, Baycrest Global Solutions was founded to distribute the hospital’s expertise in aging and brain health to the world — with China as one of its largest customers. “These kinds of partnerships are critical to the evolution of China’s healthcare system,” says King.

There is ample opportunity for Canadian health companies to provide much needed solutions in China’s senior care industry. The market is valued at approximately $756 billion — a figure that’s expected to climb to $2.5 trillion by 2030.

Canadian companies have expertise in sought after senior care services, such as:

“We need to pursue partnerships that are strategic, scalable and offer long‑term benefits to China,” says King. “By blending cultural sensitivities with an understanding of China’s healthcare sector, we do a great job of translating our policies and processes into their markets.”

“But it’s not just about our intellectual capital going abroad,” King adds. “It’s also about what we learn and bring back. It’s very much a win‑win.”