For a business that deals in robotics, Kinova® is all about humanity. The company’s mission is “to empower humanity to go well beyond its limitations and achieve the extraordinary” — whether they’re a person living with physical limitations, a researcher or a medical practitioner.

Kinova was founded in 2006 by two engineering graduates, Charles Deguire and Louis‑Joseph L’Écuyer. As a young man, Deguire cared for three uncles with muscular dystrophy — one of whom, Jacques, invented a makeshift arm to help pick up objects. This inspired Deguire and L’Écuyer to develop their award‑winning assistive robot, JACO, named after Deguire’s uncle. 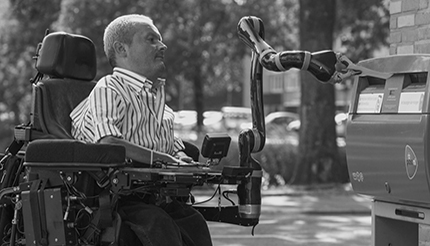 Mounted on a power wheelchair, the KINOVA JACO® Assistive robot helps people carry out everyday tasks, from brushing their teeth to making a phone call. The device is now used in more than 40 countries.

“We want to make people’s lives easier and improve the quality of their day‑to‑day living. For me, seeing the difference our products make is my real reward,” says Laurie Paquet, Vice‑President of Assistive Technologies, Kinova.

Kinova realized from the outset that it needed to export in order to bring its assistive technologies to people in markets that are more open to funding. “Our product would not have been funded through North American healthcare systems first. But Germany and the Netherlands were a different story. Their systems were already open to prescribing medical devices for people living with physical limitations,” explains Paquet.

The business knew where it needed to go — but it needed help getting there. So, in 2009, it reached out to the Trade Commissioner Service (TCS).

“We worked with the TCS to gain a better understanding of distribution networks,” says Paquet. “Their reputation is an invaluable advantage for us. When you’re a small business, meetings are often cancelled last minute, or just not taken seriously, but no one wants to cancel on the TCS!”

The Assistive division soon began trading in Germany and the Netherlands, followed by Italy, Spain, Portugal, France, the UK and Australia. Kinova also developed a Research division, which now serves over 500 academic and industrial research centres in 50 countries.

The company maintains a close relationship with the TCS. “We go to them regularly with a list of organizations we want to meet. They take time to listen to our needs. They’re now an important part of our growth strategy. They help us develop new industries by gathering data for selected markets or keeping us up‑to‑date with funding programs we could benefit from,” notes Paquet.

“We know we could never have grown this quickly without the TCS’s support. We continue to learn so much from them,” says Paquet.

Like all innovators, Kinova may have experienced a few speed bumps on its journey — but it has a proven knack for turning challenges into opportunities.

One such challenge presented itself a few year ago, when Kinova ran into issues with a German distributor. “We talked the problem through with the TCS and realized it was a good time to launch our own sales office in Germany. Not only would this fix our issue, it would give us more control over the service provided to our clients in the future,” says Paquet.

Kinova opened an office in Bonn, Germany, in 2017. “The TCS helped us gather all the best options, including locations, partners and suppliers,” comments Paquet. “They even put us in touch with another Canadian company that opened an office in Germany, which gave us a benchmark.”

Today, Kinova’s team is 250‑strong across three continents. Its newest office is in Shanghai, China, with another office planned to open in the U.S. in early 2019.

The business is determined to improve access to robotics technology — and greater adoption – by challenging perceptions, policy and regulations worldwide.

“We’ve encountered many roadblocks along the way,” reflects Paquet. “But it’s worth it when the result is making people’s lives easier and helping them achieve extraordinary things. It's a great endeavor and it’s not expected to be easy. Thanks to the ongoing support of the TCS, we know we will continue to make great strides, set new standards and make a real difference.”