A Canadian company has won a major contract to install Barcelona’s new bike‑sharing system, with a successful partnership approach, leading technology from Canada, the advantages of the new Canada–EU Comprehensive Economic and Trade Agreement (CETA) and assistance from the Canadian Trade Commissioner Service (TCS). 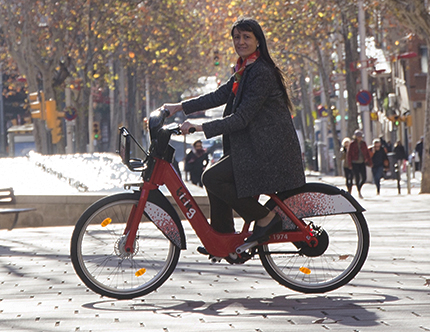 PBSC Urban Solutions of Longueuil, Quebec, began installing a fleet of 7,000 new bicycles — including 1,000 “pedal assist” models equipped with electric motors — in the city starting in January, the biggest of such system in Spain. With prospective plans for Barcelona to expand the popular “Bicing 2.0” system, as well as additional opportunities to install and replace bikeshare services in the region, the country and elsewhere in Europe, PBSC is hoping the contract will be a stepping‑stone to additional lucrative business.

“Our turf is the world,” says Adrian Popovici, chief legal officer for PBSC. The firm started in 2014, taking over the former Public Bike System Company, a non‑profit organization from Montreal that began in 2008 to provide so‑called Bixi Bikes in the city and had grown to several systems installed on three continents. Today PBSC has some 80 staff and has bike‑sharing installations in 32 cities around the world, including Washington, Detroit, London, Reykjavik, Santiago, São Paulo, Rio, Buenos Aires and Melbourne, with ever more in the works.

Popovici, a member of the board of directors of the North American Bike Sharing Association, says that in PBSC’s set‑up, the bikes are parked at “smart stations” (for example there are 519 of them in the Barcelona system). They can be rented by riders via mobile apps, with little effort required to “undock” and then “dock” them thanks to a simple process of scanning a “QR” code. The bicycles are robust and secure, he says, with state‑of‑the‑art technology developed with Devinci Cycles in Chicoutimi, Quebec. In PBSC’s business model it supplies all of the equipment and software to a customer, typically a city, and then a partner, usually a local operator on the ground, maintains and rebalances the overall system.

Look for cleantech opportunities in Spain

Opportunities are abound in the Spanish market for Canadian companies with clean technology products and services.

Nadia Rego, a trade commissioner in Madrid who covers the cleantech and infrastructure sectors among others, says that “Spain offers great possibilities…It is one of the countries that is leading the growth in the European zone.”

Spain, which she calls “the sunniest country in Europe,” has set a target to reach 100%of electricity produced from renewables in 2050. “This will imply significant investment in generation,” she comments, noting that the concentration of population in urban areas also drives the need for investment in water, waste and mobility solutions.

“These are cities that want to offer modern, quality services to citizens and tourists,” she comments, pointing out that Spain last year received 82 million tourists, which makes it second in tourism in all of Europe, after France.

Spain is developing a lot of cleantech projects related to smart cities, where Canadians have strong capabilities in fields such as bike-sharing systems, but also transversal technology like sensors and data analytics, Rego says.

The number of initiatives is growing and investment in smart cities there will reach €2 billion in two years. Yet competition is high, and procurement done by municipalities can be lengthy, she cautions, in fact, it can take from six months to several years to land a big contract. Rego recommends that companies interested in doing business in Spain do their research, put together a dedicated team that can speak the language, enlist the help of the TCS and show up at trade shows and other events where they can meet potential customers, suppliers and partners, as well as the competition.

“It’s important to have the right partner who understands the needs, the culture and the vibes of the city,” stresses Popovici. PBSC therefore relies on the involvement of the TCS to suggest potential partners and help verify them, given the lengthy process needed to pursue a bid and the fact that the resulting contract can extend for a decade or more. “You need to make sure the partner you're dealing with is someone you can trust and who will execute it properly.”

For the Barcelona system, PBSC formed a consortium with Ferrovial Services, a global operator of public services and infrastructure, to bid on the 10‑year, $250 million Bicing 2.0 contract. The company’s joint venture with Ferrovial Services Spain brings the latest technology in hybrid bike‑sharing to the city.

The January launch of the Barcelona system, which replaced a previous service in the city, was a tremendous success, says Aurora Polo, a trade commissioner there who tried out the bikes. “The bicycles have a solid structure, they each proudly display a ‘Made in Canada’ sticker as well as a wonderful modern Barcelona ‘mosaic’ design, and they are extremely light to ride,” she says. “It once more shows how Canadian innovation can lead to success.”

PBSC received funding to help it enter the Spanish market from CanExport, a program run by the TCS that gives companies incentives to develop and diversify their sales abroad and compete more effectively in the global economy. The company now hopes to reproduce its successful model in several nearby cities, she notes, “and the TCS looks forward to supporting them every step of the way.”

Nadia Rego, a trade commissioner in Madrid whose sectors include clean tech and infrastructure, first met PBSC at the Smart City Expo World Congress in 2016, an annual summit in Barcelona focused on urban solutions, one of the largest such events in the world. She says the TCS has fed the company intelligence about procurement opportunities and invited it to present its solutions at promotional events in Spain. Meanwhile PBSC has worked hard to put together its winning bid for the Barcelona project, she comments, with cutting-edge technology like the electric bikes that appeal to all ages, as well as a presence on the ground. The company also had significant support from the Quebec Government Office in Spain.

It helps that Canada is “doing very innovative things” in the cleantech sector, Rego says. For example, it is currently running the Smart Cities Challenge, a country‑wide competition that encourages communities to adopt a smart cities approach through innovation, data and connected technologies. “Europeans are taking notice,” she says, especially as CETA levels the playing field between the EU and Canada.

PBSC was especially helped by CETA in winning the Barcelona contact, Popovici says. The trade agreement allows Canadian companies to compete for government procurement programs, rather than having to be registered in Spain, and CETA eliminated the previous 6% tariff on standard bikes and 14% tariff on e‑bikes, he says. “We can play as if we’re local, and at the end of the day, a few %age points makes a huge difference.”

Popovici says that having the support of the TCS in the bidding process for bike‑sharing contracts is “comforting” for PBSC as well as the local companies and government entities that it deals with.

“In certain countries they don’t know who we are,” he explains. “When we have a trade commissioner setting up a meeting, it’s reassuring for our counterparts to know that we’re backed by the Canadian government.”

He says that Canada is “well respected” and recognized for sustainable technologies and expertise like his company’s bikes. Meanwhile PBSC focuses on keeping its clients happy, with reliable systems and follow‑up service. He encourages others in the young field to “know your market,” find a reliable partner, check out the competition and go after all the resources available.

With the “showcase” Barcelona system in place, Popovici hopes that “this will be our best year.” PBSC has received consistently positive feedback about existing systems, and it is in negotiations to put in or replace bike‑sharing services in several cities in the near future. The company also plans to target a number of new markets, including in Africa and the Middle East, he adds. “There's no limit.”