The TCS’s first professional salesperson to the world

In the early years of the Canadian Trade Commissioner Service (TCS), foreign trade officers were selected primarily though political patronage by the order in council. Author O. Mary Hill, in her book Canada’s Salesman to the World: The Department of Trade and Commerce, 1892‑1939, writes that in 1914, Sir George Foster, Canada’s Minister of Trade and Commerce, tried a new recruiting method. He approached the heads of McGill University and the University of Toronto to have them select graduates specialized in economics who might regard the service as a career.

A one of a kind recruit

The academics being considered had to submit essays on a set topic to the minister, which would become an examination system for future hiring in the service. One of the junior trade commissioners recruited in the first class of university graduates was Dana Wilgress. He was hired straight out of McGill University after a glowing recommendation from his economics professor, Stephen Leacock, Hill writes. 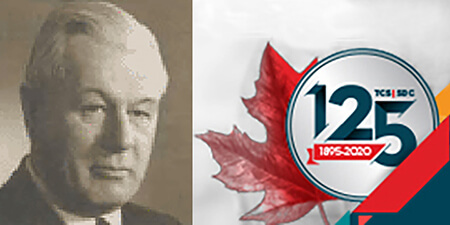 Wilgress was born in 1892, the same year that the Department of Trade and Commerce was established and two years before the creation of the Trade Commissioner Service (TCS). His introduction to the service as a sub‑trade commissioner in 1914 included time in the filing room, the logic being that by reading as many of the files as he could, he would figure out what the job entailed. He then wrote for the Weekly Bulletin, which compiled and summarized the combined reports coming in from trade commissioners around the world, which Wilgress said “put one in touch with all that was going on,” Hill writes.

In 1932, Wilgress was appointed director of the TCS by Henry Herbert Stevens, the Minister of Trade and Commerce, who called Wilgress “one of the most efficient men in the service.” It was a time when exporters at home were demanding better service, and Canada’s trade numbers had fallen. Stevens said that Wilgress was appointed “for the express purpose of lending to the service in Ottawa his wide and practical experience in trade matters abroad,” writes Hill.

Wilgress also became Deputy Minister of Industry Trade and Commerce. He moved to the Department of External Affairs and served as Canada’s first Ambassador to Moscow, first Minister to Switzerland and High Commissioner to the United Kingdom.

In both Bern and London, Wilgress solidified his reputation as a leading expert on the postwar international trading system. He became one of the world’s foremost trade negotiators and was one of the architects of the General Agreement on Tariffs and Trade (GATT). In 1948, he was elected as the first chairman of the GATT Contracting Parties, a position he held during the first five annual GATT sessions.

GATT was succeeded by the World Trade Organization (WTO) in 1995. The organization now has 164 government members and operates a system of trade rules while acting as a forum for trade negotiations and trade dispute resolution.

Throughout its 125‑year history the Trade Commissioner Service’s mission has remained the same, increase Canadian exports. Guided by this simple mission and his passion for trade, Dana Wilgress went from working in the TCS filing room to advancing trade on a global scale.