Why do Canadian firms invest abroad?

In the debate about the benefits and costs of globalization, the issue of offshoring—which is when a company establishes an affiliate in another country—often takes center stage.

While sometimes thought of as “bad” due to the belief that offshoring results in job losses for Canadians and/or the loss of tax revenue, the results of the latest Survey of Innovation and Business Strategy (SIBS) suggests that the reasons that companies engage in this activity are more complex.

As part of the SIBS 2017 survey, Canadian businesses with foreign affiliates were asked about the reasons for employing personnel outside of Canada. Businesses most frequently cited increasing sales (69.6%), accessing new markets (67.5%) and proximity to important customers (62.8%) as their primary reasons for having employees abroad, while reduced labour costs (21.7%) and tax or other incentives (17.8%) were cited much less frequently. 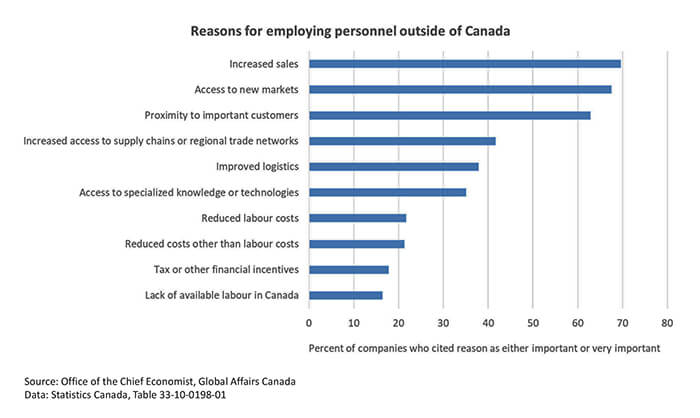 The survey also found that Canadian businesses were more likely to sell goods and services internationally through their foreign affiliates than through direct exports from Canada, illustrating the important role that foreign affiliates play as global sales platforms for Canadian companies.

There are many reasons that businesses engage in offshoring activity and the evidence indicates that foreign affiliates play an important role in accessing new markets and increasing the sales of Canadian companies, which in turn contributes to the growth of the Canadian economy.