Making Canada’s exporters more competitive in world markets has been a consistent goal of the Canadian Trade Commissioner Service (TCS) over its 125‑year history. The way that the TCS achieves this has expanded over time to include the promotion of Canada’s network of trade agreements that reduce and eliminate trade barriers. 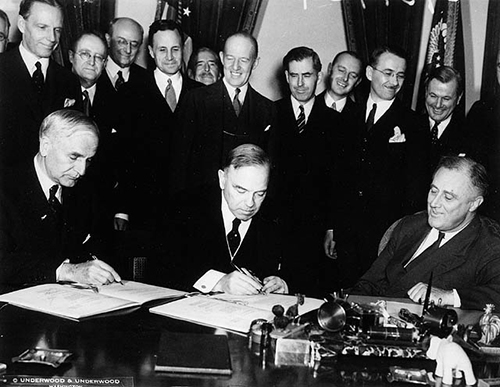 The first trade agreement between Canada and a foreign country was negotiated with France in 1893, and it came into effect in 1895, the same year the first trade commissioner arrived at his post in Sydney, Australia. The deal gave both countries most‑favoured‑nation status and extended minimum tariffs to certain goods, such as Canadian canned meats, fish and fruit. The British also insisted that Canada extend the treatment to it and countries with which it had treaties, including Belgium, German, Sweden and Russia.

When a new trade agreement was established with France in 1907, the discussions included Anatole Poindron, the trade commissioner who had been appointed to Paris in 1902. Particularly notable was the fact that that treaty was renegotiated independently by Canada, a step toward autonomy from Britain. It extended minimum tariffs that by 1910 made France the third-largest supplier and ninth‑largest market for Canada.

Trade agreements—and a vast expansion of exports—followed with a succession of countries such as:

The first trade agreement with the United States was in 1935, and the North American Free Trade Agreement (NAFTA) was signed with the U.S. and Mexico in 1994. NAFTA was re-negotiated and re‑named the Canada–United States–Mexico Agreement (CUSMA) in 2018.

Today, 15 free trade agreements (FTAs) give Canadian companies preferential access to 51 foreign markets, 63 percent of the world’s GDP as well as 1.5 billion consumers. Canada’s exports have evolved from fur, fish and lumber to leading‑edge technology, and complex professional services, which are covered by important non‑tariff elements of such agreements. And a dedicated team of the TCS is ramping up efforts to help Canadian companies take advantage of FTAs as well as other programs and services.

A competitive advantage for Canadian companies

“We are raising awareness among exporters of how to leverage these agreements and succeed abroad,” says Jordan Turley, a trade commissioner in the new TCS Engagement Division. Its responsibilities include FTA promotion and international business development to assist small and medium‑size enterprises (SMEs) that are underrepresented in international trade, such as businesses with LGBTQ2, women, Indigenous and youth ownership.

Canada has begun to develop and implement modernized trade agreements with countries such as Chile and Israel, recognizing that the impacts of trade are not gender neutral. Lucas McCall, an expert on inclusive trade in the trade policy and negotiations branch at Global Affairs Canada, says that Canada’s approach is to seek dedicated chapters on trade and gender in trade agreements, as well as to “mainstream” gender‑responsive provisions throughout them. In such provisions the parties acknowledge and commit to addressing issues such as barriers for women exporters and discrimination in the workplace.

“We’re trying to advance these issues domestically as well as bilaterally and multilaterally,” explains McCall. For example, Canada is trying to build a dialogue and momentum on trade and gender in the World Trade Organization, the Organisation for Economic Co‑operation and Development and Asia‑Pacific Economic Cooperation.

Georgina Wainwright‑Kemdirim, a special advisor on trade and gender in the branch, says the reaction of Canada’s trading partners to the agreements has been “overwhelmingly positive.” While some question whether trade agreements are the place to address social issues, Canada counters that the approach also makes sense from an economic perspective. “Studies show the value and outcomes of increasing women’s participation in trade,” she says. “There are benefits for everyone.”

McCall adds that “there’s a really big missed opportunity in not addressing this,” and notes that Canada is not alone in the matter. It has some key partners, including “mutually supportive voices” at the EU, which has taken up the issue. Canada, Chile and New Zealand have also formed an Inclusive Trade Action Group, which issued a joint declaration on fostering progressive and inclusive trade.

SMEs looking to sell their goods and services overseas often find the customs duties prohibitive and the requirements of doing business in new markets convoluted or unpredictable. “They don’t know where to start,” says Turley, noting that FTAs are an “added bonus” to give entrepreneurs a competitive advantage in certain markets.

Turley says that through these agreements, Canadian entrepreneurs have enhanced access to some 1.5 billion consumers. They are in established markets such as the U.S., the EU and Japan, as well as fast‑growing emerging economies in Latin America and Asia. “FTAs give Canadian goods, services, investments and businesspersons an advantage over their competitors by driving costs down and providing a more stable, transparent and predictable environment in which businesses can thrive and reach their full potential,” he comments.

Canada is the only G7 country that has FTAs with all other G7 countries. Agreements currently in force include CUSMA, the Canada–EU Comprehensive Economic and Trade Agreement (CETA), the European Free Trade Association (EFTA) with Iceland, Liechtenstein, Norway and Switzerland as well as agreements involving Chile, Colombia, Costa Rica, Honduras, Israel, Jordan, Korea, Panama, Peru and Ukraine. The Comprehensive and Progressive Agreement for Trans‑Pacific Partnership (CPTPP) is now in force between Canada, Australia, Japan, Mexico, New Zealand, Singapore and Vietnam.

Get the most out of FTAs with the TCS

FTAs make trade more accessible to SMEs, Turley explains. For example, companies that export goods may benefit from a tariff advantage that makes their products more competitive. A free online tool called the Canada Tariff Finder can help businesses determine how each FTA partner is likely to classify its goods, as well as any applicable preferential tariff rate.

Global Affairs Canada has developed pages on how CETA and CTPPP benefit SMEs. These pages provide a wealth of resources and handy guides for businesses. Companies can also contact a trade commissioner to find out how to take advantage of FTAs.

Turley cautions that preferential tariff rates under FTAs do not apply automatically, they must be claimed. The exporter or importer must provide a certification of origin that includes basic information about the product and attests to the fact that it meets the applicable rule of origin.

Canada’s FTAs help to ensure that Canadian businesses are treated in the same predictable and transparent manner as their domestic competitors in foreign countries, Turley says. In the ever‑more integrated global economy, it’s important for businesspeople to be able to cross borders to facilitate trade and investment. The removal of non‑tariff barriers “helps Canadian companies expand and thrive by ensuring seamless cross‑border travel or relocation on a temporary basis,” he points out. For example, certain FTAs facilitate access for specific categories of businesspeople, such as business visitors, intra-corporate transferees, highly skilled professionals and investors.

Many of Canada’s FTAs also include rules on preferential access to government procurement, or commit partners to internationally accepted labour, environment and intellectual property standards.

“Understanding how an FTA can help your business compete abroad may seem daunting, especially for SMEs, but there are many resources available to leverage the opportunities they unlock,” Turley says. The TCS has staff in some 160 cities worldwide, including all markets where Canada has an FTA, who can provide advice and referrals to local qualified contacts. The TCS also has funding programs that support international expansion such as CanExport, which gives Canadian SMEs financial assistance to diversify to new markets.