All modes of trade transportation were affected by the global pandemic

Trucks (or road) is Canada’s main transport mode for transporting exports abroad. This is no surprise as Canada shares a land border with the United States, a destination for three-fourths of Canadian merchandise exports. Exports by truck plummeted in April and May mainly from shutdowns of automotive production on both sides of the border, however exports have returned to normal since July. Overall, Canadian exports by road fell 9.8% from January to September 2020 year-over-year.

Exports by ship (or water), the second largest transport mode for exports, was the least impacted over this period (-9.4%) as increased exports to China since April partially mitigated lower exports to the United States.

Exports by air also recorded a moderate decline (-11.1%), largely from lower exports of precious stones and metals, machinery, and aerospace products. In contrast, exports by rail registered a major contraction of 21.0%, mainly due to lower exports of motor vehicles and parts and energy products.

Finally, “other” modes for transporting exports, mostly energy products delivered through pipelines, posted the fastest decline of 27.0%, primarily due to depressed oil prices. 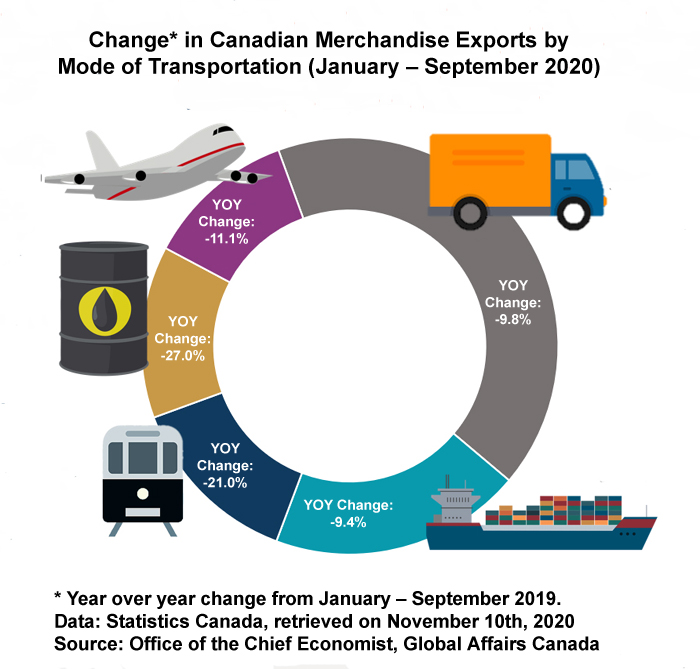 Like every aspect of the Canadian economy, exports were heavily impacted by the global pandemic in 2020, especially during the onset of the pandemic in April and May. Fortunately, as supply chains adjusted and restrictions were lifted at home and abroad, all transportation modes for Canadian exports have started recovering in recent months. However, with the resurgence in COVID-19 cases globally, the pandemic’s impact on Canada and its trading partners will depend on the magnitude of the second wave and its duration.