The TCS helps Canadian businesses level up their game at MEGAMIGS!

Every issue of CanadExport includes a list of upcoming trade shows and other business events in Canada and around the world. There's a very good reason for that. These events are an excellent opportunity for Canadian businesses to gain international exposure and accelerate their global expansion with the help of the Trade Commissioner Service (TCS).

The recently concluded MEGAMIGS 2022 is a great example of that. This event, the largest in Canada dedicated to the video‑gaming industry, took place in Montreal from October 18 to 22 — and the TCS was there to help Canadian companies connect with key players and level up their game. 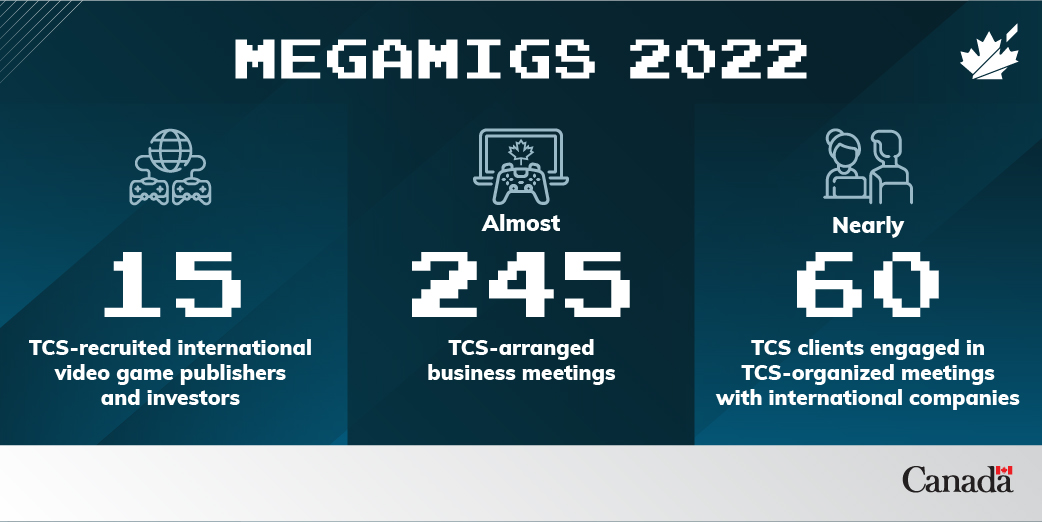 MEGAMIGS brings together hundreds of video‑game creators, publishers and investors each year. This year, the event attracted more than 675 business participants from across the globe. The TCS's contingent was led by a team from its Quebec regional office and included Trade Commissioners from several of its offices in North America and Europe.

The TCS's MEGAMIGS efforts began even before the event got started. For the first time ever, it led a series of virtual reverse pitch sessions prior to the official start of the conference. As part of these sessions, five foreign publishers from France, Italy, the Netherlands and the United States presented their needs and interests to a group of 25 to 30 Canadian participants each, most of them TCS clients. The purpose of these sessions was to better prepare clients, facilitate matchmaking and allow for early and more meaningful business‑meeting scheduling. Thanks to these sessions, 65 TCS‑organized business meetings were confirmed for MEGAMIGS before the event got underway

In the end, the TCS's business‑meeting program resulted in almost 245 meetings at the event between nearly 60 TCS clients and 15 TCS‑recruited foreign publishers and investors, as well as with participating Trade Commissioners, partner organizations and other business representatives. While Quebec‑based participants accounted for the majority of meetings, TCS clients from British Columbia, Newfoundland and Labrador, and Ontario also benefited from the program. Introductions made during these meetings are showing early and promising signs of success, with talks for two potential business deals already underway between French publishers and TCS clients. The TCS will follow those developments closely over the coming months.

WATCH: The TCS at MEGAMIGS 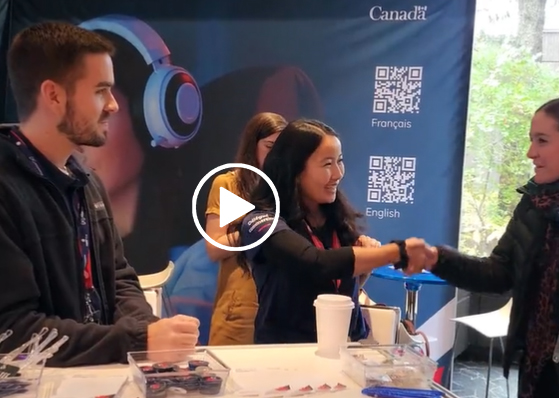 The TCS worked closely throughout the conference with the Department of Canadian Heritage, Investissement Québec International (IQI), GamePlay Space and La Guilde du jeu vidéo du Québec. That gave TCS clients access to additional opportunities and exposed them to an even larger number of international publishers and investors from countries such as France, Germany, Japan, the Netherlands, South Korea, Sweden, the United Kingdom and the U.S. In addition, the TCS and IQI worked together to organize visits to studios in Montreal for incoming foreign business delegations just before the start of MEGAMIGS. The goal of the tour was to raise awareness of the Montreal video game industry, which is among the largest in the world.

The TCS's presence at MEGAMIGS included a visit by Canada's Chief Trade Commissioner, Sara Wilshaw. In a speech to a group of more than 450 heads of gaming studios, foreign delegates, partners and other business representatives, she spoke about the important role played by the TCS's worldwide network in supporting the success of the Canadian video‑game industry internationally.

MEGAMIGS is just one of dozens of events across all sectors supported by the TCS each year. Don't miss out on an opportunity to meet with the TCS's trade experts and potential partners or customers. Visit the TCS's Trade missions and events webpage for more information and a list of upcoming events.