March 8 is International Women's Day, a day dedicated to inspiring women and celebrating their achievements. CanadExport spoke to two business women about the opportunities and challenges of working in international business. 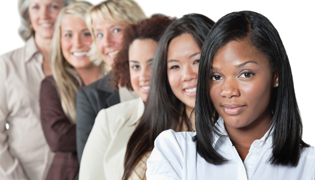 Johanne Boivin, the designer and founder of Joanel, and Jodee Prouse, CEO of Baubles, Bags and Bows, are just two among many successful women finding a place for themselves in international business. In fact, Canadian women are starting businesses at a brisk pace.

About 950,000 Canadian women were self-employed in 2011, according to Statistics Canada's Labour Force Survey. Between 2001 and 2011, the number of self-employed women climbed by 23 per cent, while the number of men grew by 14 per cent. Forty-seven per cent of small and medium-sized enterprises were entirely or partially owned by women in 2012, according to TD Economics. The report also found that women tended to stay in business longer than men are more likely to plan to expand their companies.

For Quebec-based Joanel, like for many businesses with international aspirations, success came with years of hard work building a business from the ground up. Joanel designs and sells more than 250,000 handbags a year in Canada and abroad. The company was founded in 1991 and has been increasing its export business to the United States in recent years.

"I think we have to stop saying it's only tough for women in business,” says Boivin. “I think it's not easy for men in business either. But being a woman does provide its own unique set of challenges,” she says. The company sells handbags and accessories under the labels Joanel, Ugo Santini, Mouflon and Edgar & Sooky.

For both Boivin and Prouse, balancing work and family life and developing international contacts are two of the biggest challenges.

“It can be hard to seize the moment,” says Boivin, referring to work and family commitments. “But it's a reality we can't ignore. We're also still a minority in the world as women entrepreneurs,” she says, “so we still have to prove our business credentials.”

Prouse’s company, based in Alberta, was launched in 2012. The company’s jewelry and cosmetic bags have gained prominence by being distributed to celebrities at events such as the Oscars.

Since Baubles, Bags and Bows has an entirely female staff, Prouse says she encourages women the flexibility to work when they want and as much as they want by “scheduling around their children.”

“Everything is done by women here,” says Prouse. “Every single thing from driving the forklift to creating the labels and the manufacturing.” Although being an entrepreneur is “fast-paced and demanding,” Prouse says she still manages to make time for her family and encourages her employees to do the same.

Louise Léger, Consul General of Canada in Miami, understands the pressure women in business face in balancing their careers with family demands. “Work-life balance has long been a barrier for women,” says Léger. “Not only is there a limit to how many hours women tend to be able to work, but if they choose to have children and take lots of time off to do so, there is often a price to pay. In this case reintergration can sometimes be difficult."

The Canadian Trade Commissioner Service can help female entrepreneurs not only by assisting with international market challenges, but also to develop a solid network of local contacts, according to both Prouse and Boivin.

“The hardest thing is getting access,” Prouse says, advising that women turn to the TCS for help. Boivin also credits the TCS for helping her company to develop relationships with key buyers in the U.S.

Both Prouse and Boivin say that being a female entrepreneur can be very difficult but advise other women not to give up.

“I think women need to have lots of tenacity because it can be quite discouraging at times,” says Boivin. “Sometimes you're spending more money than you're making so it takes willpower.”

But one thing is certain for both Prouse and Boivin: international markets hold many opportunities for female entrepreneurs, and they are proving that every day.