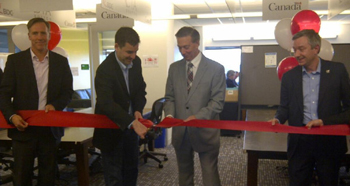 The selected companies will participate in a three-month intensive program at the Cambridge Innovation Center near the Massachusetts Institute of Technology. The program gives small to mid-sized Canadian businesses access to this key technology hub by providing workspace, advisory and connection services.

The program is modelled on similar initiatives in New York and Silicon Valley, which both include networking events, facilitated meetings with venture capitalists and mentoring by business leaders. More than 170 companies have participated in CTAs over the past four years.

“MIT Kendall Square in Cambridge where the CTA is located has the most dense concentration of companies and entrepreneurs I've ever seen. The MIT ecosystem is unparalleled in the world in terms of creation of technology,” he says. “It's absolutely incredible. In the building where we have the Accelerator there are 500 entrepreneurs and companies under the same roof.”

The area surrounding Boston is home to more than 120 colleges and universities. It is also the number two hub in the United States for venture capital, after Silicon Valley.

The nine initial participants will have many opportunities to make connections over the three months, says Weissenburger.

“We're immersing them in an environment where they can rub shoulders with many fellow entrepreneurs, venture capitalists and corporate executives,” he says. “This is hard to achieve in Canada as effectively. We simply don’t have the same concentration of entrepreneurs and corporations.”

The CTA helps to accelerate a company's entry to global markets and launching global products with sometimes unexpected results, he says.

“The whole point is to accelerate the access to contacts they need to grow their business, or in some cases to accelerate the re-positioning of their business into a successful one. It's probably better for them to figure out quickly that their business model or their undertaking is not going to succeed so they don't waste time and they can change to a more profitable path,” says Weissenburger. “It's harder to figure out in Canada because you don't get the same exposure to ideas and successful peers.”

The Boston CTA includes a structured program that is customized to the specific participating companies.

“We start by meeting with them and discussing their objectives,” says Weissenburger. “The first week we introduce them to the top contacts that they need to connect with and then for the rest of the three months we have a series of events and presentations — again, to expose them to as many companies as possible.”

Weissenburger and his team are also in the process of setting up a group of successful Canadian entrepreneurs and executives to serve as mentors for selected companies in the Boston CTA. The Silicon Valley has a similar group called C100.

“They want to give back and share their wisdom with fellow entrepreneurs from Canada,” he says.

A CTA's success is measured in both revenue growth for the Canadian companies and an increased number of jobs back in Canada, says Weissenburger.

One Canadian company that has recently achieved success through the CTA in San Francisco is Top Hat Monocle, a classroom technology program.

The company began a “fast pattern of growth” when representatives came to Silicon Valley in January 2012, says Weissenburger.

The company attracted the attention of a venture capital company and signed “major deals” with universities, he says.

The next round of applications for the Boston CTA is from April 22 to May 3.