The importance of air transport for Canadian exports

At first glance, air transport may seem of little importance to Canadian exports. After all, only 10.3% of Canadian merchandise exports, by value, were transported by air in 2012.

However, this is due to the large portion of Canadian exports transported over land to the United States and Mexico — all easily shipped by trucks and pipelines. When looking at Canada's trade with non-NAFTA markets, air transport becomes much more important. In 2012, 30.1% of Canadian merchandise exports to non-NAFTA markets were sent by air, up from 27.0% in 2007.

For some exported products, air transport is particularly vital. For example, 98% of precious stones and metals, 86.2% of scientific equipment, 81.6% of pharmaceuticals and 73.2% of electrical machinery were exported to non-NAFTA markets by air. 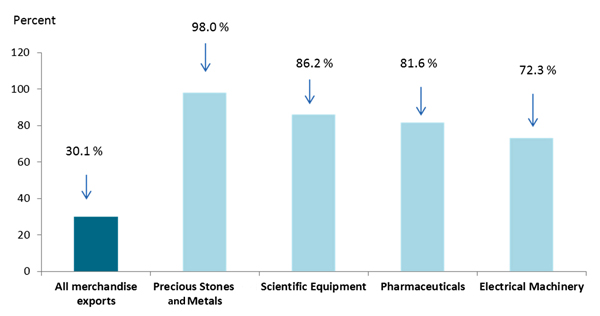 According to World Bank estimates, air transport is usually 12 to 16 times more expensive than sea transport. Therefore, goods transported by air tend to have a higher value-to-weight ratio and/or are particulalry time-sensitive. Air freight can also be used to deliver smaller and more customized orders or to compensate for delays in other supply chains — like when a production input is required immediately and must be delivered quickly to replenish inventories