From the beginning of the 1990s until the first quarter of this year, world exports increased by more than five times to reach a total of $4.5 trillion, but growth has not been constant throughout this period. 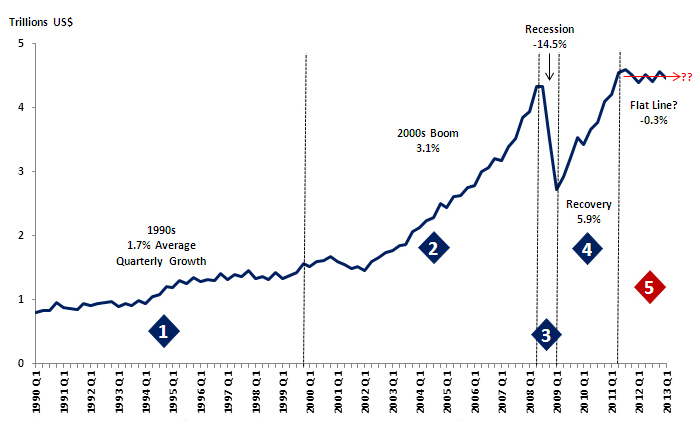 However, from the second quarter of 2011 to the first quarter of 2013, world export growth flattened. Reduced exports from advanced economies drove this less-than-stellar performance as they shrank by $134 billion (down 4.8 percent) during this period. This decrease, in turn, was largely a result of economic troubles in Europe. Internal European Union (EU) exports accounted for 60.1 percent of the change in exports from advanced economies (down $100.0 billion). As the EU’s gross domestic product (GDP) shrank by 0.8 percent in the fifth period, this decrease in exports is not surprising.

Going forward, it is expected that world export growth will begin to increase once the EU recovery gains steam. The recent 0.3 percent increase in the EU’s second quarter GDP is reason for optimism, but output is still far below its pre-crisis peak. Moreover, unemployment in the EU continues to worsen — most recently increasing to a discouraging 11 percent.

Although world export growth has recently flat-lined, much of this slowdown is the result of a poor economic climate in Europe. When Europe recovers, it is expected that world export growth will pick up pace — but only time will tell whether growth levels will reach the highs of the early 2000s.