Flying high-with their feet on the ground

When they took over Arconas Corp. just over a decade ago, Pablo  Reich and Dan Nussbaum found a niche for the commercial furniture company making airport seating, a specialty market where they saw sky-high potential. 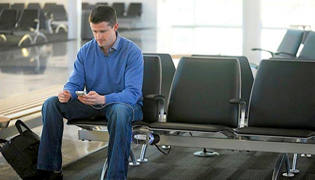 They began with airports across Canada and quickly moved into the U.S., outfitting passenger terminals from Chicago O’Hare International Airport to others in Los Angeles, Atlanta, Boston and beyond with distinctively designed banks of seats. Next, they found international markets in airports from Abu Dhabi to Puerto Vallarta and Greenland, and expanded into making modular seating for institutional settings such as courthouses, hospitals and corporate offices at home and abroad.

Today Reich and Nussbaum are sitting pretty, with their Mississauga company doing $15 million in annual sales. Most road warriors have lounged on or plugged their electronic devices into a power module in one of Arconas’s seating consoles in more than 200 airports around the world. The company has also installed its durable, long-lasting seats in places such as the brand-new Kai Tak Cruise Terminal in Hong Kong, and has a contract to supply public seating to the U.S. Department of Homeland Security.

Such rapid global success has come through focusing on a narrow product line and selling it through a network of distributors “on the ground,” says Reich, the company’s executive vice-president.

“Internationally, it’s highly unlikely we would get any business done unless we had some local representation,” he explains, noting that after-sales service and customer support are critical in his business. “We would have to hire a lot of people and put them in airplanes every week. That’s not the right way to do it.”

The local touch has instead come through the Canadian Trade Commissioner Service, which provides critical market intelligence, exposure and distribution contacts to help the company go after work in new airport developments and renovations around the world.

“We quite value the Trade Commissioner Service, because it provides a lot of local knowledge and support,” says Nussbaum, the company’s president. “It does the job of opening doors and raising the profile of the company.”

The relationship with the TCS began in Chicago, where Arconas was an exhibitor at NeoCon, North America’s largest contract furniture trade show, which attracts more than 40,000 participants each year. The TCS in Chicago holds a special cross-border networking event at the show, introducing Canadian exhibitors to potential local or U.S. buyers, architects, specifiers and facilities managers.

Getting on the inside track

Keep it narrow—Stick to a maximum of three markets, Rosen says, so you can really focus on potential clients and have the internal resources available for follow-up.

Do some advance work—"Before you get on a plane," carry out due diligence, using resources such as the TCS trade associates, to learn all about your chosen markets.

Dig around—Sources of intelligence about upcoming projects are everywhere. You can even work in tandem with companies that make complementary products to get market insight. Identify the decision makers/specifiers on a given project so that when it goes to bid, your product attributes have been given consideration in the pre-bid documents.

Be patient—It takes time to get to know the right people, identify their needs and convince them that you're the right supplier.

Relationships are key—"You're not on the tip of anyone's tongue," Rosen says, so keep in touch with clients. Perhaps tour them through your factory back in Canada.

Ann F. Rosen, a trade commissioner at Canada’s consulate general in Chicago, says the events “draw attention to Canada’s leadership in the industry,” adding that the 50 to 60 Canadian exhibitors who come to NeoCon each year are “key players in the field.”

The TCS “gets the right players to the table,” she says. “We make the introductions. The idea is to match Canada’s core competencies with local buyers.”

She says that Reich and Nussbaum have especially succeeded in this competitive industry by finding a niche market and a customized product where the margins are greater, as opposed to selling commodity products. Airports especially look for uniquely designed furniture because it “represents the city and the vision of the city,” she notes, and is often the first impression that visitors get.

It’s critical for companies such as Arconas to have local intelligence as well as sales and distribution contacts in the area, Rosen says, because they must get in on the early stages of what is a rather long sales cycle. Often with infrastructure projects, a particular designer or vendor begins to be considered as a project is being conceived.

“It’s best to get intel and speak with the decision-makers early,” Rosen says. “If they’re aware of your product’s characteristics or uniqueness, then they can write it into the bid specs.”

Arconas’s attendance at NeoCon, with the assistance of the TCS-led cross-border initiative, has led to a number of projects for the company, Reich reports. For example, the City of Chicago Department of Aviation has signed a contract making it the approved vendor of seating for O’Hare and Chicago Midway International Airport.

“It was a huge thing for us to get into Chicago,” Nussbaum recalls, adding that O’Hare “is so iconic,” with 67 million passengers going through it each year, among the world’s busiest airports.

He says that Arconas, a 40-year-old family company, has especially benefitted from focusing on airport seating, which in the past was the territory of two huge U.S. companies that were more focused on the larger contract furniture sector. He estimates that the airport seating market worldwide generates $70 to $100 million annually, while the contract furniture business in North America alone amounts to some $12 billion a year.

To serve the airport market, Arconas has 25 independent sales representatives in the U.S. and a network of 10 international distributors, in addition to 45 staff at its Mississauga headquarters, split between manufacturing and administration.

It contracts award-winning Canadian designers to create its comfortable, injection-molded seating, such as the classic Flyaway line with its high backs and thick cushions, Arconas’s most popular model. It has also incorporated innovations and sustainable features into its seats, for instance using foam made from soybeans to replace up to 20 per cent of the petroleum content of its cushions.

The products are popular with O’Hare, which has a renowned environmental program, notes Rosen. It has green roofs, produces honey from beehives around its property and has started using goats, sheep, llamas and wild burros to clear brush in its remote airfields. The Chicago Department of Aviation hosts the annual Airports Going Green conference on sustainability, which Arconas has attended.

As the company has expanded internationally, it’s become acquainted with the TCS all over the world, says Nussbaum, working with trade commissioners in Belgium, Ukraine, Hong Kong, Singapore, Brazil and Peru. The service refers the company to potential local distributors and keeps it informed of large infrastructure projects on the horizon.

Reich says that Arconas will join a trade mission to Southeast Asia in November, sponsored by the TCS and the Government of Ontario, which is specifically focused on airports in The Philippines and Indonesia.

The company recently hired an export sales manager to help it identify business opportunities, working closely with the TCS to get additional insight, advice and local references, he adds. “We always appreciate having someone local supporting and promoting our Canadian business. In other countries, a referral, an endorsement or an introduction is always well-received.”

Nussbaum says the company is already the leading maker of airport seating in North America, but hopes to hold that place in the world someday soon. “We’ve had a lot of success, but we have even more opportunities yet to come,” he adds.