Reacting to the changing landscape of international import demand

The share of global production accounted for by emerging economies is increasing rapidly. Using GDP data adjusted for purchasing power parity (PPP), a method which attempts to account for relative price differences between countries, the gap between advanced and emerging markets GDP share has shrunk 25% over the last dozen years. And the shift of the majority share in world GDP from advanced economies to emerging economies is predicted by the IMF to occur this year. 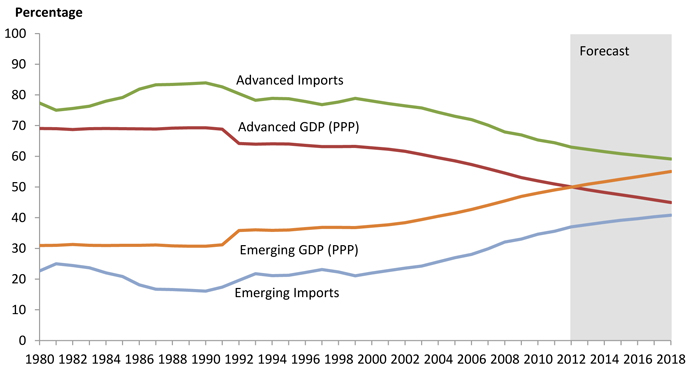 Correspondingly, emerging economies are now a destination for nearly 40% of global merchandise imports; this marks a 15 percentage point increase over the last decade.

In the near term, Canadian firms can gain by bolstering the exports of primary and intermediate products, which fuel the developing production chains in emerging economies. For example, during the last decade, Canadian energy exports to emerging markets have grown at an annual average of 27%. Additionally, Canadian industry has an opportunity to capitalize on nascent industries in emerging economies through the export of technical expertise, often in the form of exports of professional, technical and commercial services, an area of comparative advantage for Canada given our highly skilled labour force.