The stock of Canadian Direct Investment Abroad (CDIA) has increased dramatically over the past quarter century1. This expanding stock of investment indicates that Canadian firms are becoming more globaly active, taking advantage of liberalization in trade and investment, and seizing opportunities in growing foreign markets.

CDIA by Destination and Industry (2012) 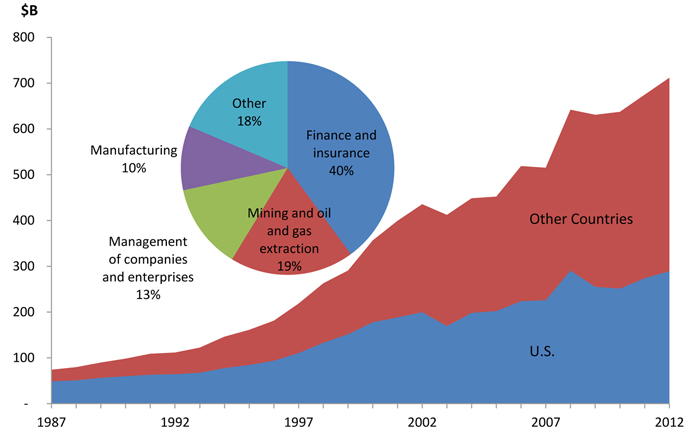 Unsurprisingly, the top destination for CDIA, by a significant margin, has historically been the United States. Although this remains true today, Canada has been slowly diversifying its direct investment destinations. Canada’s share of CDIA to the United States has been falling over the past 25 years, decreasing from 66% to 41% between 1987 and 2012. One potential explanation is that NAFTA has contributed to this downward trend, as direct investment is no longer necessary for Canadian firms to gain expanded access to the U.S. market.

At the same time, Canada has diversified its investments to a variety of countries. In 1987, 95% of CDIA was in 17 countries. By 2012, this number had doubled. Although the share of annual CDIA for many non-U.S. regions has grown in the past 25 years, some have increased more than others. Europe was one of the primary regions to which CDIA was redirected, with its share increasing from 17% to 26%, surpassing the 25% in 2001. The Caribbean is a significant destination as well – CDIA increased from 7% to 17% between 1987 and 2012. However, the majority of CDIA in this region is in countries often considered to be tax havens, and is generally thought to be an interim destination for investment rather than a final destination.

Although the stock of CDIA is now dispersed among a larger number of destinations, CDIA remains concentrated in the same sectors as 10 years ago. In both 2002 and 2012, just over 80% of CDIA was in four of 15 industries : finance and insurance, mining and oil and gas extraction, management of companies and enterprises, and manufacturing. The finance and insurance sector was the destination for the highest amount in both years, with 37% of CDIA in 2002 and 40% in 2012. While the top industries have not changed in the past 10 years, the distribution of CDIA between these sectors has shifted. Both mining and oil and gas extraction and management of companies and enterprises saw their shares increase by 6 percentage points, rising to 19% and 13% respectively. The manufacturing sector, conversely, dropped from the second to fourth with its share of CDIA significantly falling from 23% in 2002 to 10% in 2012.

The stock of Canadian Direct Investment Abroad (CDIA) and the diversity of destinations to which it is directed have both expanded tremendously over the past 25 years. While the primary sectors to which CDIA is directed have not changed over the past decade, the distribution between these top sectors has shifted. With the ongoing push to diversify Canada’s trade partners, it is expected that the diversification of destinations for CDIA will also continue.

1 CDIA refers to investments in one country involving a long-term relationship, reflecting a lasting interest and a significant influence on the management of an enterprise residing in another country.