Riding a packed city bus through the streets of Shanghai on a visit to China eight years ago, Wendy Weir witnessed a moment that would send her on a journey into the world of international business. 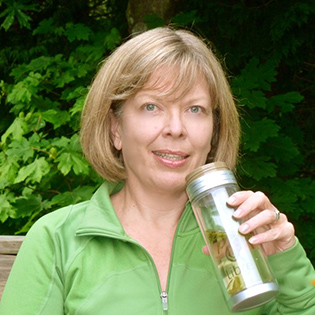 As the bus came to a stop at a red light, Weir, a marketing consultant from Gibsons, B.C., watched the driver pull out a glass jar full of steaming hot tea. He raised it to his lips and took a long drink of the leafy brew, seemingly blocking out the jostling passengers, frenzied crowds and busy traffic all around him.

“It was a tea moment,” she says, recalling the look of pleasure, calm and satisfaction she could see on the driver’s face. “It was like all of us—that bus full of people—had gone away.”

Weir saw even more than that: an opportunity to market a portable cup for loose-leaf tea that would give others in our on-the-go culture their own “tea moments.”

She found models for such cups almost everywhere she went on her tour through the gardens and temples of China. She delighted in the different varieties that people there carried, from simple glass containers (the Shanghai bus driver’s looked “remarkably like a Bick’s Pickle jar,” she says,) to elaborate, multi-part vessels.

Returning home, she got to work perfecting a durable, re-usable, thermal and stylish travel beverage container. She found a unique model—a double-walled version with a glass interior and a poly exterior—and then with the manufacturer worked to add a filter mechanism that she had found, in order “to strain out tea leaves for budding North American loose-tea lovers.”

The process was far outside of Weir’s experience as CEO and founder of Energetic Marketing, a consultancy in the energy conservation field. But within two years she had started a new company, called Libre Tea, and was beginning to sell the unique cups through specialty tea shops and health-food retailers on the West Coast.

Over the last six years, Weir, now CEO of Libre Tea developed a market throughout Canada and the United States, targeting yoga studios and cafés, passing the cumulative $1-million sales mark in the middle of 2013. She expanded to the United Kingdom last fall and continues to look at new markets.

In the early stages of the process, Weir says she got “an awful lot of good help” from a range of organizations in B.C., as well as from peer mentoring and certification groups. “It’s very important to have resources when you’re starting a business,” she says.

When she was thinking of expanding her market internationally, she contacted the Canadian Trade Commissioner Service, where the Business Women in International Trade (BWIT) program supports Canadian women entrepreneurs by representing and advocating their commercial interests at home and abroad.

BWIT helps women “as they travel along the path to export success,” says Zoe Hawa, the trade commissioner for the BWIT program. It connects export-ready and export-active Canadian business women with trade commissioners around the world, for example, as well as organizing trade missions for Canadian business women and offering policy advice on women’s economic empowerment to international forums.

Hawa says that the program facilitates access to support networks, government resources, events and services available to Canadian business women. It partners with key stakeholders to leverage supplier diversity procurement opportunities at Fortune 500 companies, and provides targeted support, market intelligence and contacts via the TCS network in more than 150 embassies and consulates world-wide.

BWIT also develops and maintains communications materials and tools such as the Canadian Business Women in International Trade LinkedIn Group, says Miriam Lopez-Arbour, who is part of the BWIT team and oversees the group. Set up in 2012 as one of eight TCS LinkedIn sub-groups, the BWIT LinkedIn Group is a forum for networking and exchanging approaches to doing business abroad, she says. There are currently more than 950 members of the group, including trade commissioners, government partners, trade associations, academics, researchers and individuals, all interested in international commerce.

“The group provides today’s professional women with information on leadership development opportunities, new ways of thinking and vital connections to help them advance,” Lopez-Arbour says, adding that both men and women are encouraged to sign up. “You can share insights, quickly find answers to business questions, exchange contacts, identify synergies, find a mentor and diversify your network.”

Through the BWIT LinkedIn group, Weir found lots of useful answers from other members about issues such as taxes, customs processes and other exporting matters.

BWIT also put her in touch with TCS contacts at the Vancouver Regional Office and at the Canadian High Commission in the U.K., who gave her a better sense of the market on the ground there. They had suggestions such as participating in health-related trade shows and looking for specialty markets in the country.

Libre Tea’s cups sold out at a major yoga trade show in England in October—“For a product that no one had ever seen before we were pretty thrilled,” she says—and they have been picked up for distribution by Planet Organic, the largest-grossing health food chain in the U.K.

The product is marketed as being environmentally friendly, economical and healthy. It is especially being pitched to yoga enthusiasts, a wide market that is growing and is “not constrained by geography or culture,” says Weir, who chose the name “Libre” to show how drinking tea offers freedom.

“We’re all going much too fast; we lose ourselves,” she explains. “The tea glass is a way to stop and relax and have a little ‘tea moment.’”

She says that the message especially appeals to women, who are juggling busy lives and are not able to take time for themselves. Some 90 per cent of Libre Tea’s 7,200 Facebook fans are women, she says, adding that women entrepreneurs can be equally hesitant about going after what they need.

“Women sometimes don’t like to trouble people, so they don’t ask as much,” she says, noting that both women and men who are contemplating going into the marketplace are often “very fearful,” so they never really get started.

“It’s knowing how to ask the right questions and asking them of the right people,” she says, suggesting that women in particular, once they get going, “are awfully good at collaborating.”

Lopez-Arbour points out that the BWIT LinkedIn Group “is especially a perfect forum for women to share and to learn from each other” and to get details on upcoming conferences and trade missions as well as grants, awards and supplier diversity programs. “Everyone is busy, and it’s an easy way of getting timely, useful information,” she says.

Weir reports that sales of her cups in the U.K. have gone well, with the distributor already selling through the first shipment. She is looking into more markets, such as Australia, Japan and some countries in Europe, and has plans to bring out the cups with new designs, colours and special themes.

She advises women who are considering going into the export field to network, to take advantage of numerous services and resources available, such as the BWIT program, and to research their market.

“You really have to know what value you’re offering,” she says. “And you have to understand which segment of the market is going to value what you have.”