Twin brothers stand out in more ways than one

Trade fairs are important places for small and medium-sized companies to connect with clients and customers, meet potential partners, sign deals and showcase their goods and services to a wide audience.

Arriving at the Mobile World Congress (MWC) in Barcelona in late February, Chris and David Hobbs were looking to do all that and more. Yet for the twin brothers and their Vancouver mobile development company, Two Tall Totems, it wasn’t going to be easy. 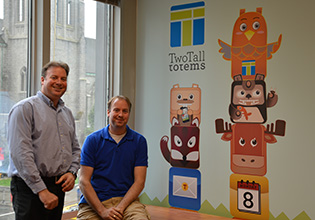 The Hobbses were among more than 86,000 visitors from more than 200 countries participating in MWC, which is by far the largest annual show for wireless technologies in the world. Their company, with just 15 programmers and designers, was dwarfed by the giant telecommunications carriers and system integrators they were there to see. And thanks to an airline strike when they connected in Frankfurt, Germany, they landed in Barcelona without Chris’s luggage, which contained not just his clothes but a good deal of technical equipment such as iPads, an Apple TV and a router necessary to present their new collaborative screen technology.

Yet through a combination of persistence and good timing, as well as the help of the Canadian Trade Commissioner Service (TCS), the brothers left the show encouraged that their start-up is on the verge of a major sale, especially after meetings with such big names as Google, Samsung, LG, Orange and Telefónica.

“It was an amazing experience,” says Chris, the president of Two Tall Totems, which started three years ago and largely focuses on producing mobile apps for Apple and android devices. Adds David, the company’s director of development: “I think they’re going to remember us.”

The brothers are memorable, at 6 feet 4 iinches in height and nearly identical, which of course meant that they could share the clothes they had in Barcelona. Their playful company name is meant to appeal to business people in what can be an “overly technical” environment.

The product they are developing, called ThinkTogether, is a software application that allows for multi-layered collaboration, for instance in the classroom or workplace. As many as a million users are able to be connected and share materials in real time, using a variety of devices. The brothers say the technology, which is awaiting a patent, will “democratize collaboration” and become the next form of social media, noting that it could be incorporated into an operating system.

The successful appearance of Two Tall Totems at MWC underscores the strength of the extensive network of trade commissioners in offering services to Canadian companies.

Indeed, the journey began a year ago, when Two Tall Totems was referred by the National Research Council’s Industrial Research Assistance Program to Laura Clarke, a trade commissioner in Vancouver. Clarke, the ICT sector officer, met with Chris Hobbs, heard about the company’s innovative solution and began putting Two Tall Totems in touch with TCS staff in markets such as China and the United States, where large telecom companies might be interested in the application.

The TCS team helps such companies prepare their international pitches and offers feedback for their efforts, she says. “It’s very much a dynamic, coordinated effort.”

She says that Vancouver especially has an “excellent ICT ecosystem,” and even the smallest companies can have a big impact on the Canadian economy.

“If they’ve got a good business plan, a unique solution and a capacity for and a commitment to internationalism, then size doesn’t matter,” she says. “They just need a little help to get it out there.”

Such help is especially critical at the Mobile World Congress, says Maximo Hurtado, the trade commissioner in Madrid responsible for the ICT sector and one of the organizers of Canada’s presence at the huge fair.

The fair is especially valuable as there are a number of CEOs and senior managers of major multinationals who attend, although many of them have “pre-filled agendas,” Hurtado cautions. “It’s hard to get five minutes…You need to find ways to convince them to meet with our Canadian clients.”

The TCS team offers services such as arranging business-to-business meetings, organizing networking events, and helping with myriad technical problems that arise. “I lose a lot of weight. You have to be running all the time,” says Hurtado.

One of the most important events organized by the trade commissioners happens even before the fair begins: a pre-fair session where select participants practice the messages they will give to potential clients. Hurtado says the goal is to help them hone and tighten their pitches, keeping them to just a few minutes.

“No one’s going to be interested to hear that your company was started by your grandfather,” he explains. “They want to know what you do, what makes that unique and how you can help them make money. It also helps trade commissioners to better understand their clients.”

The TCS team “went out of their way to help every single Canadian company there,” says Chris. “On a dime, no matter how busy they were, they would do everything we asked.”

While he and his brother are “capable of walking up to someone and making a pitch,” he says, “it was nice to have the help of the TCS and to know what to expect.” Being introduced by the trade commissioners offered validation and opened doors, Chris explains. “They say, ‘We are the Government of Canada.’ You can’t ignore that fact. It’s a brand, and that throws a lot of credibility to you.”

Hurtado says it is helpful that the Hobbs brothers are “passionate about what they do,” as well as dynamic people who stand out. They were also able to go ahead and present their product successfully with the few iPads and other equipment salvaged from David’s luggage.

Chris, meanwhile, says that Hurtado’s “intensity and determination got us in front of Google,” which had earlier turned down a request by Two Tall Totems for a meeting. “He’s just a rock star when it comes to meeting-and-greeting and knowing who people are.”

He also gave the brothers the courage to approach other significant companies, says David, especially because he understands the culture and how to make the best approach.

Hurtado says that following such a trade fair, it’s critical for companies to follow up with the firms they met and to keep the TCS in the loop, something that Two Tall Totems did via email even before they had arrived back in Canada.

“They’re doing all the right things,” he says.

The Hobbses say they are “disciplined” in terms of keeping up with the contacts they made at MWC. “We’ve been very aggressive,” says David, adding that the company is looking for distribution partners and investors, and expects to launch its technology in the third quarter of this year.

“Barcelona for us was recognition that we’re on the right path,” he says. Adds Chris: “There’s a lot of excitement about this product. We’re ready to run with it.”