Canada’s exporters are looking forward to reaping the benefits of the new free trade agreement with South Korea, which levels the playing field with other countries and opens the door to the lucrative Asia-Pacific market for Canadian businesses.

The Canada-Korea Free Trade Agreement (CKFTA), Canada’s first such agreement with an Asian market, provides unprecedented new access for Canadians to the world’s 15th-largest economy and the fourth-largest economy in Asia. It puts Canada on a competitive footing with South Korea’s trading partners that have similar agreements, such as the United States and the European Union, and will make South Korea a larger gateway into this dynamic region, say Canadian groups and companies that sell goods and services there. 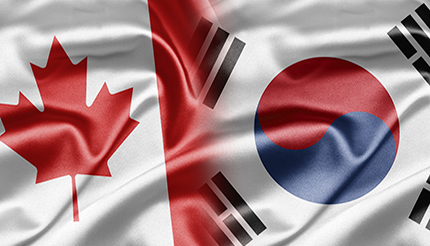 “This agreement is imperative to restoring a level playing field for Canadian firms in the South Korean market,” says Jim Quick, president and CEO of the Aerospace Industries Association of Canada, noting that the CKFTA is especially important given the considerable growth that the aerospace industry is expected to see in the Asia-Pacific region in the coming years. “We congratulate the government on this achievement, and thank them for their ongoing commitment to boosting Canadian competitiveness in international markets.”

The agreement is projected to boost Canada’s economy by $1.7 billion and increase Canadian exports to South Korea by 32 percent. It will benefit a wide range of sectors, including industrial goods such as chemicals and plastics, information and communications technology, aerospace, metals and minerals, as well as agricultural and agri-food products, wine and spirits, fish and seafood, forestry and value-added wood products. With respect to the automotive sector, the CKFTA features robust outcomes across all areas, including tariffs, non-tariff issues, standards-related measures, specialized dispute settlement procedures and safeguard provisions to protect against import surges.

Ian Burney, Assistant Deputy Minister for trade agreements and negotiations at Foreign Affairs, Trade and Development Canada (DFATD), says the agreement eliminates tariffs and reduces non-tariff measures that “hinder market access for Canadian exporters and investors in South Korea, bringing transparency and predictability to the business environment.” When it is fully implemented, South Korea will remove duties on more than 99 percent of its imports from Canada, he says, adding that it will also benefit Canada’s services sector and strengthen opportunities and protection for two-way investment.

Burney says that South Korea is already a key gateway to the wider Asia-Pacific region and is geographically situated in an ideal location to increasingly facilitate trade with the rest of sia.

“The agreement will provide Canadians with access to new markets, customers and partnerships, creating stronger supply and production chains,” he says. “Canadian companies of all sizes will be able to use South Korea as a strategic base for expanding their presence throughout the Asia-Pacific region, further increasing their global competiveness.”

The CKFTA is expected to significantly improve market access opportunities for Canada’s industrial sector. In 2012, Canada’s exports of industrial goods to South Korea were worth $2.6 billion, representing 70 percent of Canada’s total exports to the country.

Quick says the export-intensive aerospace industry was especially disadvantaged by the recent free trade agreements that South Korea signed with the U.S. and the EU. With tariffs of 8 percent on products such as turbo propellers, turbo jet and propeller parts, he notes, “Canadian companies saw their exports to South Korea drop by more than 80 percent, from $180 million in 2011 to just $35 million in 2012.” He hopes the situation will be rectified with the new agreement.

“We feel confident we will regain what we’ve lost and build on that,” he says, adding that the Canadian Trade Commissioner Service will especially help the industry to get back on a positive footing in South Korea. “They’re one of the best assets we have.”

The Asia-Pacific region is expected to be a major driver of international aerospace growth, he adds. Out of more than $4.5 trillion in new work forecast over the next 20 years, more than 37 percent of the demand for new aircraft is expected to come from there.

Quick says that having preferential treatment in South Korea allows Canadian companies “to be a major player in the region,” with a physical presence that will lead to further opportunities. Again he says the assistance of Canada’s trade commissioners is critical. “The TCS team in Asia Pacific is very knowledgeable about their local market and they know how to connect.”

The CKFTA will also be helpful to Canada’s commercial fishing industry. South Korea has an average tariff in the sector of 16.5 percent, with tariff peaks as high as 47 percent. Nearly 70 percent of fish and seafood tariff lines will be duty-free within five years of the agreement’s entry into force, and all remaining South Korean tariffs on fish and seafood products will be eliminated within 12 years.

Much of the Canadian seafood exported to South Korea comes from British Columbia, says Christina Burridge, executive director of the B.C. Seafood Alliance. Indeed, seafood is the province’s most valuable agri-food export commodity, she says, worth about $1 billion annually.

“The CKFTA is good for our industry, great for the West Coast and for all Canadians,” says Burridge. She notes that many of the seafood species produced in Canada sell well in Asia, and there is “lots of potential” in South Korea. “This is a market that has some money and it likes seafood.”

Rob Morley, vice-president of production and corporate development for the Canadian Fishing Co., says that South Korea is a good market for salmon, herring roe and ground fish species. “There are definite opportunities there,” hesays, noting that the CKFTA will help Canada to compete with seafood companies in Alaska andbeyond.

The company, the largest West Coast fishing and fish processing business, based in Vancouver, has 2,000 employees at the peak of the fishing season. Between 60 and 70 percent of its production is exported to 27 different countries, Morley says. “You always want to expand your market and look for new customers, especially those who can afford to pay more for what you’re producing.”

Patti Miller, president of the Canola Council of Canada, says that canola exports could significantly increase—even double—under the CKFTA. South Korea is an important market for canola oil, with imports from Canada averaging $62 million a year from 2010 to 2012.

“This agreement is good for the whole canola value chain,” Miller says, noting that both canola and canola oil have faced unstable and discriminatory tariffs in South Korea. Canola will have immediate duty-free access when the CKFTA comes into force, and refined and crude canola oil tariffs will be eliminated within three and seven years respectively.

“A more open trade environment contributes to economic growth and investment. It’s good for canola and good for Canada,” Miller says. “We congratulate the Government of Canada for taking this step forward.”

She says that South Korea is a promising market because it has limited land for farming and is highly dependent on food imports. With its light taste, high smoke-point and heart-healthy attributes, canola oil is well-suited to consumer preferences in Asia.

The agreement will also provide a significant advantage for Canadian wood and forestry producers and exporters looking to expand market opportunities in South Korea. Canada exported $503.8-million worth of wood and forestry products to South Korea in 2012, representing 13.8 percent of Canada’s total exports to that country. Under the CKFTA, all South Korean tariffs on forestry and value-added wood products will be eliminated, where current duties average 2.9 percent, with tariff peaks of up to 10 percent.

With Canada’s current capacity to export to Asian markets, and the removal of South Korea’s tariffs on these products, the CKFTA will provide the Canadian forestry sector with new market access, offering diversification and export opportunities to Canadian industry.

Among the agreement’s many attributes, it improves access to South Korea’s government procurement market and includes enhanced temporary entry commitments, which will facilitate the movement of business representatives between Canada and South Korea. This will result in preferential access for business visitors, traders, investors and professionals such as architects and engineers.

Burney says the agreement also helps Canada’s companies by locking in fair and predictable conditions for business and ensures non-discriminatory treatment, meaning that each country is obliged to treat the other’s companies and goods the same way it treats its own.

Canadian companies will benefit from provisions that simplify the process of clearing goods through South Korean customs, such as clear and transparent origin procedures, the promotion of border processes that expedite the release of goods, and an impartial and transparent system for addressing complaints about customs rulings and decisions.

Canadian service providers will benefit from more transparent and predictable access to the South Korean services market, in areas including professional services (such as foreign legal consultancy services, commercial education and training, and research and development), environmental services, business services, and services incidental to manufacturing, mining and wholesale trade.

Burney says that the agreement also reduces non-tariff barriers, ensuring that market access gains are not undermined by a lack of transparency or unjustified trade restrictions. Strong disciplines on non-tariff measures are backed by fast and effective dispute settlement provisions, he adds.