The Amazing Business Race:
The final ocean crossing out of New York

November 15, 2013:
Out of Africa and into the dreaded southern ocean

The Clipper Round the World Yacht Race fleet left New York to start Race 14 to Derry-Londonderry, Northern Ireland, in the final leg of this great 40,000 mile challenge. It’s hard to believe the race is almost over. This may be the last big leg of the race but for PRAXES, this is really just the beginning of some excellent business opportunities.

PRAXES CEO Susan Helliwell and Medical Director Dr. John Ross were in New York to see the crews and connect with the skippers they trained last summer.

We also have great news about our business development efforts in Jamaica. The Canadian Trade Commissioner Service team in Jamaica — Celia Marie Champagnie and Rick McElrea — created quite a stir for PRAXES while the fleet was in Jamaica recently. They have been making connections for us with leading players on the telemedicine scene in the Carribean. They are in the process of facilitating business development discussions on an on-going basis.

Things are also sailing along on the sponsorship front. Of course, any sponsorship effort needs a PR effort to go along with it. If we want increased awareness, media coverage is a must. Here is an example of a great article, which we will ask our PR agency to leverage perhaps into a national story. The quotes from the skipper of Great Britain are particularly powerful for us, and we will use them in our marketing efforts. Have a look — this is the sort of attention that even a small company can secure. 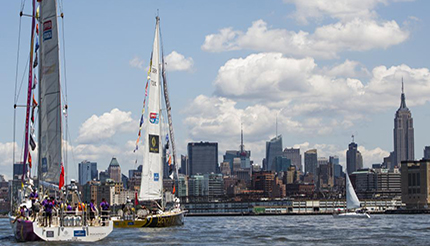 A U.K. media company that attended race start festivities with us, is helping us strategize about global marine markets. We will be meeting with them in London at race end and also with other sponsors and potential marine customers. After all, the key role of sponsorship is to attract the attention of potential customers, and then call on them!

Now that we have established solid relationships with Trade Commissioners in many cities, we plan to leverage their on-the-ground knowledge to continue to help us gather key market data and get “insider advice” about potential partners and opportunities.

By the way, Eric Holden, the only Canadian skipper in the Round the World Clipper Race, saw more honours last week. He now leads the race overall in his yacht Hernri Lloyd, and has been awarded sailor of the month by Sail Canada in 3 of the last 12 months.

Stay tuned for our last blog entry in the July 18 edition of CanadExport.