India's challenge:
How to conquer the chaos

When a new international terminal opened at Mumbai’s Chhatrapati Shivaji International Airport in February, it was a proud moment for Formglas Products Ltd., the Toronto company that made the massive ceiling that stretches over its main departure hall and retail corridor.

At half a million square feet, the ceiling is the largest feature in the world ever made of glass fibre reinforced gypsum. Technically complex as well as aesthetically breathtaking, it includes more than 4,000 huge molded coffers, interspersed with columns and perforated with skylights as far as the eye can see. 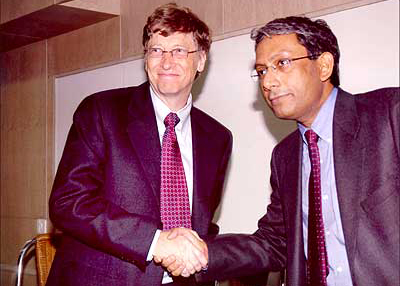 For Formglas, the challenge of the project wasn’t only its sheer scale and the physical limits of the materials and processes required to manufacture and install the unique ceiling, says Richard Samson, the company’s senior vice-president. The fact that the job was in India also meant dealing with time delays, intense price competition, layers of bureaucracy, creaking infrastructure and daunting cultural differences.

“It’s a tough place to work,” says Samson, noting that the result of Formglas’s first major job in the country was nonetheless an “iconic project” and a triumph for the company, which custom-casts architectural features out of gypsum, cement and fibreglass. “India takes time and it takes money.”

It’s a lament that Ravi Venkatesan knows well. In his book Conquering the Chaos, the former chairman of Cummins Inc. and Microsoft Corp. in India enumerates various “minuses” of doing business in the country, and offers strategies for companies looking to succeed there.

“You have to show up, deal with the chaos and thrive in it,” says Venkatesan, adding that there are many possibilities for small- and medium-sized companies looking to do business in India.

Sara Wilshaw, who heads up Canada’s commercial program for India, as the Minister (Commercial) and senior trade commissioner at the Canadian High Commission in New Delhi, says there is growing interest among Canadian firms in the “unique” Indian market. “At the same time, there are challenges to any company doing business here.”

More than 600 Canadian companies are currently active in the country, almost three times the number when Wilshaw came to India three years ago. Trade between the two countries grew by more than 11 percent in 2013, reaching $5.8 billion, and it has increased by 40 percent since 2010.

“We are certainly seeing growing traction for Canadian companies here, and we expect more to come,” she says, noting that it typically takes firms two to three years to start seeing commercial results in India, which ranks 134th out of 189 economies in the World Bank’s 2014 Ease of Doing Business rankings. “Companies need to have a long-term plan and an India-specific strategy.”

One of the most significant difficulties to deal with in India is intense price sensitivity, Venkatesan says. Companies should focus on adding value, reducing costs, finding niche markets and going for “giant volume,” he suggests, which especially means designing products and services for the country’s burgeoning middle class. “Companies that compete on price alone fail.”

In India and much of that part of the world, bargaining is “part of the tradition,” Samson says, and companies must simply be prepared to trim their prices somewhat. “As you go East, the negotiations become a lot more insistent, if you will…It’s a little bit silly, you know what is coming, and you have to have something in hand to be able to give.”

Wilshaw notes that customs duties can be high for many products, so SMEs may consider local manufacturing to lower costs. Additionally, packaging and product size are often different in India, which means selling items in smaller quantities at a higher price per unit. Companies can also alter a product to lower its price, or go after a market that is more exclusive.

“Having a unique or disruptive technology can allow a company to command a premium,” she says. “Taking the time to get to know the market and consumer preferences is key.”

Peter Sutherland, a former Canadian high commissioner to India who is now president and CEO of the Canada-India Business Council, says that companies should be prepared for “haggling” and know their bottom lines. While margins are slim, it’s possible to win if a product or service is “something the Indians need and aren’t doing already” and it can be marketed widely.

Corruption is also a factor; India ranks 94th out of 177 countries on Transparency International’s 2013 Corruption Perception Index. Sutherland says that companies should maintain a reputation for “playing by the rules,” and “just say no” if they are asked to pay bribes.

“You have no assurance by paying someone that you’ll get what you expected, and that often won’t be the end of it,” he warns. “Others thereafter will expect similar favours.”

Companies might consider avoiding sectors where corruption is more pervasive, such as “any business where the government controls the contracts or access to natural resources,” Venkatesan suggests. “You can’t succeed. Don’t even try.”

There are different “shades” involved in corruption, from straight bribes to “speed money” that facilitates the issuing of permits or clearances at customs, he says. Companies that succumb to making such payments could regret it, he points out. “It is a cancer that will spread through your whole organization.”

Venkatesan’s strategy in business has been to say that he can’t pay bribes or he will be fired. At an organizational level, while a company may lose business or approvals may take longer, it’s important to develop a reputation for being ethical and incorruptible, he advises. “From the CEO to the newest front-line employee, you have to be aligned around how you’re going to do business.”

To avoid corruption, due diligence is critical in evaluating opportunities, Wilshaw says. “This involves going beyond the balance sheet and looking carefully at reputation and business practices, and being selective in choosing partners and projects.”

SMEs should be familiar with Canada’s Corruption of Foreign Public Officials Act, she says, which includes strong measures on how Canadian companies conduct affairs abroad.

“Seek appropriate legal counsel when setting up your business, structuring deals or whenever in doubt about whether or not business practices would contravene the Act,” Wilshaw suggests. “Corruption is never pleasant when it is encountered. Be known as a company that won’t ‘play the game.’”

Companies should also not be in a rush, and find trusted local partners who help navigate “uncertain waters,” she says. “Setting realistic timelines, with plenty of buffer time in order to deal with delays in approvals and processes, will mean you are less likely to be a target for those seeking ‘speed money.’ Be prepared to walk away from projects or opportunities if something doesn’t look right.”

Samson says that foreign companies can sometimes be insulated from corruption, because it is understood to not be part of the culture—and indeed is illegal—back home. “We don’t operate that way, and given the laws in Canada, I’m not prepared to take a risk,” he says, although partnerships with local Indian companies can mean exposure to corruption.

He says the additional challenges that Formglas encountered in the Mumbai airport contract included delays in getting paid, which is especially chronic for foreign companies that can’t stop by a job site regularly. “Your invoices get held at the bottom of the pile.”

The Indian business culture is also hierarchical, which often means that those in senior jobs are not hands-on, he says, while staff at lower levels cannot make decisions. There is a tendency for Indians in business to be overly agreeable and indirect, he says. “When someone says ‘no problem,’ you can guarantee there’s a problem.”

India’s poor infrastructure was also problematic for Formglas in terms of logistics. For example, with roads in “horrendous shape,” it had to beef up the packaging on its prefabricated panels or they ended up getting damaged in transit, he says. “You hear about it, you read about it, but when it actually happens to you, it’s not funny.”

To avoid delays typically related to bureaucracy at customs, Formglas ensures it is only responsible for shipping its goods to port, leaving the customer to clear and transport them to their ultimate destination.

“That’s something for local expertise,” he says. “As a small to medium-sized company, you simply cannot have enough knowledge.”

Wilshaw says the Canadian Trade Commissioner Service, with its network of eight offices around India, can help companies understand the market and connect them to local contacts and potential partners.

Canadian companies need to invest time to build relationships in India, she says, and “a strong local partner will be important to their success.” It’s critical to agree on objectives, set clear expectations and make frequent visits. Ensure that senior management is committed to the Indian market and prepared to invest time and effort in it, and take advantage of expert resources.

“Good advice is out there—consultants and lawyers can help you to avoid common mistakes,” she adds.

He says that Canadian SMEs “should do some serious research” before trying to penetrate the Indian market, looking at the pros and cons of doing business in different regions of the country, for example. Connections are critical; a reliable Indian partner can make valuable local links and help “navigate the shoals.”

Samson says that Formglas now has a representative in India that will help market the company there. It hopes to get a contract for the second phase of the redevelopment of the airport in Mumbai, which includes adding on a domestic terminal, and it will pursue other projects around the country.