Canadian enterprises face a variety of obstacles when trying to export their goods and services abroad.

Statistics Canada recently released results from the second wave of the Survey of Innovation and Business Strategy (SIBS) covering the years 2010 to 2012. The first survey covered 2007 to 2009. The survey asked firms that reported having exported or attempted to export in the three years covered by the survey to rate (high, medium, low, or not an obstacle) the degree to which each obstacle hindered their ability to export. 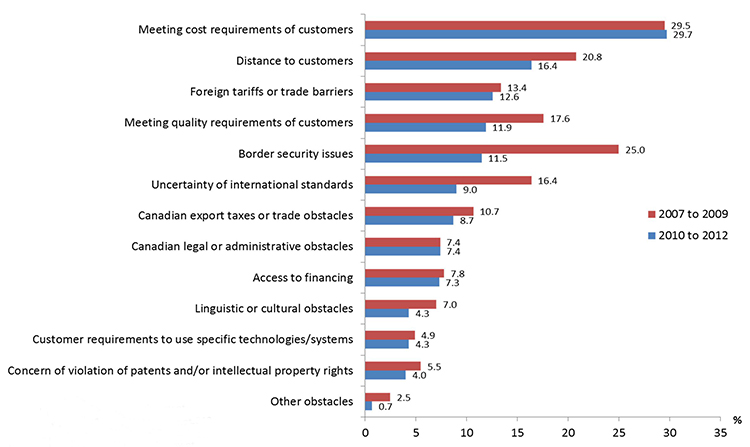 The SIBS found that between 2010 to 2012, “Meeting cost requirements of customers” was the top ranked obstacle to exporting, with 29.7% of respondents indicating this barrier to be highly important, which was little changed from the earlier survey period of 2007 to 2009.

“Distance to customers” and “foreign tariffs or trade barriers” were the second and third-highest ranked barriers in the 2010 to 2012 survey period, with 16.4% and 12.6% of respondents indicating these were highly important barriers, respectively.

While the importance of “border security issues” saw the largest decline between the two periods, similar declines were seen for most other barriers, i.e. a smaller percentage of firms indicated each barrier as highly important in the 2010 to 2012 period, versus the 2007 to 2009 period. The two exceptions to this trend were “meeting cost requirements of customers”, with a slight increase, and “Canadian legal or administrative obstacles” where 7.4 % of respondents considered this obstacle as highly important in both survey periods.

The importance of these obstacles, however, can vary greatly by firm size and type of industry. In general, most barriers were more often ranked as highly important by medium-sized firms than either small or large firms. This may be due to the fact that more exporters in manufacturing are medium-size and manufacturers report encountering barriers more frequently than do non-manufacturers.

More detailed results on barriers to exporting and other questions from the survey of Innovation and Business Strategy can be found on the Statistics Canada website.

Canadian exporters face a variety of obstacles when exporting or attempting to export goods or providing services outside of Canada. Some barriers are inherent to participating in international markets while others can be partially addressed through planning and seeking out the appropriate resources. The Canadian Trade Commissioner Service has trade commissioners in 160 cities abroad and in Canada to help you navigate the complexities of international markets.