The new free trade agreement between Canada and Honduras will benefit Canadian businesses on both sides of the trade equation and will put them on level playing field with competitors from other countries that have trade deals with Honduras, such as the United States. 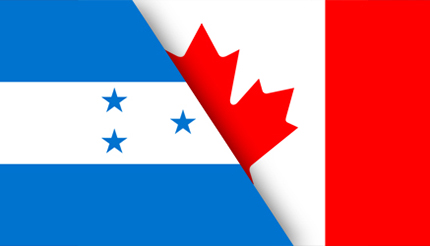 The Canada-Honduras Free Trade Agreement (CHFTA), and the parallel agreements on labour and environmental cooperation, which came into force on October 1, 2014, will help Canadian businesses involved in trade and investment with Honduras.

The agreement is part of an ambitious Canadian trade agenda; since 2006, Canada has concluded free trade agreements with 38 countries, and it is negotiating with more than 30 others.

Mazen Mahfouz, the Senior Trade Commissioner for Honduras, based in Costa Rica, says the CHFTA reinforces Canadian engagement in the Americas, a priority of Canada’s foreign policy.

The CHFTA includes provisions on market access for goods, cross-border trade in services, investment and government procurement. Once tariffs are fully phased out, 98 percent of Honduran tariff lines will be duty-free. Key Canadian agricultural products that will benefit immediately from preferential market access include beef, pork, potato products, vegetable oils and grain products, as well as a range of processed foods. In addition, the elimination of Honduran tariffs will create more export opportunities for a wide range of Canadian products, including chemicals, plastics, pulp and paper, wood, industrial machinery, fish and seafood.

“Honduras is a substantial market, and the elimination of tariffs will support increased Canadian exports,” Mahfouz says, noting that the agreement also includes investment provisions.

Canada and Honduras did $278.7 million in bilateral merchandise trade in 2013, he says, with Canada exporting $43.7 million in merchandise to the country, a figure that increased 13 percent from 2012. There are investment opportunities in the Honduran mining sector, he says, as well as in infrastructure such as renewable energy. Canada would like to see a more secure and stable investment climate for Canadian investors in Honduras and throughout the Americas. The FTA will make a significant contribution to achieving this goal.

The Honduran government is focused on increasing security, creating employment and attracting foreign investment in the country, he says. In mining, it approved a new law in 2013 with a framework allowing for mining concessions to be handed out. The TCS has prepared a guide to assist Canadian companies interested in getting involved in the mining sector.

Honduras is especially known for making textiles and apparel. Indeed, a Canadian vertically-integrated apparel company, Gildan Activewear Inc. of Montreal, is the largest private employer in the Honduras, with more than 24,000 employees in its 13 owned facilities there. Gildan, which had almost $2.2 billion in sales worldwide in 2013, makes basic garments that are mainly distributed within the printwear markets and ultimately used by various organizations for events and promotional purposes. It also has a growing business selling basic family apparel such as shirts, socks and underwear within the retail markets under its own brand.

Peter Iliopoulos, senior vice-president of public and corporate affairs for Gildan, says the company began operations in Honduras in 2001. Gildan found Honduras to be a good location for its Western Hemisphere production and was impressed with the dedication and expertise of its workers, who have become key members of its management team. The company has strong corporate social responsibility and sustainability practices there, with elements from careful environmental measures and employee benefits to spearheading the development of a polytechnic institution to train Hondurans in the textile, apparel and other sectors.

Iliopoulos hopes the CHFTA will level the playing field for its sales of shirts and other apparel in Canada. With U.S. tariffs on apparel products being eliminated under the Dominican Republic-Central America-United States Free Trade Agreement, the U.S. accounts for almost 90 per cent of Gildan’s worldwide sales, worth some $1.9 billion in 2013. Canada represented just 3 percent, or close to $66 million, of Gildan’s 2013 sales.

“The agreement will allow us to be more competitive and more successful in our home country,” Iliopoulos says. He hopes to increase Gildan’s presence in the retail sector in Canada through the CHFTA.

Cesar Urias, director of Latin America and government programs management for Canada Pork International (CPI), which represents pork packing companies and slaughterhouses as well as trading companies, says the CHFTA will be helpful in opening markets in Central America to Canadian pork.

One critical step that has been achieved has been to put a veterinary agreement for pork meat exports in place between Canada and Honduras, he explains, where Honduras accepted Canada’s health-and-food safety conditions.

Pork is one of the main animal protein sources in the region, he says, noting that pork items commonly exported from Canada to Honduras include ham ends, rib ends, brisket bones, cushion meat and bone-in hams. Canadian pork exports are also targeted at a niche, high-end consumers there.

The Honduran duty on pork imports from Canada until now has been 15 percent, he says, and the Honduran market for Canadian pork has been relatively small, especially with duty-free imports from the U.S. pursuant to tariff-rate quotas under the Dominican Republic-Central America-United States Free Trade Agreement. Some Canadian pork products have been selling well in Honduras despite tariffs. Numbers are on the upswing in 2014, and CPI is optimistic that they will improve once the agreement is in force.

“We have everything to our advantage right now—an FTA, a veterinary agreement in place and a product that’s well-received in the market,” he says. “It all seems to be there.”

Mahfouz says that Canada is committed to supporting and promoting economic opportunities in Honduras in a way that will allow trade between both countries to grow. Honduras is one of 20 countries of focus for Canada’s development assistance program, with support in areas such as food security, education, health care and economic prosperity. It is Canada’s largest bilateral aid program in Central America and the second-largest in the hemisphere.

The Canada-Americas Trade-Related Technical Assistance Program (CATRTA), with a budget of $18 million from 2009 to 2016, managed by the Conference Board of Canada, provides trade-related technical assistance to countries in the Americas that have negotiated or are currently negotiating an FTA with Canada. The objective is to increase practical knowledge of exporting, as well as to establish relevant buyer contacts and prospective importer contacts in the Canadian market.

Honduras has five active CATRTA projects, valued at $1 million. They include projects to enhance SMEs’ practical export know-how, to strengthen the country’s labour inspection system and to improve Honduran exporter capacity in the agriculture, textile and consumer goods sectors.