Growing up in rural China in the 1960s, Dr. Jacqueline Shan was fascinated by the healing powers of herbal medicines, dreaming of working with natural herbal medicines and other traditional ingredients that would improve people’s lives. 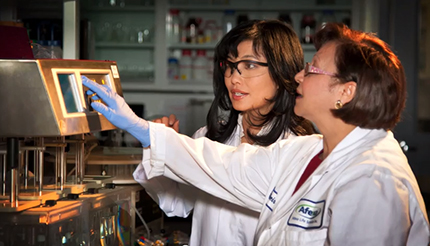 Today as a health scientist and entrepreneur in Canada, Shan is making her dreams a reality. She co-developed the number-one Canadian product for colds and flu, Cold-FX, and is now launching a range of natural health products for the aging population under the Afinity brand.

It’s been a global journey marked by difficulties, perseverance and many lessons learned. Shan has now detailed it all in a book suggesting that with hard work, the right team and a long-range view, it’s possible to develop winning products, overcome obstacles and come out on top.

“If you don’t give up, you’ll be successful,” says Shan, a trailblazer in natural medicine research and health product development who for the last four years has been a member of the Advisory Board on Small and Medium-Sized Enterprises, which advises Canada’s International Trade Minister on SME issues.

Her self-published book, The Jacqueline Shan Story: Pursuing a Dream, Never Giving Up, details what she calls her “great Canadian adventure,” building companies and products that bridge Western and traditional Chinese medicine. She became CEO and chief scientific officer of Afexa Life Sciences Inc., makers of Cold-FX, and raised millions of dollars to develop and market the cold remedy, which outsold the biggest brand names in the market.

Shan was born in Jiujiang, in the eastern China province of Jiangxi. She got a Doctorate of Science in pharmacology from Peking Union Medical College and came to Canada in 1987 to study at the University of Alberta, earning a second PhD in physiology.

“In Canada opportunities really opened up, although there was a very sharp learning curve for me,” she recalls, noting that she never intended to go into business. “I grew up during the Cultural Revolution, so there wasn’t anything entrepreneurial that you could do…Canada gave me a crash lesson so I could be a scientist but I could also be an entrepreneur, to make my dream come true.”

Soon after graduating from the University of Alberta, Shan and a team of scientists and partners created Afexa, which was dedicated to developing natural-source health products based on traditional remedies. She continued to be a scientist but was focused on applied research.

“At the beginning I had absolutely no business training,” she notes. With the company’s initial focus mostly on research, she had a decade or so of “transition time” to create and then market Cold-FX. “I mostly learned on the job, I learned from other people. I had good people in the team.”

The company needed money to do clinical studies and to develop a strategy and business plan. “We were creating a lot of patents, and you have to think about how you’re going to commercialize your patents,” she says, noting that Afexa almost went broke several times over the course of the 10 years, even having to sell its lab equipment, before it finally caught the attention of investors and then consumers.

“I had to be the CEO and the president, and eventually we had to get out of the lab and we had to launch the product itself in Canada,” she says. “When you’re hands-on in the job, like many entrepreneurs, you eventually become a business person.”

The fact that sales skyrocketed and the company was finally listed on the TSX “was a great accomplishment,” Shan says. “Not only did we have a number-one selling product for colds and flu, but we were able to build an organization and become number one.”

There were “many, many challenges,” she points out, including difficulties finding the funds to support research, especially in “a so-called ‘unproved’ area from a business point of view.”

Once the company had success and was creating its own revenue through sales, it had a different set of hurdles to overcome. “One of our biggest challenges was how we managed our growth, how to build an organization, and how to build a skill-set in such a short period of time.”

Shan says she built the company with an international market in mind for the product. “I always believed it had global potential.” However, in managing growth and trying to go to the United States and countries in Asia “we had big set-backs,” with an insufficient level of expertise and management, she says. “We tried to do too much.”

As a consumer health product, Cold-FX faced different sets of regulations and requirements in every market it targeted. In the U.S., for example, it couldn’t be sold as a cold and flu product but was considered a health supplement, with labelling saying it was only for the immune system. “That’s a big drawback,” Shan says, noting that to make a cold and flu claim in the U.S., as Cold-FX does in Canada, it could have taken some 15 years of trials and cost millions of dollars.

“In hindsight, we probably could have waited three or four more years to understand the U.S. market better, and to take a different regulatory path,” she says. The company retreated in its efforts there as well as in countries such as Japan and China. It was bought in 2011 by Valeant Pharmaceuticals, a global company that Shan says has the resources to pursue the kind of global markets she envisioned for the product.

She thinks the experience of trying to take the product global was helpful for her as an entrepreneur. “Those are the set-backs and challenges that make you grow,” she says. “I sometimes treasure that; everything happens for a reason.”

In 2012, she founded Afinity Life Sciences Inc. in Edmonton, with the help of $1.5-million from AVAC Ltd., an Alberta-based investment company focused on early-stage commercial ventures.

Afinity, a private company that today has 10 employees, is working on natural products that address many health issues among older consumers, including cardiovascular health, joint inflammation, brain health and other conditions for women’s and men’s health. Afinity is at Rexall stores and will have its omega-3 supplement products in Loblaws by the end of this year. It is planning to target the international market as well.

Shan says she is applying much of what she learned with Cold-FX to the new company, especially choosing the right people and creating a strong team that allows her to develop and commercialize products more quickly. “The learning curve has paid off,” she says. “Hopefully when we go into the international market that will help us as well.”

Innovation is critical, especially for businesses in the health field, Shan says, noting that the company is working with organizations such as the National Research Council in Canada. “Everyone’s looking for a competitive edge, whether it’s domestically or more importantly in the international marketplace. You need to have that innovation in order to be able to compete.”

There is still “a lot of homework we need to do before we actually launch the product internationally,” she says. “But hopefully this time around when we go international we will be more successful.”

She has much advice for entrepreneurs, outlined in her book. “Number one is having a dream and working hard,” she says. “You have to have something in your head other than money, that’s one thing that made me successful.”

Other suggestions include addressing “an unmet need” in terms of health issues, and developing a knowledge-based product. “Entrepreneurs start as scientists, engineers and technical people,” she says. “Getting the best education and training really helped me a lot.”

Finding the best people to work with and assembling a business plan that’s executable are important as well. “Execution is everything,” she says, warning that it’s important not to plan too far ahead.

Another tip she has for fellow global entrepreneurs is to take advantage of the Canadian Trade Commissioner Service (TCS), which she calls “the best kept secret in the international market.” She worked with the TCS in exploring export possibilities in the U.S., China, Japan, Hong Kong and Taiwan. Trade commissioners did marketing investigations, found the company contacts and possible partners and arranged meetings, she says, for which it provided venues and translation.

“That’s tremendously helpful for companies—small companies especially,” Shan explains. “More importantly, it helps the Canadian brand. If we go into foreign countries and say, ‘This is a Canadian-made, Canadian-invented product, and we have Canadian support from trade commissioners,’ that adds tremendous confidence and credibility.”

While Cold-FX has not had success globally, Shan believes that Valeant Pharmaceuticals, as a large international company, will have the right strategy to take the product into the world some day. “I hope someday I can see Cold-FX in the United States.”

With the company in good hands, she’s happy to be moving on to health products for older people. “Being an entrepreneur that’s one of the joys, you continue on your path,” she says. “We’re just keeping our heads down now, trying to grow as fast as we can in Canada, and hopefully some day we’ll move into the global space.”