Canadian foreign affiliate (FA) sales1 increased from $350 billion in 2002 to $500 billion in 2012, gaining importance relative to Canadian exports of goods and services over this period. 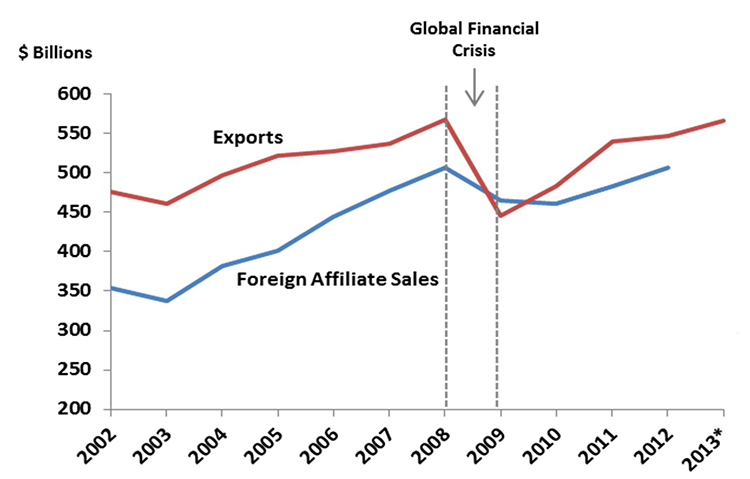 * FA sales data are released with a lag; the latest data released from Statistics Canada is for the year 2012.

In 2012, FA sales were equivalent to 93 percent of exports, up from 74 percent in 2002. Although the growth of FA sales varied over this period, FA sales held up better than exports during the global financial crisis (2008 to 2009). During the crisis, exports plummeted 21.4 percent, while FA sales fell only 8.4 percent. In the post-crisis period (2009 to 2012), exports rebounded quicker than FA sales; however, FA sales continued to rise as a share of exports.

Learn more about the Office of the Chief Economist.

1 Canadian Foreign Affiliate Sales data consists of the sales of goods and services of affiliates abroad that are majority-owned (i.e. more than 50 percent of the voting shares) by a business that resides in Canada.