Businesses owned by recent immigrants to Canada have the potential to expand Canadian exports to emerging markets, a new study has found.

Given their familiarity and comfort with different languages and cultures, as well as their impressive business connections abroad, immigrant entrepreneurs are diving into non-traditional markets, the study showed, while largely staying away from more stagnant markets in the U.S. and in Canada. 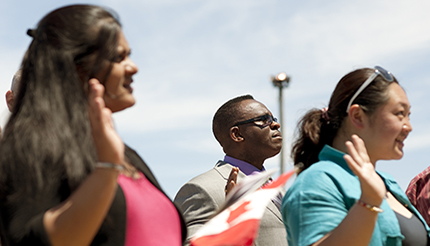 However, the most successful immigrant businesses operating in emerging markets tend to be small and lack the innovation and knowledge base necessary for significant growth, it found. Meanwhile, those companies that are innovative are not necessarily able to thrive because they can’t get the financing they need, and public policies are not in place to assist them.

The study, produced for the Conference Board of Canada and released in a report titled Selling Beyond the U.S.: Do Recent Immigrants Advance Canada’s Export Agenda? suggests that more support is needed for innovative immigrant-owned companies that sell to high-growth markets.

“Our diversified immigrant population makes a huge contribution to Canada’s export success,” says report co-author Dr. Sui Sui. “If we just give them a chance, they can become important strategic assets for the country.”

Sui and fellow co-author Dr. Horatio Morgan, who are both assistant professors in the Global Management Studies Department of the Ted Rogers School of Management at Ryerson University in Toronto, analyzed more than 15,000 small and medium-sized businesses for their study, singling out those owned by immigrants who have been in Canada less than five years.

The study found that these business owners are 1.6 times more likely to select non-U.S. markets over the Canadian market than non-immigrant business owners. Also, companies owned by recent immigrants that export to non-U.S. markets are among the fastest-growing SMEs. From 2007 to 2011, the profits of such businesses grew at an average annual rate of 21 percent, compared with a 2 percent decline for their non-immigrant counterparts.

The report notes that a key goal of the Canadian government is to increase Canada’s exports to emerging markets. As recent immigrants have an advantage in terms of foreign language skills, cultural knowledge and access to networks in their countries of origin, then they are better positioned to sell to non-U.S. markets. However, they make goods and services that largely compete on price rather than novelty and innovation, and are therefore less viable in the long-run.

Sui, who came to Canada in 2001 as a student from China, where she had worked in an import-export company, notes that recent immigrants account for 3 percent of SMEs in Canada—or almost 30,000 SMEs. Many come here as immigrants or having worked as top executives and entrepreneurs in their countries of origin. Once in Canada they work with different products and resources, she says, but they have the knowledge and mindset of good exporters.

“They still have the skills they learned in their old country, and the networks and the people they knew there,” Sui says. Such skills and connections can “help them get things started,” she remarks, although they mostly work with low-margin products in the retail/wholesale trade, they don’t have niche offerings and are ultimately less operationally efficient.

Meanwhile, Canadian businesses have a high failure rate in emerging markets, Sui notes, especially in the first year. One reason for this is they don’t understand the business culture in countries such as China and India. This can include a “different attitude toward time,” she says, which means that appointments are often changed or cancelled and transactions can take a while. “All the deals are made at the dining table, and if you don’t go along with that you have a hard time building the trust relationship.”

Selling Beyond the U.S.

The Conference Board study indicated that immigrant-owned businesses that export to non-U.S. markets are:

Recent immigrants, on the other hand, are well-versed in such customs, and they work in successful SMEs as well as own them, Sui points out. Small businesses are often reluctant to hire immigrant workers out of concern for language and cultural barriers in the workplace dynamic, but employees from diverse backgrounds can help companies develop markets and deal with suppliers and customers in the emerging world, she says. “That’s a huge asset.”

Nytric Ltd., a venture technology company in Mississauga, Ont., that helps develop new products such as consumer electronics and medical instruments, has learned that lesson well. With 90 percent of its business coming from outside of Canada, the company has some 10 nationalities among its 22 staff members and a “fundamental philosophy” that embraces diversity, says Anthony Gussin, Nytric’s director of business development.

Gussin, himself an immigrant from the U.K., says that company founder and CEO Av Utukuri, who is from India, has strategically built a team of engineers and directors who are deeply rooted in the international community and can leverage their experience to enter new markets.

When immigrants apply for jobs in most companies, Gussin comments, they are typically asked what Canadian experience they have and how long they’ve been here. But Nytric considers its employees’ experience in “all different parts of the globe” helpful, he says, for instance because it makes them more resourceful when coming up with solutions to problems.

The atmosphere in a workplace with so many different cultures is collaborative and open-minded, he adds, and there are practical advantages, too. “The ability to speak to a customer overseas in their own language is hugely beneficial.”

The Conference Board study found that immigrant-owned businesses that export to non-U.S. markets are concentrated mostly in Ontario and Quebec. Female ownership is high among those immigrant businesses that export to non-U.S. markets, it discovered, with almost one-third of female ownership. The study also found that the most innovative immigrant exporters sell to the U.S., allocating four times the amount on R&D than those immigrants who export beyond the U.S.

One major stumbling block for immigrant-owned companies that export is getting financing, and the problem is greatest among those with “less tangible assets,” Sui says. This means that innovative businesses with a focus on R&D must look to angel investors and venture capitalists for funds.

Radha Radhakrishnan, president of RK Global Consultants Inc., a boutique consulting firm in Toronto that provides financial and management consulting services to companies doing business abroad, says that immigrant entrepreneurs have many strengths, including their education, experience, contacts and the money they bring to Canada. But they find it hard to “navigate within Canadian business circles” and are foiled by the banking system here.

Radhakrishnan, who comes from Sri Lanka and has worked in banks in Sri Lanka, Pakistan, Germany and Canada, has a 35-year background in banking and finance. He says that Canadian banks will only lend money against a company’s assets that have already been created in their balance sheet and against bricks-and-mortar holdings.

Immigrant start-ups often don’t have such assets on their balance sheets but are looking for “transactional trade financing,” where money is loaned so they can get the raw materials to make their products and ship them, based for instance on a letter-of-credit or a purchase-order from a buyer.

“They need the money to do the business rather than getting money for business they’ve already done,” Radhakrishnan says, adding that the government should take the leadership in encouraging banks to allow for such forms of non-traditional lending. “If we had the proper finance tools, we would be quadrupling what Canada is exporting through our immigrants.”

Sui says that the policy implications of the Conference Board study could include finding ways to utilize the knowledge of immigrant entrepreneurs, while helping their operations become more innovative in the global marketplace.

For example, programs where immigrant and non-immigrant business owners connect to share their knowledge and experience would be beneficial, as would government support for R&D efforts among immigrant-owned companies that focus on emerging markets.

Sui is planning to study more recent data on all immigrants to Canada who own businesses and whether they are more successful at exporting. She is also looking at their mother tongue to see whether there is an “insider effect” for immigrants who can speak foreign languages.