From long-shot to global technology powerhouse

As an electrical engineer working in telecommunications in the 1990s, Leslie Klein thought ahead. At a time when the Internet was mostly a promise and cellular phones were huge and expensive, he saw a need for technology that could take mobile computing and telephony a vast step forward.

Klein envisaged a future where large amounts of data would be transmitted at high speed virtually anywhere in the world. He started an Ottawa company, C-COM Satellite Systems Inc., which developed antennas to allow for easy Internet connectivity via satellite everywhere from congested cities to the most remote corners of the earth. 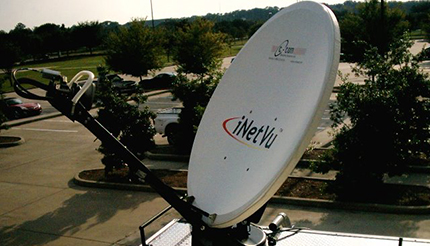 “It was a long-shot when I started this business to even imagine that we would succeed,” recalls Klein, the company’s president and CEO. “Nobody thought that something like this could be done 17 years ago. I had no idea how far we would go.”

Today C-COM has sold more than 7,000 of its iNetVu mobile antennas and counting, with a successful dealer strategy and a massive export market among a wide variety of industries, from humanitarian disaster relief and mobile banking to surveillance and law enforcement. With sales in 103 countries, future applications of the technology are limited only by the imagination.

“The sky truly is the limit—every week we hear about a new use for it that someone in the world has,” says Klein, who immigrated to Canada from Czechoslovakia in 1968 as a first-year university student, speaking no English. He studied electrical engineering at the University of Waterloo and following graduation worked at Hewlett Packard and then Bell Northern Research in Ottawa.

He started C-COM in 1997, hiring a core of engineers to begin working on his idea of delivering high-speed, broadband Internet via satellite into stationary vehicles or moveable structures, financing the company for three years himself.

“It was a calculated risk, but a huge one,” he recalls. The company went public in 2000 and raised $5-million to continue its research and development on the iNetVu. Klein proudly points out that it has “never gone back for more money.” The SME is publicly traded on the TSX Venture Exchange (trading symbol CMI). “We’ve had 10 consecutive years of profitability, we have no debt and this is the only company on the TSX Venture with capitalization of under $100-million that pays dividends,” he adds. Last year C-COM had $15.5-million in sales of its antennas, 98 percent of which are exported.

He says the company has aggressively gone after international sales, while many Canadian companies “don’t go outside their comfort zone of dealing with the United States.” At the same time, C-COM was careful not to establish offices overseas, which he says can be “suicidal” for SMEs with limited resources to sustain, because they are costly, complex and difficult to manage.

Some 1,500 of the antennas sold to date are being used in oil & gas exploration. Klein says that companies searching for oil “in the middle of nowhere” use them to transmit the results of their geological data for analysis as well as for Internet access, email and voice communications.

In Africa, the antennas are protecting the rhino population of the massive Great Limpopo Transfrontier Park, where they relay data and video from surveillance drones looking for poachers. In Japan following the 2011 earthquake and tsunami, more than 300 of the antennas were deployed for cellular communications, replacing downed cell towers. In the remotest reaches of Africa, in Hawaii and even in downtown Madrid, they allow banks to operate roving ATMs. They have also been used atop mobile medical clinics in Canada, Russia, South Africa, the U.S., Nigeria and New Zealand.

Other ubiquitous uses include news gathering, so that television crews can transmit video reports via satellite. Fire and police departments use them in mobile command centres during emergencies.

The antennas look much like the satellite dishes used to bring television programming into homes, but they transmit as well as receive signals using a high-speed broadband modem provided by a satellite service provider.

The antennas are “plug-and-play,” meaning they work in locations from Siberia to Australia, but C-COM must meet the stringent technical requirements of each satellite system and be approved for the provider’s network.

The antennas are necessary because the internet connectivity of typical satellite telephones is minimal and they operate at low speeds, Klein says. Transmitting huge files like streaming video can take hours—even days—and be very costly.

The 3G networks used by cellular telephones similarly cannot download and transmit the amount of data that high-throughput satellites can deliver and of course only work where there is cellular coverage. Klein says the expectations of sending large amounts of data are exponential. “The bandwidth demand is growing more rapidly than ever can be delivered; it’s never enough.”

The C-COM antenna is particularly unique in that it can be easily moved from location to location. It must be stationary to work, but at each new position, with a simple press of the button, the antenna quickly locks into the signal from the satellite, 36,000 kilometres above the earth’s surface.

Klein says that normally it can take a skilled satellite antenna technician two hours or more once an antenna is repositioned to find and receive a satellite signal. The iNetVu’s robotic “auto-pointing” or “on-the-pause” mechanism locks in and is ready to go in a couple of minutes. “All you have to do is push a button and it does the rest.”

In the rhino project, which covers an area of 35,000 square kilometres on the border of Mozambique, South Africa and Zimbabwe, the technology allows park rangers to monitor, record and respond to illegal poaching activities. The park is home to 40 percent of the world’s rhino population and has recently become the frontline of the rhino poaching wars, with one of the animals killed by poachers every eight hours.

Gustav Engelbrecht, product manager of satellite systems at Saab Grintek Technologies, a C-COM iNetVu integrator based in South Africa that is sponsoring the project, says that combining the antenna with the drones, which are equipped with infrared cameras and thermal sensors, is perfect.

“Having the C-COM mobile unit as the main means of connectivity during this operation has proven to be the best decision we made. The success and the availability of the system has become the norm,” Engelbrecht says.

The Gloucestershire Fire and Rescue Service in southwest England has four of the C-COM antennas, which work on two different satellite bands, among the equipment it uses for local incident command and national logistics support. Mounted on vehicles or in trailers, they have been used to respond to a wide range of emergencies including massive chemical and forest fires and widespread flooding, which is common in the region.

“The technology has been a game-changer in the way we run incidents,” says Rob Lacey, head of IT and communications for the service. “It really proves itself.”

His organization has converted a public bus into a mobile command unit, with the iNetVu positioned on top. Inside are banks of computers and laptops that can be used to communicate with hospitals or other authorities via Skype or VOIP telephony, for example, as well as to monitor streaming newscasts and to co-ordinate activities and staff at the scene.

Regular cellular services aren’t always reliable in emergencies, especially if the power is out, Lacey says. They also can’t handle the “sheer volume” necessary, particularly when everyone wants to use them at once. “If the networks get busy, you can’t do anything,” he explains.

The C-COM system, on the other hand, “always works,” he says, with the iNetVu antenna simply running on the power from a vehicle so that crews can operate independently. They almost instantly find the satellite signal each time it’s moved. “Before, you would have been up on the roof with a spanner, a meter and a compass to manually point the antenna,” he explains.

The service has brought the iNetVu to national emergencies such as urban search-and-rescue operations, mass decontamination sites and large fires. The antenna was also used in an exercise where it provided wireless internet for residents “staying” in a temporary evacuation shelter, as a public service.

Klein says that there are more and more novel uses for the technology popping up all the time. Despite skyrocketing demand, the key to C-COM’s success has been keeping the company small, with just 32 staff. They are responsible only for design and development, he says, while the manufacturing of the antennas is outsourced to companies in Ottawa and Toronto.

C-COM also doesn’t sell its products directly to end-users but through a network of resellers throughout the world. These dealers are responsible for first-level technical support, installation and assistance with connectivity.

“If we had to be in 103 countries, we would have gone broke a long time ago,” Klein points out, adding that the Canadian Trade Commissioner Service (TCS) has especially been useful in introducing and assisting C-COM in countries around the globe.

“We couldn’t have done much without them,” he says, noting that the TCS helps the company vet resellers, provides market intelligence reports and offers “indispensible” advice, as well as arranging myriad meetings with potential customers. “C-COM from Ottawa calling a company like Mitsubishi or NEC in Japan and asking for an appointment is one thing; the Canadian Embassy in Tokyo making the call is another.”

Eleonore Rupprecht, a trade commissioner in Toronto who is responsible for helping Canadian companies involved in wireless technologies find markets abroad, says that C-COM has made good use of the service’s international network.

She says that C-COM’s dealer network is the right way to go. “One of the keys to successful business in any given market is having a local presence,” she says, noting that the company has a winning diversification strategy, going after myriad geographical as well as vertical markets.

Klein says that C-COM has benefitted from its strong presence in trade shows, and finds many of its buyers via its website. “When you have a good product, the customers come to you.”

The company’s competitors deal primarily with military users at a much higher price-point than C-COM, which focuses largely on the commercial market as well as some military and specialty customers.

Lacey says the product is robust, with the Gloucester fire service still using an antenna that has been in service for a decade, and “C-COM comes in at a price and a functionality standpoint” that can’t be beat. Other self-pointing systems are 50 percent more expensive and take much longer to get, and they don’t come with the Canadian expertise in mobile computing. “You have reputation for it, honestly, a lot of great technology comes out of Canada.”

Rupprecht notes that beyond developing and marketing leading-edge products, Canadian companies like C-COM also promote Canada’s values abroad. With the antenna’s uses in humanitarian, sustainability and environmental fields such as the rhino project and tsunami relief, “C-COM goes beyond selling technology, they are representing Canada in the world,” she comments.

The future is bright for satellite-based connectivity, Klein says. He predicts that the antennas will be made ever-smaller and cheaper and eventually become a consumer product, especially as each new generation of satellites hovering over the Earth becomes more powerful.

Bringing continuous satellite connectivity to moving vehicles, boats, trains, drones and the like is the next hurdle that C-COM is tackling. The fact that the connection is lost each time the antenna moves makes full mobility challenging. C-COM is working on this “auto-tracking” or “on-the-move” technology, in conjunction with the University of Waterloo and with assistance from the Government of Canada and the Province of Ontario.

In the future Klein expects that every form of transportation will have the ability to use broadband in transit, regardless of where it is, and cars will even be connected to each other by the technology.