How large is Canada's trade deficit with China?

China, now firmly in place as the world’s second-largest economy, is also Canada’s second-largest export market as well as our second-largest source for imports. However, it has often been said that this significant flow of goods is one-sided, with Canada importing much more merchandise from China than they import from our country.

However, new statistics released by Statistics Canada put this view in another perspective, showing that Canada’s trade deficit with China may not be quite as large as initially thought.

Canada Trade in Goods with China, BOP and Customs Basis 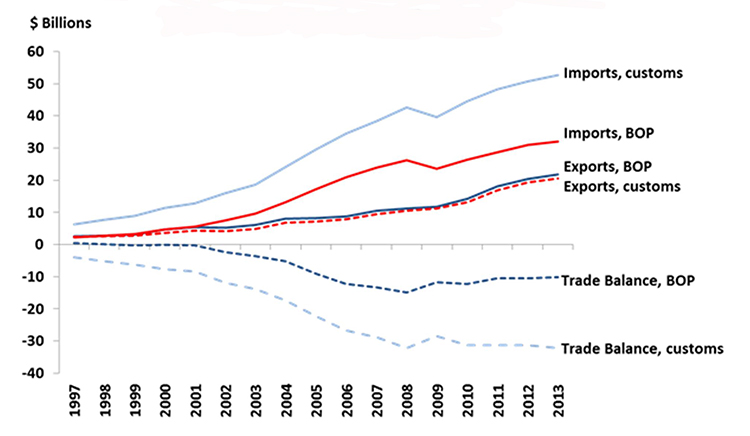 Until recently, Canada-China trade has only been reported using customs-based trade data, so called because it captures the movement of merchandise across the border. However, Statistics Canada recently expanded their geographic coverage of balance of payments (BOP) data to include Canada’s trade with China1. BOP data tracks trade by country of ownership, as opposed to country of origin (where a product was grown or manufactured) as is the case with the customs data. This has significant implications for Canadian trade statistics2 — especially for China.

According to the newly available BOP data, approximately two-fifths of Canada’s imports from China are owned by other countries. As a result, on a BOP basis, Canada’s trade deficit with China is only a third of what is reported on a customs basis. This is mainly due to the fact that China has a significant amount of manufacturing and processing facilities, and in many cases, a company outside of China is coordinating the production carried out in these facilities and is responsible for the final sale of the goods produced. As a result, in 2013 Canadian BOP imports from China were $20-billion lower than customs-based imports3 . In the case of Canadian exports to China, because there is no adjustment for ownership, there is only a small difference between BOP and customs figures; in 2013 Canadian BOP exports to China were $2-billion higher than customs-based exports. Due to the significant decline in imports, and the small rise in exports, Canada’s trade balance with China falls by nearly two-thirds to $10 billion in 2013 when recorded on a BOP basis, compared to $32 billion on a customs basis.

When recorded on a Balance of Payments basis, Canada’s trade deficit with China is a third of that recorded on a customs basis. This illustrates the complexity of global production, with significant implications in how it is measured.

1 As of the third quarter of 2014 Statistics Canada expanded their coverage of BOP data to 27 partner countries from its previous limited coverage of only three countries (U.S., UK and Japan) and three aggregate regions (Other EU, Other OECD, and Other countries). Data will now be available for countries such as China, Mexico, Brazil, India and South Korea as well as Canada’s largest EU trading partners.

2 For more information on the expanded geographic coverage of BOP data and how it differs from customs-based data see: Balance of Payments trade in goods at Statistics Canada: Expanding geographic detail to 27 principal trading partners by Statistics Canada.

3 Of the $20 billion difference, $15 billion worth of goods had China as the country of origin but is attributed to the U.S. as the country of ownership, indicating that they were purchased by Canada from the United States. A further $4 billion was accounted for by Hong Kong and the other $1 billion spread among other countries.